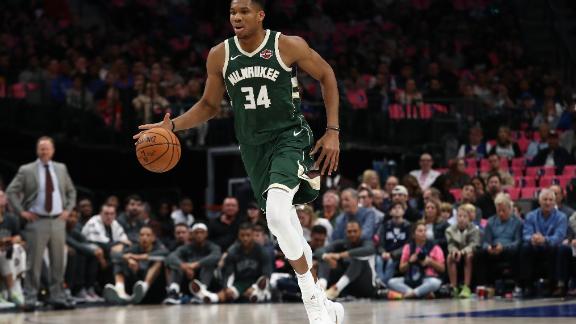 Basketball stars hit the streets of the City of Light as part of their trip for the 2020 NBA Paris Game. The Milwaukee Bucks and Charlotte Hornets will take to the court on January 24 at the AccorHotels Arena.

Paris has hidden gems aplenty if you know where to look, but one of the French capital's best kept secrets is the world's oldest original basketball court.

The historic hoops venue is buried in the basement of a building a stone's throw from the famous Folies Bergere theater in the northern ninth arrondissement.

And as the NBA arrives in Paris this week, so does one of the lucky few to have dribbled on its fabled floorboards.

Nicolas Batum, captain of the French national team -- Les Bleus -- returns home with the Charlotte Hornets as they face off against the Milwaukee Bucks Friday.

It will be the first regular season NBA match on French soil as the league seeks to develop its European market. But not many of Batum's teammates know about the 127-year old treasure nestled nearby that was ground zero for the game's European growth.

Completed earlier that year, the building housed lodging, a canteen, classrooms, a library, and a sports complex in the basement -- notably a basketball court built as an exact replica of the one in Springfield, Massachusetts, the game's birthplace.

However, today the Rue de Trévise building, which survived two world wars and is a designated historic landmark, is facing the ravages of time.

In continuous use since it first opened, the building needs several million dollars worth of renovations, a sum made all the more expensive because restorations must meet French Heritage requirements to return the premises to their original 1893 state.

For architect Christelle Bertho, who works with the UCJG on preserving its cultural heritage, the needed renovations are not just about the building. They're part of basketball's original ethos.

"Basketball is part of the YMCA motto, 'mind, body, spirit,'" she explained. "It is the whole. The whole building needs to be renovated for the gymnasium to be alive."

The UCJG launched a GoFundMe campaign to garner public awareness of the building's history and so far it has raised 80,000 euros ($88,692).

It helps that some NBA players support the UCJG's efforts. In 2018 Stephen Curry and Neymar filmed a Players Tribune video essay on the court while former Les Bleus captain Boris Diaw collaborated on a special fundraising video highlighting the historic court.

Batum has taken over the mantle of the French team's captaincy, but he and Diaw both support preserving the rue de Trévise and generating greater public awareness of this basketball treasure

"I hope we can do something to keep that structure intact because this is history," Batum said.

That's a point of pride for UCJG director Sylvie Manac'h.

"Basketball was invented by a YMCA physical educator," she said of the game's 1891 founding father, James Naismith.

"As the Rue de Trévise building was constructed at the same time, they naturally decided to utilize it to introduce the sport of basketball to Europe."

It is the architectural features of the Parisian court that make it stand out.

"The YMCA had a very specific way of building its gymnasiums," Bertho explained, noting the elevated running track above the basketball court and the two weight-bearing pillars in the middle of the court, typical for YMCA structures of the era. The sunken court features herringbone patterned wood panels, imported from North America, set atop a bed of sand.

These distinctive features set the Paris court apart from other terrains of the era where basketball was played, like the one in St. Stephen, New Brunswick. While the Canadian space may have hosted basketball matches, the differences in claims are clear for Manac'h.

French Basketball Federation (FFBB) archivist Daniel Champsaur concurs. "The Rue de Trévise is in a different category than the Canadian court," he said. "The Canadian one was not built specifically for basketball."

Moreover, Champsaur noted, the rue de Trévise building was constructed with US and French funds, another attribute which sets it apart. "It was a strong symbol, the court was the heart of the YMCA's French-American collaboration," he said.

Even so this extraordinary story was forgotten for much of the 20th century.

Paul Odonnat and Bakary Sakho, co-founders of youth basketball program All Parisian Games, grew up in the 1980s playing basketball around the city, connoisseurs of the game's history and culture. But for them, the Rue de Trévise story is detached from many players' lived reality.

"Nobody from our generation knew about that court," Odonnat said. "People within the basketball community know about the Pigalle court, the Stalingrad court," referring to two of Paris' iconic outdoor courts. "But not the Rue de Trévise court."

In recent years the YMCA has worked with the FFBB, International Basketball Federation (FIBA), and other organizations to make more people aware of this unique sports fixture and reintegrate the rue de Trévise court back into hoops history.

Since 2014, this living piece of history has been open to the general public during the annual Cultural Heritage Day. In September 2019, some 1,5000 visitors came to experience the world's oldest original basketball court and learn a little hoops history, according to Manac'h.

Batum shares this enthusiasm for the Rue de Trévise court.

A Les Bleus fixture since 2009, Batum only learned about the Rue de Trévise court in 2015 when the FFBB did an event there prior to hosting that summer's EuroBasket tournament.

"You really can't explain it," he said, trying to relate what it felt like when he first discovered this special court in 2015. "The atmosphere was different. You could sense there was some history in this [place]."

The structure's many unique characteristics immediately stood out. The court is not big enough for a modern day five-on-five game as it is much smaller than today's courts, and the sand underneath the floor boards creates interesting sensations for players.

"You can feel [the sand] under your feet, sometimes [the floor] was a little bit bouncy" Batum recalled.

"When you walk on it, you can see the difference. You can see that man worked on the wood to be sure it was perfect for a basketball court. That's what makes it so special."

Playing on such a historic and iconic, if not well known, court was an experience for Batum.

"When you love the game of basketball," he said, "as a basketball player you have to love the story of that court."

"It's very cool to be on the court," he related of discovering this secret gem. "To have a really historic court be in France, in Paris, that's really amazing."