Surgeries are being postponed because of a surgical gown shortage 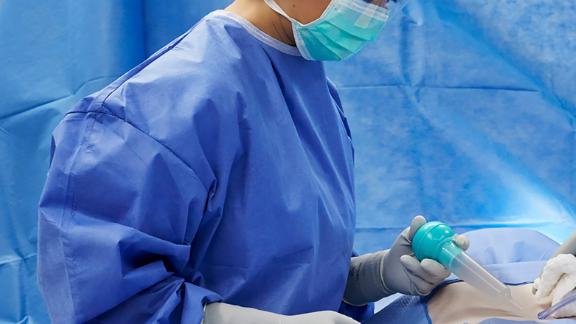 When the patriarch of a Boston-area family was diagnosed with stage 3 pancreatic cancer, the family was told he needed to start treatment immediately.

But at the first oncology appointment at Newton-Wellesley Hospital earlier this month, the family was told he couldn't have the procedure right away, the man's son-in-law told CNN affiliate WBZ. The surgery would have to wait up to two weeks.

The reason? A surgical gown shortage -- one that's affecting the whole country.

Cardinal Health, a large manufacturer of surgical gowns, told customers this month to stop using its Level 3 surgical gowns, along with the procedural packs that contain the gowns.

The company discovered some of the gowns were produced in "unapproved locations that did not maintain proper environmental conditions as required by law, were not registered with the U.S. Food and Drug Administration (FDA) and were not qualified by Cardinal Health," the company wrote in a statement.

The recall is voluntary and the FDA isn't aware of patients being harmed because of the gowns, the agency said. Yet Cardinal Health has quarantined the gowns, held distribution and "started communication with customers" that the gowns were removed from use.

More than 9 million gowns are included in the recall, including 7.7 million that were distributed to 2,807 facilities across the country.

The FDA said in a statement it is working closely with Cardinal Health to address the issues with the Level 3 gowns, which are worn during instances such as arterial blood draws, inserting IVs and in trauma cases. Level 3 gowns are also used commonly in emergency rooms and are worn to protect hospital workers from infection or illness, according to the FDA.

To temper the impact of the recall, Cardinal Health has been increasing production of similar products and offering its Level 4 gowns instead. It is also working with competitors to bridge the supply gap and has ended the relationship with the manufacturer.

But the company's efforts haven't ceased the impacts of the shortage. Though the man at Newton Wellesley was able to get timely treatment after pressing the hospital, his son-in-law said, patients in other areas of the country have faced delays in treatment.

It's unclear when Cardinal Health will have Level 3 gowns ready for use.