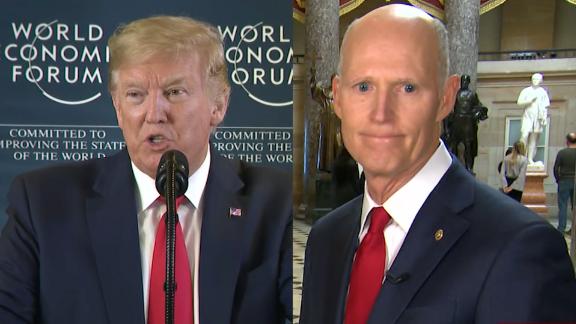 Sen. Rick Scott (R-FL) resacts to President Trump's comments that the injuries American soldiers sustained in an Iranian airstrike as "not very serious" relative to other injuries.

In Davos, Switzerland on Wednesday, President Donald Trump faced pointed questions about the disparity between his initial remarks that no US service members had been injured in the Iranian missile strike on Al-Assad Air Base in Northern Iraq and more recent reports that troops were being treated for those injuries in Kuwait and at Landstuhl hospital in Germany.

"I heard they had headaches and a couple of other things," said the President, "but I would say, and I can report, it's not very serious."

When a journalist asked, "So you don't consider potential traumatic brain injury serious?" Trump responded, "I don't consider them very serious injuries relative to other injuries that I've seen."

The report of 11 (maybe more) service members being evacuated to either the hospital in Kuwait or the Landstuhl Regional Medical Center in Germany after a major missile strike -- one which subjected these soldiers to hundreds of pounds of pressure that was much more significant than any roadside bomb -- was a prudent decision, as commanders and their staff surgeons place caring for those in their command as a top priority.

I would have done the same had I been in command. That's because those who know about these things understand a blast injury can result in much more than a "headache," and the lack of transparency in treatment may very well contribute to serious and even debilitating injuries.

In early 2003, when smaller improvised explosive devices (IED) began appearing in our area of operations in Iraq, many tactical commanders also believed blast injuries weren't all that serious.

Traveling with my team just south of Baghdad in a three-vehicle convoy in September, 2003, a device detonated under the front of our High Mobility Multipurpose Wheeled Vehicle (HUMMWV). The blast flattened two of our tires, shattered our armored glass window and blew off both the rear view mirrors, but fortunately the four of us inside the vehicle did not suffer any noticeable injuries. I remember one soldier on the team telling those repairing our vehicle that while our truck took the majority of the hit, the blast still "really rang all of our bells."

Those smaller IEDs we hit in September south of Baghdad later became bigger ones across the country. The enemy adapted, learned and began using larger artillery shells instead of smaller mortars for the blast effect, and some insurgents even started importing new explosively formed penetrators (EFPs), designed to penetrate heavily armored vehicles, from across the border in Iran.

The results were devastating and caused deadly injuries to soldiers and extensive and massive damage to previously indestructible vehicles. Commanders began closely studying this "new" weapon of war, and the Department of Defense even established an organization with the goal of totally defeating IEDs on the battlefield. This new organization -- sometimes compared to the Manhattan Project of World War II that developed the atomic bomb -- was called JIEDDO, or the Joint IED Defeat Organization.

Even with the creation of JIEDDO in 2006, when I returned as the commander of a multinational task force in northern Iraq in 2007-08, the vast majority of casualties sustained by our US soldiers and in our Iraqi cohort divisions were the result of blasts from IEDs. The deaths and grievous bodily injuries haunted me as a commander and haunted the comrades of the victims. But truthfully, we were only seeing the apparent physical results of these attacks.

And make no mistake, those physical injuries were extensive, as evidenced by one study of the nature and extent of US combat casualties in Iraq and Afghanistan between 2003-2011 showing that explosions were the most common cause (70%) of injuries, while 18% of wounds occurred as a result of gunshots.

What wasn't as obvious to us back then but what has since been reported by medical researchers both inside and outside the military is the relationship of such blasts to traumatic brain injury.

Most traumatic brain injuries related to combat are what physicians classify as mild Traumatic Brain Injuries (mTBI). Researchers claim the prevalence of this wound of war has affected as many as 320,000 military personnel who have been deployed over the last 16 years of war to Iraq and Afghanistan.

Even with so many cases, the effects of blast injuries related to mTBI are still difficult to diagnose and not very well understood, but ongoing research suggests a soldier who undergoes at least one such injury has the potential to experience brain cell atrophy, accelerated age-related neurological degeneration, development of PTSD, Parkinsons and Alzheimer's disease, and in few studies may have ideations of suicide.

After several years of work and extensive studies on this topic, the Department of Defense (DoD) and the Department of Veteran's Affairs (VA) co-published guidelines for the management and treatment of concussion and mild-traumatic brain injury in February 2016. The management protocols provide a step-by-step decision tree to ensure the proper treatment of those who are subjected to a major explosion.

President Trump suggesting that these injuries were simple "headaches" indicates he does not know or understand the seriousness of these silent wounds of war. Military medical professionals -- as well as the DoD, VA, commanders, physicians and healthcare providers -- all take traumatic brain injuries and their effects seriously.

Perhaps the Commander-in-Chief who repeatedly proclaims his love for the military may want to learn more about this trauma and congratulate the commanders who transferred these military professionals to medical facilities for rapid treatment and safe recovery.