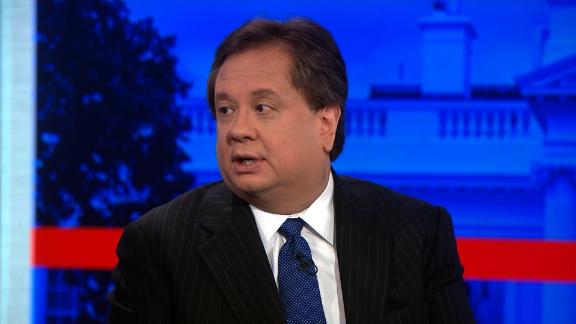 George Conway responded to an argument posed by White House counsel Jay Sekulow during the Senate impeachment trial, saying the problem with the GOP defense isn't whether President Donald Trump is allowed to withhold aid, it's why Trump withheld aid from Ukraine.

We're still going through the transcript of the proceedings and will add to this list as necessary.

Arguing that the House's impeachment inquiry was unfair to Trump, White House counsel Pat Cipollone complained about the closed-door House committee hearings at which witnesses were questioned in a room known as a Sensitive Compartmented Information Facility, or "SCIF."

"Not even Mr. Schiff's Republican colleagues were allowed into the SCIF," Cipollone said, referring to House Intelligence Committee chairman Rep. Adam Schiff, who is also the Democrats' lead impeachment manager.

Facts First: This is false. As Schiff noted in his response to Cipollone, the 48 Republican members of the three committees holding the closed-door hearings -- Intelligence, Foreign Affairs and Oversight -- were allowed into the SCIF, and they were given equal time to question witnesses.

Schiff said he would not suggest "Mr. Cipollone would deliberately make a false statement," but he said, "I will tell you this: He's mistaken. He's mistaken." He added that Republicans were not only allowed in but "more than that: they got the same time we did."

The articles of impeachment

Cipollone claimed that Democrats withheld the articles of impeachment for more than a month. "They held these articles for 33 days," he said. Trump lawyers Patrick Philbin and Jay Sekulow used the same "33 days" figure -- Sekulow repeatedly.

"Thirty-three days -- 33 days, they held onto those impeachment articles -- 33 days. It was such a rush of national security that -- impeach this president before Christmas that they then held them for 33 days," Sekulow said.

Facts First: While House Democrats did wait before they transmitted the articles of impeachment, they took 28 days, not 33. The House voted to impeach Trump on December 18, Democrats sent over the articles on January 15.

Sekulow alleged that Trump's constitutional rights were violated by the House Judiciary Committee.

Facts First: This is false. The chairman of the House Judiciary Committee, Rep. Jerry Nadler, formally invited Trump to have a lawyer participate in the proceedings in that committee -- but Cipollone declined the offer, saying in a letter to Nadler that "an invitation to an academic discussion with law professors does not begin to provide the President with any semblance of a fair process."

Regardless, Sekulow was wrong when he continued that not having the President's lawyer question witnesses in a House impeachment hearing "violates the Constitution of the United States."

Sekulow might perhaps have made an inadvertent error when he named the Judiciary Committee. Trump was indeed denied the right to have his own counsel participate in the preceding House Intelligence Committee hearings, during which the fact witnesses testified. (A lawyer for House Republicans, Steve Castor, was permitted to question witnesses at the House Intelligence Committee.)

The constitutional rights of criminal defendants, such as the right to have the assistance of counsel and to call and confront witnesses, do not apply to the subjects of House proceedings. The Sixth Amendment, which grants these rights to criminal defendants, begins, "In all criminal prosecutions..."

The timing of the military aid to Ukraine

Cipollone said that the military aid to Ukraine was still delivered "on time": "Only in Washington would someone say that it's wrong when you don't spend taxpayer dollars fast enough, even if you spend them on time."

Facts First: It's not true that the entire aid package to Ukraine was "on time." While Trump did lift his freeze on the aid on September 11, more than two weeks before a September 30 legal deadline, the delay caused by Trump's freeze meant that $35 million of the aid could not make it out the door fast enough to meet the deadline, according to impeachment testimony from Mark Sandy, deputy associate director for national security in the Office of Management and Budget.

To deal with this problem, Congress had to pass an extension of the deadline. "Had that provision not been included, then any unobligated funds as of September 30th would have expired," Sandy testified.

The Government Accountability Office, a nonpartisan watchdog agency that works for Congress, concluded that the aid freeze broke a law, the Impoundment Control Act.

The Zelensky call and the aid

Facts First: This is misleading. The rough transcript shows that while Zelensky did not bring up the security assistance funds in particular, he did raise Ukraine's desire to buy more Javelin anti-tank missiles -- which were not part of the delayed security assistance package on which the impeachment proceedings have been centered, but were clearly important to Ukraine.

In October, Trump's State Department announced that it had approved the possible sale of 150 Javelins, worth $39 million, to Ukraine.

Sekulow said: "And then we had the invocation of the ghost of the Mueller Report, I know something about that report -- it came up empty on the issue of collusion with Russia. There was no obstruction, in fact, the Mueller Report, to the contrary of what these managers say today -- came to the exact opposite conclusions of what they say."

Facts First: Sekulow's wording was too vague for us to declare his claim false, but special counsel Robert Mueller's report on the Trump campaign's relationship with Russia did not come to a conclusion of "no obstruction," nor did it say "the opposite" of Democrats' claims that Trump did commit obstruction.

Mueller laid out multiple instances in which Trump may have committed obstruction, but he explained that he would abide by a Justice Department policy that holds that a sitting president cannot be indicted.

The report said: "...If we had confidence after a thorough investigation of the facts that the President clearly did not commit obstruction of justice, we would so state. Based on the facts and the applicable legal standards, we are unable to reach that judgment. Accordingly, while this report does not conclude that the President committed a crime, it also does not exonerate him."

Attorney General William Barr then determined that the evidence laid out by Mueller was "not sufficient to establish that the President committed an obstruction-of-justice offense."

Egg Bowl kicks off this afternoon

One dead, one charged with murder after fatal Thanksgiving shooting in West Point

Man charged with manslaughter after deadly wreck in Monroe County

Local volunteers giveaway hot meals and clothes to the homeless