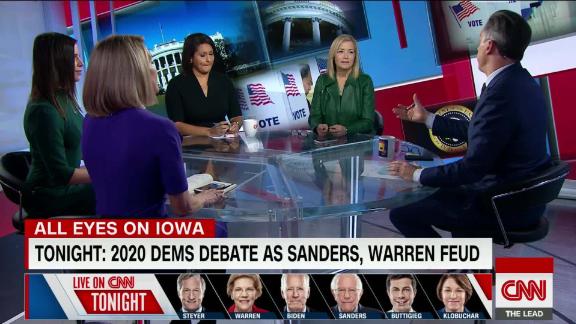 Welcome to CNN's fact check coverage of the last Democratic presidential debate before the voting begins with the Iowa caucuses on February 3. We will post fact checks as we complete them.

The debate was hosted by CNN and the Des Moines Register at Drake University in Des Moines, Iowa. It included six candidates who met the party's qualification criteria, the smallest number to date.

Sanders repeated his claim that NAFTA and permanent normal trade relations with China have cost the US "some 4 million jobs."

"I am sick and tired," said Sanders as he drew a contrast with former Vice President Joe Biden, pointing to large multinational corporations that he says have reaped the benefits.

Facts First: This is likely an overestimate of the impact trade agreements can have on the country's employment.

It's difficult to measure the overall economic impact of the North American Free Trade Agreement since trade and investment trends can be affected by a number of factors, including economic growth, inflation and even a weakening dollar, according to the Congressional Research Service.

Most estimates find that NAFTA had little if any impact on national employment levels, though the effect was uneven across regions and industries.

The left-leaning Economic Policy Institute found that between 1993 and 2013, the US trade deficit with Mexico and Canada increased from $17 billion to $177.2 billion and displaced 851,700 US jobs.

By contrast, the entry of China into the World Trade Organization in 2001 likely had a much larger impact because of sudden competition from cheaper imports. But even the high end of job loss estimates from EPI found that the change in trade status for China caused a loss of 3.4 million jobs between 2001 and 2017.

Another estimate, from a 2016 study by economists at the Massachusetts Institute of Technology, found that normalizing trade relations with China cost the US between 2 million and 2.4 million jobs between 1999 and 2011.

Biden repeated his false claim that he opposed the war in Iraq from the moment the war began.

Biden said he made a "mistake" in casting a 2002 vote, as a senator from Delaware, to give President George W. Bush the authority to go to war in Iraq. But he said he cast the vote because the Bush administration had said "they were just going to get inspectors" into Iraq to check for weapons of mass destruction -- and that, once Bush actually went to war, he became immediately opposed: "From that point on, I was in the position of making the case that it was a big, big mistake."

Facts First: As fact checkers have repeatedly noted, Biden did not oppose the war in Iraq from the point it started in March 2003. He did begin calling his 2002 vote a "mistake" in 2005, two years into the war, but he was a vocal public supporter of the war in 2003 and 2004. And he made clear in 2002 and 2003, both before and after the war started, that he had known he was voting to authorize a possible war, not only to try to get inspectors into Iraq.

CNN's Facts First team has debunked various versions of Biden's claim that he opposed the war from the moment it started. Read longer articles on that here, here and here.

In a July 2003 speech at the Brookings Institution, Biden said: "Nine months ago, I voted with my colleagues to give the president of the United States of America the authority to use force and I would vote that way again today. It was the right vote then and would be a correct vote today."

During the debate on Tuesday, Biden also offered a confusing timeline of his positions on the war, saying, "I said 13 years ago it was a mistake to give the president the authority to go to war if, in fact, he couldn't get inspectors into Iraq to stop -- what thought to be -- the attempt to get a nuclear weapon. It was a mistake. And I acknowledged that."

Biden on threat to US embassies

Biden said that President Donald Trump "flat-out lied" when he claimed the US killed Iran's top military general because he was targeting four US embassies.

"Quite frankly, I think he's flat-out lied about saying that the reason he went after -- the reason he made the strike was because our embassies were about to be bombed," Biden said.

Facts First: Trump has yet to provide evidence backing up his claim that Iranian Gen. Qasem Soleimani was actively planning new attacks against four US embassies and top administration officials have struggled to defend the President's comments. But there is no way to know if Trump "flat-out lied" without seeing the underlying intelligence, which remains classified.

Trump claimed at an Ohio rally last week that Soleimani "was actively planning new attacks." He later told Fox News, "I believe it probably would've been four embassies," naming Baghdad as one.

Senior administration officials have repeatedly pointed to danger facing US embassies in the Middle East.

Defense Secretary Mark Esper said this past weekend he "didn't see" a specific threat against four embassies in the intelligence.

"What the President said with regard to the four embassies is what I believe as well. He said that he believed that they probably, that they could have been targeting the embassies in the region," Esper added.

Similarly, Trump's national security adviser Robert O'Brien said in an interview on Sunday with ABC's "This Week" that it was unclear whether embassies or US military bases would be targeted, but insisted Trump's claim about four embassies being threatened was "consistent with the intelligence."

The State Department sent a global warning to all US embassies before the strike occurred, a senior State Department official said and the department spokesperson confirmed, but it was not directed at specific embassies and did not warn of an imminent attack.

This is a breaking story and will be updated.