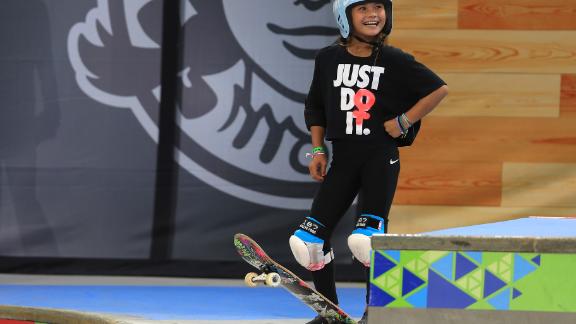 2020 brings a plethora of action and thrills for sports fans, including Euro 2020, the Olympics and the Paralympic Games. Here are some of the athletes to watch this year.

With the Olympic Games in Tokyo and soccer's European Championships lighting up an already packed schedule, 2020 will be a year to remember.

And adding a fresh layer to the sporting landscape will be a cohort of young stars exploding onto the world scene.

Here's a look at 10 young athletes who could have a breakout year in 2020.

READ: The 10 biggest sports stars of the decade

She's only 11, but Sky Brown will become Britain's youngest summer Olympian if she qualifies for Tokyo 2020. And in winning a bronze medal at the Park World Skateboarding Championships in Brazil last September, she has all but guaranteed that.

This summer's Games will be the first Olympics to stage skateboarding events, and few competitors will have more eyes on them than Brown. When the Games open, she will be 12 years 12 days old, which will make her a year and two days younger than record holder Margery Hinton, who competed as a swimmer for Great Britain in 1982.

While there are plenty of young men and women making moves in the skateboarding world, Brown leads the pack as a phenom.

He dominated at junior level and it is inevitable that 17-year old Takeru Kitazono is destined for great things.

In 2019, he won individual gold in both the pommel horse and parallel bars as well as helping Japan win gold in the men's team event at the Junior World Artistic Gymnastics Championships.

The year before he did even better, winning five gold medals at the 2018 Youth Olympics, becoming the first gymnast ever to do so in the process.

There is a buzz in boxing that Caroline Dubois is not just the next Nicola Adams, but is potentially the best female boxer ever.

The Londoner was recently named 2019 BBC Young Sports Personality of the Year, and has already won gold at the 2018 Youth Olympic Games and 2019 EUBC Youth European Boxing Championships.

She may only be 18-years old, but she is expected to compete for medals in Tokyo this summer.

Eduardo Camavinga has not yet broken into the French national team, but that doesn't mean he isn't one of the most exciting young soccer players in Europe.

At just 17, Camavinga has already set the French Ligue 1 alight with his tidy footwork and quick passing for Rennes.

He is already dictating the team's play despite making his senior debut for the club less than a year ago.

China's dominance of women's Olympic diving is unprecedented, winning 24 of the 28 medals available since the 1984 Games in Los Angeles.

Now, the 18-year-old Lin Shan is the next star off China's diver production line.

Following her victory at the 2019 World Aquatics Championships in the mixed team event, she will be expected to deliver in Tokyo.

Like skateboarding, sport climbing will make its Olympic debut in Tokyo. And one of the bright young lights of the sport is 18-year old Sandra Lettner.

The Austrian won gold at the 2018 Summer Youth Olympics, placing highly in all disciplines including first place in the Lead event.

While Lettner may not pick up a medal this summer in Tokyo, she will no doubt have an impact on the competition.

This summer will be Coutya's second Paralympic Games. In Rio, he reached the quarterfinals of both the category B foil and epée events for Great Britain, a disappointing return for someone who had won a silver in the category B foil at the previous year's IWAS Wheelchair Fencing World Championships.

But since then, the 22-year old has gone from strength to strength. At 2017's World Championships, Coutya won gold in both disciplines.

At the 2019 competition, he won gold in epée, and placed second in foil. Despite his relative youth compared with many of his rivals, Coutya is the favorite going into Tokyo.

Anyone who can knock Michael Phelps off his perch is someone to watch. And that's exactly what 19-year old Milák did last year.

Phelps' 200-meter butterfly world record stood for 10 years, but at the 2019 World Aquatics Championships the Hungarian eclipsed the American Olympic great and broke his record by 0.78 seconds on his way to winning gold.

Keep an eye out for him smashing more records this summer in Tokyo.

Going into the 2019 NBA Draft, all eyes were on Zion Williamson, who was tipped by everyone to be selected first overall by the New Orleans Pelicans. Indeed he was, but it is the second overall pick by the Memphis Grizzlies, Ja Morant, who is favorite to win NBA Rookie of the Year this season.

The 20-year old point guard leads all rookies in points per game and assists per game, and is predicted by some to be voted onto the NBA All-Stars team.

In 2019 at the age of just 16, Powell became Great Britain's youngest ever senior World Taekwondo Championships medalist. She said her aim was just to win her first match, but she came away with bantamweight bronze.

GB taekwondo great and double Olympic champion Jade Jones' first medal came when she was 18, but Powell has now eclipsed that record.

She will be another young star to watch in Tokyo this summer.

Dry with a mix of sun and clouds on Fat Tuesday