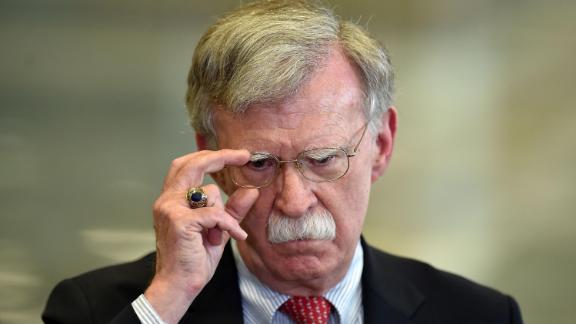 Former National Security Adviser John Bolton announced Monday that "if the Senate issues a subpoena for my testimony, I am prepared to testify" at the impeachment trial of President Donald Trump. This is what Trump should fear most, and it is why Senate Majority Leader Mitch McConnell is so determined to hold a witness-free, substance-less trial. More than any other person, Bolton can blow apart Trump's defenses and change the trajectory of the case for the impeachment.

Bolton's testimony is potentially explosive because he has direct, firsthand knowledge of Trump's reasons for withholding foreign aid to Ukraine. According to prior testimony from former White House adviser Timothy Morrison, Bolton met one-on-one with Trump in August 2019 to try to convince Trump to release nearly $400 million in aid for Ukraine. Morrison said he does not know precisely what happened during that meeting but he testified that, after the meeting ended, Bolton said Trump "was not yet ready to approve the release of the assistance."

And the New York Times reported recently that Bolton -- along with Secretary of State Mike Pompeo, and Secretary of Defense Mark Esper -- met with Trump in the Oval Office in late August 2019. The purpose of the meeting, according to the Times: to convince Trump that releasing the held-back foreign aid to Ukraine was "in interests of the United States." Bolton, Pompeo, and Esper reportedly "tried but failed" in their mission.

Bolton can testify about both of these crucial meetings. And that testimony could be game-changing. Perhaps Trump gave legitimate reasons for not releasing the aid, or perhaps Trump confirmed that his intent was to pressure Ukraine to investigate his political rivals. Either way, we need to know -- whoever it may help or hurt. Only two people on the planet know what happened in one of those meetings: Trump and Bolton, and there's no way we'll hear about it (under oath) from Trump.

It remains unclear why Bolton made his remarks on Monday, yet is staying otherwise silent about his meeting with Trump. He has his book deal, he is back on Twitter, yet he has not spoken publicly about what he knows. While a subpoena would legally compel Bolton to testify, there is nothing at all stopping him from disclosing publicly what he knows.

And it must be asked: If Bolton is so willing to testify if subpoenaed by the Senate, would he be similarly willing to testify in the House? Senate Majority Leader Mitch McConnell is dug in against Democratic efforts to call witnesses to testify at trial, but Democrats control the House. House Democrats curiously refrained from subpoenaing Bolton before, but there is no legal reason why House Democrats could not subpoena him now; although the House has voted on articles of impeachment, it retains the ability to investigate and, if necessary, amend or vote on new Articles. If Bolton is willing to honor a command from the Senate to testify, he should be just as willing to talk in the House.

Bolton's statement ups the pressure on McConnell. Either the impeachment trial will be a real, substantive fact-finding process that will move us towards the truth, or it will be a meaningless, illegitimate political whitewash. McConnell and the Senate are running out of excuses, fast.

And now, your questions:

Jim (Florida): Even though the House has passed articles of impeachment, can they still gather more evidence and use that new evidence at the trial?

Legally, there is nothing to prevent House or Senate Democrats from using evidence discovered after the passage of the articles of impeachment.

Several important new pieces of evidence have emerged recently, primarily through intrepid journalism and reporting. A cache of internal administration emails released by Just Security established that the hold on Ukrainian foreign aid was based on "clear direction from POTUS." Then, there's the August 2019 Oval Office meeting between Trump, Pompeo, Bolton and Esper.

This new evidence strengthens the hand of Congressional Democrats who are pushing for a substantive Senate trial including witnesses and other evidence. The argument, in essence, is: we have enough evidence to impeach, but there still is much more that we do not know -- in large part because the administration has fought to keep it hidden. Thus, it is essential that the Senate trial have a genuine fact-finding function, and not be a mere political rubber stamp.

Ram (Georgia): How quickly can the Supreme Court rule on the Trump tax returns case -- or on any important case relating to impeachment?

The Supreme Court can rule essentially as quickly as it wants, or as the situation demands. The court controls its own docket; it alone decides which cases to take (based on a vote of at least four of the nine justices) and how to prioritize those cases. As an extreme example, in the aftermath of the contested November 2000 presidential election, the court took less than a week to take up and rule on Bush v. Gore. That decision stopped ballot recounts in Florida, effectively ending the election in favor of George W. Bush.

The court already has granted certiorari -- meaning, agreed to take and decide on -- the Trump tax returns cases. So the tax returns ruling could come at any time between now and the end of the court's current term in June 2020. The court has not given any particular indication that it will expedite that ruling because of Trump's impeachment or any other factor.

If an urgent case should arise relating to the impeachment trial -- for example, a dispute over a subpoena -- then the court first will decide if it wants to take the case at all. Given that courts generally steer clear of what they deem "political questions," it likely will try to stay out of impeachment if possible. But if the court does decide that it must or should take an impeachment-related case, it can do so essentially as quickly as it determines the situation demands.

Mary (Maryland): The DOJ opinion says a sitting president should not be indicted because he or she would be unable to complete executive duties. How is impeachment any less a demand on a president's time and attention?

The DOJ opinion counseling against indictment of a sitting president concludes that criminal prosecution is inappropriate because, among other things, it might "unduly interfere in a direct or formal sense with the conduct of the Presidency."

While an impeachment proceeding also certainly commands a president's time and attention, there are important differences in degree. As the DOJ opinion notes, the "stigma" and burden imposed by indictment is more severe than impeachment. And, perhaps most importantly, indictment -- unlike impeachment -- could result in a prison sentence, "which would make it physically impossible for the President to carry out his duties." (Of course, in the event of impeachment, the President would be immediately replaced by the vice president, who would carry on the duties of the office).

Fundamentally, impeachment and indictment are different Constitutional creatures, with different consequences. Indictment is brought by the executive branch (through the Department of Justice) to punish people for criminal wrongdoing; impeachment is brought by the legislative branch to remove individuals from office who have abused or misused power. The argument that impeachment is too much of a distraction to the person being impeached would effectively undo the Constitutional remedy altogether and leave Congress without any recourse to remove corrupt officials from power.

1. Will more new evidence emerge, and will it bolster Democrats' call for witnesses at trial?

2. How long will Speaker Pelosi try to hold articles of impeachment without sending them to the Senate?

3. Will Senators McConnell and Schumer make any progress towards negotiating terms of the impeachment trial?

Hi: 90° Lo: 63°
Feels Like: 79°
More Weather
We continue to monitor a tropical disturbance in the Gulf of Mexico. This will be in heavy rainfall two locations across the southeast over the course of the weekend, and flooding rainfall could be in tow as well. Things are looking better for Father’s Day itself, thankfully.

Smooth mayoral transition is the goal in Columbus

Aberdeen Park and Rec building reopening after over a year

The Houston Board of Aldermen Appoints City's First Police Chief

Pet of the Week - Gary