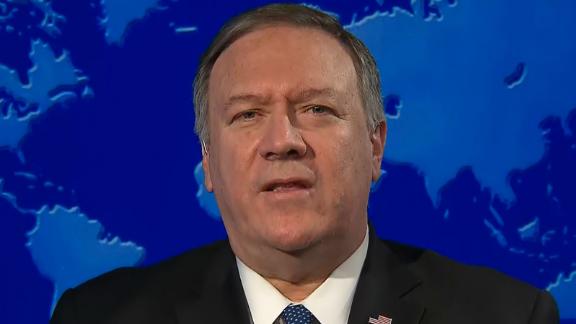 Posted: Jan 3, 2020 9:00 AM
Posted By: By Veronica Stracqualursi and Jennifer Hansler, CNN

US Secretary of State Mike Pompeo said that the airstrike ordered to kill top Iranian commander Qasem Soleimani was to disrupt an "imminent attack" that could have cost American lives in the Middle East region.

"I can't talk too much about the nature of the threats. But the American people should know that the President's decision to remove Soleimani from the battlefield saved American lives," Pompeo said on CNN's "New Day" Friday.

Pompeo said Soleimani was "actively plotting" in the region to "take big action, as he described it, that would have put hundreds of lives at risk." He said that Americans "are safer in the region" after the strike and demise of Soleimani.

He stressed that a US intelligence community assessment had led to the strike.

The Pentagon on Thursday confirmed a strike that killed Soleimani, who as head of the Islamic Revolutionary Guards Corps (IRGC) Quds Force became the architect of Tehran's proxy conflicts in the Middle East. A US defense official told CNN the strike was carried out with a drone.

The strike is a major escalation in regional tensions that have pitted Tehran against Washington and its allies in the Middle East.

On CNN Friday, Pompeo explained that after the death of a US contractor in Iraq on December 27, "we watched the intelligence flow in that talked about Soleimani's travels in the region and the work that he was doing to put Americans further at risk."

"And it was time to take this action so that we could disrupt this plot, deter further aggression from Qasem Soleimani and the Iranian regime, as well as to attempt to de-escalate the situation," he said.

Pompeo on Friday morning spoke with his foreign counterparts in China, the United Kingdom and Germany and "made clear that the United States remains committed to de-escalation," according to statements released by the State Department.

On Friday, the State Department urged US citizens in Iraq to "depart immediately" due to "heightened tensions" in the region.

During his interview with CNN, Pompeo declined to elaborate on the advisory, but noted that they "made the conclusion that a statement that we issued was appropriate, that the timing was right for that."

He did not say whether the State Department will evacuate US personnel in Iraq.

This story has been updated.