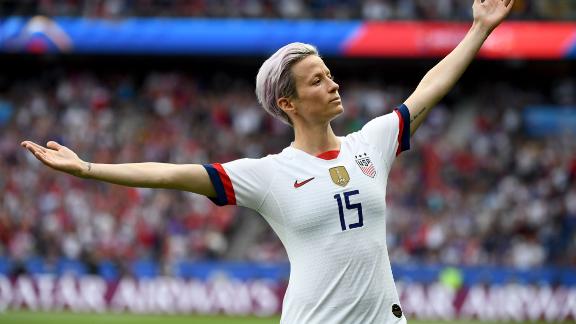 From winning the World Cup to becoming a cultural icon to winning the 2019 Ballon d'Or, US soccer superstar Megan Rapinoe has had a year for the ages.

Barcelona has held on to its crown as the highest paid team in global sport, with Cristiano Ronaldo's Juventus leaping up to join them in the top three.

According to the annual 'Global Sports Salaries Survey' (GSSS) carried out by Sportingintelligence, the average basic first-team pay at Barcelona is $12.2 million per year for the current season.

While this signifies a slight drop from last year, it keeps the Catalan club ahead of its Spanish rival Real Madrid, which boasts a $11.1 million average wage bill.

Arguably the most significant development is that Juventus has jumped from ninth to third in the list.

Thanks to the signing of Ronaldo and other high-profile players, the Italian giant moved from No. 32 in 2017/18 to 10th last year before making the jump to the podium.

The rest of the top 10 is made up of NBA teams, with the Portland Trail Blazers and 2018/19 runners-up Golden State Warriors completing the top five.

"It is not entirely a coincidence that Barcelona, Real Madrid and Juventus, the world's top three wage payers (by average salary) are also among the top five most popular teams in any sport, anywhere, measured by their popularity across Facebook, Instagram and Twitter combined," the GSSS report said.

A key factor in Barcelona retaining top spot was Messi's contract in 2018 which pays him more than $65 million a season, including guaranteed image rights fees and included a €700 million ($775 million) release clause.

The Premier League is on course to break the English top division attendance record that was set in the 1948/49 season, something the report's editor Nick Harris calls "remarkable."