On impeachment, GOP and Democrats are on different planets 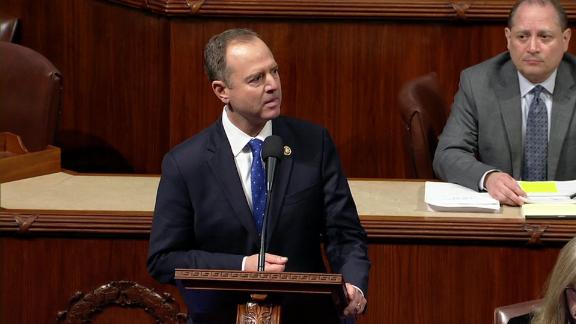 Wednesday was a very long day -- more than 10 hours of dueling debate by Democrats and Republicans, culminating in votes almost entirely along party lines to impeach the President on both of the two articles presented. The proceedings were mostly orderly, frequently repetitive and sometimes quite tedious. But there were some surprises. Alexander Hamilton rivaled Abraham Lincoln for the most quotations, often out of context. Representative Adam Schiff cracked some funny jokes.

On the surface, the Democrats and Republicans were describing two different realities, speaking past each other. The Democrats diagnosed a lawless, corrupt, lying president. The Republicans recounted how the president had tried to lead, and his opponents had undermined him, time and again. One side narrated Trump's villainy; the other side lamented Trump's victimhood.

At a deeper level, they were really talking about the same issue: is Donald Trump fit to serve as president?

The Democrats presented a detailed and documented case of presidential abuses, including pressuring the government of Ukraine to investigate his political rival, withholding congressionally required foreign aid without legitimate cause, and then covering it up. The Democratic speakers used documentary evidence and testimony about these misdeeds to characterize a larger pattern of presidential abuse of power, dishonesty and dereliction of duty.

The Republicans largely avoided the details of the charges against Trump. Their speeches attacked the Democrats for "hating" the president and seeking to impeach him since his first hours in office. Republican speakers tried to discredit what they repeatedly called an "unfair" and secretive impeachment process. They asserted that the Democrats were determined to unseat the president at all costs because they never "accepted his victory."

According to the Republicans, the impeachment charges were purely political -- a conspiracy against a "duly elected" president and his voters.

The rhetorical divide between these two approaches was jarring. The Democratic speakers, by and large, were analytical and detailed. They repeatedly read from the transcript of Trump's infamous July 25 phone call with Ukrainian President Zelensky when he asked for a "favor," the testimony about his demands for "dirt" on Biden and his efforts to prohibit congressional access to documents and witnesses from the Executive Branch.

Democratic speakers emphasized the rule of law, and they spoke in forceful, but measured terms. This was especially true for Representative Adam Schiff, who managed the Democratic speakers for much of day, and kept his cool despite repeated personal attacks by the other side.

The Republicans were neither measured nor analytical. Their arguments roamed back and forth from a Washington Post article that mentioned impeachment on inauguration day to current criticisms of the president from Speaker Nancy Pelosi. Republican words were, for the most part, vague and aggressive. They repeated claims that the Democrats had conducted a "hoax," a "witch hunt," and a "conspiracy."

One speaker, Representative Trent Kelly, called those who testified against Trump in previous hearings "swamp creatures." A number of Republican speakers shouted and gesticulated wildly. Representative Stephen Scalise even ripped a printed page of a House rule to act out his frustration. If the Democrats sought to prosecute the president, the Republicans raged against the entire process.

No one in the House was convinced of anything new—no Republicans broke from their party in either vote, and the only Democrats who did had already announced they would—despite the many hours of presentation. The real audience was outside the chamber.

The Democrats tried to convince moderates and independents of the justice of their cause, and they appealed to history. They wanted to show that they had a strong constitutional case, and that they had pursued all viable alternatives. This was a "solemn day" they repeated time and again.

Republicans spoke to one man above all: Donald Trump. They repeated his abusive and extreme language. They defended him personally, even as they could not excuse his behavior. They paraded their loyalty. The Republican speakers wanted to soften the blow they knew the president would feel when impeached later in the day. They wanted to hold their party together under his leadership, and charge up their core supporters who followed Trump's lead.

That brings us to the final surprise. The votes to impeach Donald Trump were partisan and predictable. But they still mattered enormously because the setting was so grave, and votes on impeachment are so rare.

The Democrats took a stand to limit a president whom they found deeply threatening to American democracy. The Republicans defended him above all else. This was a historic clash over the meaning of our democracy and the appropriate role for the president. In that sense it echoed the only two other impeachment debates in American history.

In the coming months, the US Senate and the American people as a whole will have to decide what kind of governing system we want. We are at a crossroads. The argument for democracy and the rule of law is much stronger, but the case for this president retains powerful emotional resonance.

Hi: 89° Lo: 62°
Feels Like: 88°
More Weather
The relative lack of humidity has been a welcome change from the summertime stuffiness we’ve had lately. That lack of humidity will once again ensure that temperatures get down into the mid 60s for early morning Thursday. While Friday morning will remain comfortable as well, rain chances ratchet up as a tropical system approaches this weekend.

Sunny and hot Thursday afternoon with a bit more humidity