Hit by a bullet, boxer Terence Crawford vowed to change his life 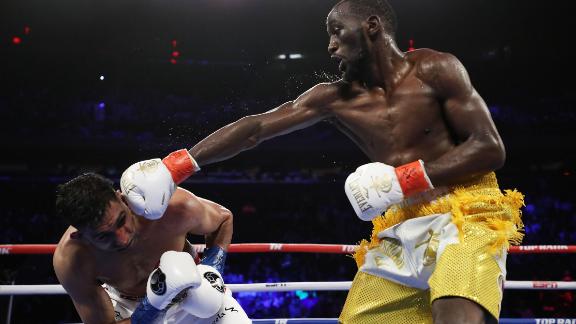 WBO welterweight champion and pound-for-pound great Terence Crawford talks to Patrick Snell about competing at Madison Square Garden in NYC and fighting against the "Mean Machine."

His was a tumultuous childhood with a largely absent father and a "crazy relationship" with his mother, but it was when Terence Crawford got shot in the head he realized he had to turn his life around.

The fledgling professional boxer was sitting in his car in the early hours of the morning after a dice game in his native Omaha, Nebraska when shots rang out and a bullet ripped through the back window and slashed his head below the ear.

The bullet ricocheted off his skull and he was lucky to escape what could have been a fatal injury. But that August night in 2008 was the epiphany when he knew he had to make some changes.

"When I got shot, it changed my life tremendously, and put me on the right path," Crawford told CNN's Patrick Snell.

"And that's when everything started happening there for me with boxing and my family and just everything. My life just took a big turn and started going uphill."

READ: Boxing's 'Clash on the Dunes' overshadowed by 'sportswashing' concerns

Now, Crawford is the WBO welterweight champion and is preparing to defend his belt against two-time Olympian Egidijus Kavaliauskas on December 14 in Madison Square Garden, New York.

"You've got to change your train of thought. And I put all my time and my effort into the sport of boxing. And it's paying off, as you can see."

Crawford's emotional and physical toughness were tested from an early age.

His dad was frequently away with the US Navy, leaving his mother to bring him up in a tough neighbourhood of north Omaha.

Trouble was never far away.

"Man. I've been through a lot as a kid," he says. "But at the same time that upbringing just made me stronger and made me more determined to make it out of where I made it out from and just fight extra hard to not go back."

READ: 'Another fight and I could go blind," says Nicola Adams

His mother Debra was a proponent of the tough love school which added to Crawford's resolve.

"I wouldn't say it was motivating. I would say it was more of proving her wrong," he added. "Me and her got our own different, crazy relationship."

Over the years he fought more than 70 official amateur bouts, losing just 12. After winning three amateur tournaments before the 2008 Olympics, he became the highest-ranked lightweight in the US, but a defeat to another contender meant he just missed out on traveling to Beijing.

He was 21 and four fights into his professional career when the shooting happened. Bleeding profusely, he drove himself to hospital to get patched up.

If his amateur boxing career got off to a flying start, Crawford felt like his professional career was a "roller coaster that was going so slow."

Initially starting out as a lightweight, Crawford has moved up the weight classes as his career has developed and has won multiple world titles at lightweight, light welterweight and welterweight.

READ: Mayweather says he's 'coming out of retirement in 2020'

He won the WBO welterweight title in 2018, a belt he has successfully defended twice. He's ranked by The Ring magazine as the fourth best pound-for-pound boxer in the world.

And from the frustrations in the early professional years, Crawford learned a lot about himself.

"I learned patience," he said. "I'm not a real patient guy, but with me trusting in my coach, my managers and my team, I just trust the process and just continue to stay patient and just follow suit. I'm here now and I'm making the best of it."

While boxing has been his priority from an early age Crawford's reasons for fighting have changed as he's matured.

If he fought for the thrill at the beginning, having children -- he has five -- has "changed his whole life."

"I slowed down, stop hanging around the same people that I was hanging out with that was getting into all the trouble," he explains.

"I completely put all my time and effort into my kids and once I stepped foot in the ring, that's who I fight for.

"And that's who I work extra hard for when I'm tired, to feed my family and to make sure that they are going to be alright after boxing."

Outside of the ring, Crawford has taken a key interest in charity work, particularly in Africa.

His inspiration comes from his former fourth grade teacher, Jamie Nollette, co-founder of Pipeline Worldwide, which does missionary work in Uganda, Rwanda, Kenya and Tanzania.

After seeing some of Nollette's work on Facebook, Crawford expressed an interest in helping her and his visits to Africa have made a big impact on him.

"It just made me feel something that I never felt before," he says. "Seeing those people out there. The way they live, the way they struggle.

"Everything's not all bad over there. But at the same time, it's not in the middle either. You live in luxury or your living in the slums.

"It's not like the United States where you've got the middle class. Either you've got it or you don't. And those people that don't have it, it's bad and it just makes you appreciate all the things and all the luxury things that you have over here in the States like clean water, shoes and whatnot."

Crawford's record stands at 35-0 but he's not taking Kavaliauskas for granted. The Lithuanian says he fears nobody.

"I wouldn't expect him to fear me. I'm just a fighter, just like him. But at the same time, I feel like I'm the better fighter," says Crawford. "And December 14, I'm going to show him why I'm a better fighter."