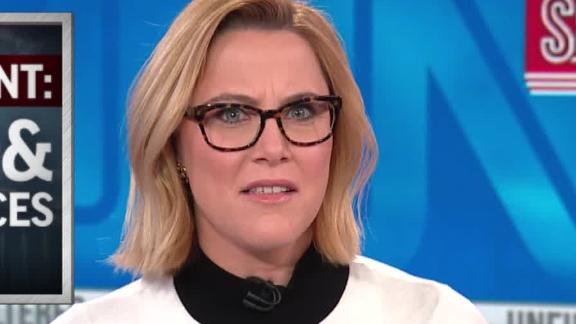 CNN's SE Cupp takes on House Speaker Nancy Pelosi's statement that "politics is not even a consideration" when it comes to impeachment.

In Shakespeare's tragedy, the armored ghost of Hamlet's father stalks the ramparts of the royal castle, with a face cast "more in sorrow than in anger."

Such was the expression of House Speaker Nancy Pelosi as she walked to the podium in front of American flags Thursday to announce that Democrats would draft articles of impeachment against President Donald Trump.

She invoked the Declaration of Independence and complimented her colleagues "for their somber approach" to a process that Pelosi herself had long resisted.

Yet the nation saw another facet of the Speaker's character just hours later when a reporter asked, "Do you hate the President, Madam Speaker?"

She shot back, "I don't hate anybody," citing her Catholic upbringing and warned, "Don't mess with me."

Those words, wrote Pelosi biographer Elaine Povich, "emphasized that she is powerful and cannot be taken lightly when it comes to describing her motives -- particularly where they concern the guideposts of her religion." She added, "when she was a child, Pelosi has said, her mother thought it might be nice if she became a nun. But Pelosi laughingly suggested she would like it better if she could become a priest, since they had all the power. Exactly."

Now she does have all the power -- at least in writing the next chapter of the impeachment story.

"Support for removing Trump from office has increased in the last two months, thanks to Pelosi's methodical staging of tightly-managed public hearings designed to make a public, easy-to-understand case that Trump has abused power, obstructed Congress and violated his oath of office," noted Errol Louis.

The speaker's approach, he wrote, is driven by a shrewd sense of politics: "It's safe to say that Pelosi does not get out of bed in the morning without considering the politics of putting on her slippers."

Julian Zelizer observed that "with a firm hand and clear vision, Speaker Pelosi has done something that no one else seemed to be able to accomplish. She has seized back the public square from the Trump White House."

But in Scott Jennings' view, the impeachment juggernaut is no surprise to Trump's loyalists; it only draws them closer to him. "It's true that Pelosi had no choice, although it's not because of the Constitution," he wrote. "What have Democrats wanted more than anything since Trump's election?...The answer is obvious: to undo the 2016 election by any means necessary. It's a political itch that had to be scratched, and Pelosi could hold off her tormented partisans no longer." Having liberal Democrats, law professors and world leaders scorning and laughing at Trump, is just what he courted when he was elected to disrupt the elite, said Jennings.

Is there enough evidence to impeach Trump? We asked two expert lawyers, Michael Zeldin and Robert Ray, to trade views.

If Trump's trip to London was scripted to divert attention away from the President's worries back home, it was a complete failure. Even before he landed in London, UK Prime Minister Boris Johnson, normally a Trump ally but facing a general election Thursday, "made it clear he would rather keep the deeply unpopular Trump at arm's length," wrote Frida Ghitis. "Trump has become politically radioactive."

At the event marking NATO's 70th anniversary, Trump "clashed with French President Emmanuel Macron and appeared to be mocked by Canada's Justin Trudeau and other NATO leaders in an embarrassing video," wrote Aaron David Miller. The upshot: Trump canceled his closing press conference and headed home.

If Trump needed cheering up after the trip, he could take heart in a poll that found that 53% of Republicans think he's a better president than the first Republican to win that office, Abraham Lincoln.

The finding is evidence of how firmly today's Republicans identify with Trump, but not a serious historical comparison. "Though Lincoln and Trump are both nominally Republicans, the party of 1860 and the party of 2019 have nothing in common but the name," wrote Fred Kaplan. "Lincoln was pro-immigration; he favored a balanced budget; he abhorred deal-making other than as constructive compromise; he believed that it was the job of the president to implement, not to make or to disregard, the law."

Sen. Kamala Harris dropped out of the Democratic presidential contest this week, spurring discussion of how a once promising contender failed to make it even to the first round of the primary voting in 2020.

Why has Mayor Pete Buttigieg gained traction in the party's center lane while Harris, with more substantial experience in public office, couldn't, asked Rafia Zakaria. "There are many reasons that Kamala Harris could not sustain her presidential run but one central obstacle is that she made her presidential bid in a country that is unused to seeing women who look like her in power -- let alone in the highest political office," Zakaria wrote.

Harris said she lacked the "financial resources" to continue the campaign. That wasn't all of it, observed George Skelton in the Los Angeles Times: "Harris' lack of money was just a symptom of her failed presidential bid, not the root cause of its demise ... the plunging poll numbers resulted from her inability to connect with voters. And she couldn't connect with voters because of the core weakness in her candidacy: a lack of cohesive strategy and clear personal convictions. There was no evidence of the political soul needed to guide her toward public policy she felt strongly about."

Meanwhile the frontrunner in the race, former Vice President Joe Biden, was traveling by bus on his "No Malarkey" tour of Iowa. At a campaign event in New Hampton, he called a resident who questioned his son's work for a Ukrainian company a "damn liar." Then he challenged him to a push-up contest. Let's face it, wrote LZ Granderson, Biden's statements have always been problematic. "For as much as Biden...touts himself as the man who can restore dignity to the White House, the truth is he is a behavioral and rhetorical wild card as well."

CNN Opinion's Fractured States of America series is concluding with a deep look at solutions to the political divide. Yaffa Fredrick described two immigrants living in North Carolina who approach issues from opposite ends of the political spectrum. "Rremida Shkoza, a progressive Democrat, did not understand how another immigrant could be a Republican," she wrote. "Then she met Julia Song, a Brazilian immigrant to the United States, at ... an intimate event designed to bring people of opposing political backgrounds together to discuss some of the most controversial issues of the day.

"Song was a proud Trump supporter, who believed that several of the President's immigration policies were necessary first steps in reforming a broken and backlogged immigration system...Shkoza was quite moved by Song's experience -- and while neither she nor Song switched political sides of the debate, they acknowledged the many layers of complexity to it. Shkoza also believed she had found a pathway forward."

Stepping outside of our blue and red bubbles is a key first step to healing the nation, Fredrick noted. Here are some pieces outlining other steps to take:

Garry Kasparov, who became the youngest world chess champion in 1985 and is now a pro-democracy activist, recalled the country of his birth, the Soviet Union.

"Reality was whatever the Party put out on the nightly news, or in the official newspapers, Pravda, which means 'Truth', and Izvestia, which means 'News.' It was increasingly obvious back then, even to communist true believers, that what we were being told didn't match the world we saw around us. As the joke went, 'there is no news in the truth and no truth in the news.'"

An exile now in the United States, Kasparov hears uncomfortable echoes today of the Soviet attitude to truth: "President Donald Trump and his Republican defenders in Congress have followed his lead in declaring war on observed reality.

"Critical reports are 'fake news,' journalists reporting the facts are 'enemies of the people,' a phrase of Vladimir Lenin's, debunked conspiracy theories are repeated, and public servants testifying under oath about documented events are dismissed as Never Trumpers. Unable to change the facts, Trump and his supporters instead try to shift the debate into an alternate universe where the truth is whatever they say it is today."

There is only one truth and there cannot be separate Republican and Democratic forms of reality, Kasparov wrote. "Trump is finally facing the music, and that must begin with everyone facing the facts."

Roxanne Jones: Gabrielle Union had my back

Elizabeth Warren: World AIDS Day reminds us of this

Joe Lockhart: GOP throwing sand in the gears of impeachment

David A. Andelman: France shuts down as Macron touches third rail of politics

As Noah Berlatsky wrote, "the first superhero ever created" may still be the most famous. "But he isn't thought of as an especially relevant or timely character these days. He can outrun a speeding bullet, turn back time and come back from the dead. The one thing he can't do, apparently, is anchor a hit film in the contemporary superhero era."

Berlatsky has a plan for that.

The superhero should return to his roots. "Superman as initially conceived in the 1930s," he wrote, "was successful in part because he spoke so directly to the social tensions and problems of his day -- tensions and problems that aren't so different from our own: gender inequality, corporate corruption and greed, racism and vulnerability to state power."

Hang in there, Man of Steel.