FIFA and UEFA 'may as well have stood in stands' with racists, says ex-England star 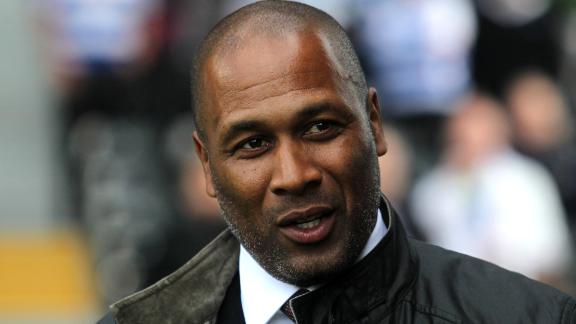 Many thought the racist abuse suffered by England's footballers in Bulgaria might be a watershed moment for the sport.

That the monkey chants and Nazi salutes they endured during that Euro 2020 qualifier in October were surely enough to warrant severe sanctions.

While some had called for Bulgaria's expulsion from Euro 2020, the Bulgarian Football Union (BFU) was handed a one-match stadium ban and a $83,000 fine by UEFA, European football's governing body.

"For me, UEFA, FIFA and all the people involved in this may as well have stood in the stands with those people that were making the Nazi chants, or the Nazi salutes and the monkey chants," Les Ferdinand, a former England international, told CNN.

"[They] may as well have stood in the stands with them, for the punishment that's handed out to these people. We had Tyrone Mings, Raheem Sterling, Marcus Rashford who are playing for their country, representing their country and they've probably got very, very proud parents," added Ferdinand.

"These parents would be as proud as any other parent, wanting to go and see their son play. What you're basically saying by the punishment that's been handed out by UEFA to Bulgaria is that the families of black or BAME representatives on the football pitch do not matter, because why should they be in the stand and have to listen to that and nothing is done about it?"

READ: Georginio Wijnaldum is ready to walk off pitch if subjected to racist abuse

UEFA did not immediately respond when contacted by CNN. In the aftermath of the Bulgaria match, UEFA President Aleksander Ceferin blamed the "rise of nationalism" across the continent for the "unacceptable behavior" of some football fans who continue to racially abuse players.

"Believe me, UEFA is committed to doing everything it can to eliminate this disease from football. We cannot afford to be content with this; we must always strive to strengthen our resolve," he said.

FIFA, world football's governing body, said its position on racism is "unequivocal" and that "discrimination of any kind has no place in football."

"FIFA urges all member associations, leagues, clubs and disciplinary bodies to adopt similar procedures as FIFA, as well as a zero-tolerance approach to incidents of racism in football, and to apply harsh sanctions for any such kind of behavior," a spokeperson told CNN.

Currently, less than 1% of senior roles involved in the running of football clubs in the UK are held by an individual of a black or minority ethnic background.

Ferdinand is one of that small number, holding the position of Director of Football at English second tier club Queens Park Rangers.

Likewise, UEFA's Control, Ethics and Disciplinary Body -- the board that decides on the punishments handed out for incidents of racist abuse -- is made up of only white members.

Ferdinand says the lack of diversity at the very top of the sport is one of the reasons why racists in the stands continue to act with impunity.

READ: How the scourge of racism continues to tarnish English football

"They can't [make these decisions] and that's why the punishment is what it is, because they have no idea what being racially abused feels like. So they hand out punishments that are just irrelevant.

"For me, the people in power can solve this problem if they want to but they don't really want to solve it because it doesn't affect them."

"I agree that sanctions will have to be harsher and harsher. And I'm sure we will. I cannot tell you more but we will rethink all the disciplinary regulation and diversity in the disciplinarian gravity."

One leading British football writer described UEFA's punishment of Bulgaria as "appeasement, an insult to people of color and to decency."

Ferdinand agrees, pointing out that the argument that expulsion also punishes the silent, well-behaved majority didn't apply when UEFA took a tough stance on hooliganism after the Heysel Stadium disaster back in the 1980s.

Before the 1985 European Cup final between Liverpool and Juventus, some fans of the Merseyside club -- 14 of which were found guilty of manslaughter -- caused the deaths of 39 people in a crush.

UEFA banned all English clubs from European competition indefinitely as a result of the tragedy, eventually lifting the ban in 1990, though Liverpool was handed an extra year's ban.

"After the Heysel disaster, we were kicked out of Europe for five years," Ferdinand says. "Now, I know for a fact it wasn't a majority of England supporters that were going and causing problems. It was a minority.

"But the minority got the majority punished and since then -- unfortunately, this hooliganism thing has started to raise it's ugly head again -- we're not seeing anywhere near the problems we used to see before.

"English supporters, people that support their clubs up and down the country, want to see their clubs playing in the Champions League so they don't have the violence that was going on many years ago. So sometimes, you have to punish the majority because of the minority."

But it's not just the way UEFA has handled the fallout from England's game with Bulgaria, that concerns Ferdinand.

Earlier this year, QPR's Under-18 side walked off the pitch during a match against an Andalusian team after a number of alleged racist incidents.

Following the game's abandonment, UEFA insisted the matter fell under the jurisdiction of FIFA, which initially said it would investigate.

However, after taking seven weeks to respond to QPR's complaint, FIFA in turn insisted that it was a matter for UEFA to deal with.

"UEFA say: 'It's not our problem ... .' So no one wants to take responsibility for it, no one wants to say: 'Well look, this is happening and as a governing body, we need to do something about it. We need to stamp authority.'

"What they're doing, they're trying to pass the parcel so it's got nothing to do with them."

FIFA said that according to its disciplinary code, "confederations have jurisdiction on disciplinary matters related to friendly matches and competitions between representative teams or clubs belonging to the same confederation."

UEFA did not immediately respond to CNN's request for comment, though previously said it would investigate the incident if the Spanish and Andalusian football authorities conclude their investigations without taking any action.

In October, the Royal Federation of Andalucia told CNN in a statement that QPR was responsible for the delay in any action being taken.

For Ferdinand, it's symptomatic of the bureaucratic response of football authorities in stamping out racist abuse.

The 52-year-old was also critical of the English Football Association (FA), which he says hasn't done enough to support his club and its young players.

"When this happened and I sat down with [QPR Chief Executive] Lee Hoos -- who's got firmly behind this -- and we spoke about it, I told them this was gonna be the case.

"He's pressing on with this and he's gonna take it as far as he possibly can. I said: 'You're gonna go through a process of people not wanting to do anything about this, we're gonna pay lip service.'

"Even our FA are gonna pay lip service to this and say: 'Yeah, we're right behind you' but nothing is gonna be done about it. And he didn't want to believe it, but now he does."

In response, an FA spokesperson told CNN: "The FA does not have jurisdiction over international pre-season fixtures involving English clubs.

"However, The FA Chairman, Greg Clarke, personally wrote to both UEFA and the Spanish Football Association to express his extreme condemnation and disappointment at the alleged discriminatory abuse suffered by Queens Park Rangers' Under-18s players in Andalusia and asked to be kept informed of the necessary investigation.

"The FA takes matters of discrimination extremely seriously and is determined to reduce all forms at every level of the game, from grassroots through to the elite."

While the football authorities decide who should take responsibility for this case, Ferdinand points out that it shouldn't be forgotten that at the center of this storm are the young men who suffered the alleged racist abuse.

He says he is full of admiration for how his young players have handled what is a serious and potentially scarring incident, thanks in part to the support provided ahead of the tour in Spain by Kick It Out, a UK organization that works to tackle discrimination in professional and grassroots football.

"The kids are okay, they're getting on with it," says Ferdinand. "Obviously every now and then there's something in the press that brings it back but I think from a player perspective they've just got on with it.

"They understand what the situation was, what they were involved in and Troy Townsend [head of development] came down with Kick It Out and explained that going to the region, these type of problems could surface.

"They did a workshop with all the players on how to cope with it, how to deal with it before they actually went. So they went and encountered what they encountered and I think they dealt with it in a very, very professional way."

Ferdinand began his career as a young footballer in England's amateur leagues in the early 1980s, before being signed by QPR in the top tier of English football.

Racist abuse was a common feature for black footballers in England then but Ferdinand is exasperated that players are still forced to confront it in 2019.

"I played non-league football before I made it as a professional footballer and that [racism] was probably a regular occurrence," he says. "Back then, things were said, jokes were made that people thought were acceptable.

"I let people know it wasn't acceptable in whatever way I needed to, but it was part and parcel of playing football back then. We're talking about the late '70s, early '80s, those sorts of times and I went through that sort of thing as a player but I loved playing football, I carried on playing.

Racism, of course, is not only confined to football -- sport is a microcosm of society -- as Ferdinand knows too well.

Close to QPR's west London stadium is the Grenfell Estate, near where he grew up. Two years ago, people in the UK awoke to the sight of a 24-storey apartment block -- Grenfell Tower -- violently ablaze.

QPR has worked closely with the families of the victims and the surrounding area since the tragedy and Ferdinand believes these kinds of attitudes from those at the top -- whether it be politics or football -- are reflected in the decisions they make.

"Every now and again there's a slip up -- and that was one," Ferdinand says. "Because you know what their real thoughts are, but when people are well-educated and politically correct, they say the right things most of the time when they're in public.

"But behind the scenes ... well, we can see by the actions that are taken.

"What I'm saying is, don't just talk about football as where the problem is -- it ain't football. It's society. It's the wider society that we live in, where people are being politically correct by what they say, but their actions are actually very, very different."