Pelosi: 'I don't think we're headed for a shutdown' 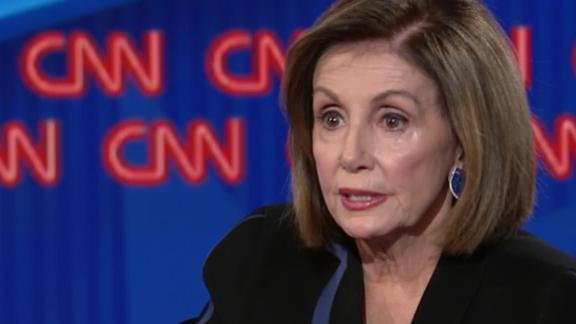 House Speaker Nancy Pelosi dismisses the threat of a looming government shutdown later this month, positing that "I don't think anybody wants that."

House Speaker Nancy Pelosi on Thursday dismissed the threat of a looming government shutdown later this month, positing that -- even in a divided Washington -- "I don't think anybody wants that."

"I don't think we're headed for a shutdown. I don't think anybody wants that," Pelosi told CNN's Jake Tapper during a CNN townhall. "I think the President and the Republicans learned in the last shutdown that it just wasn't -- there was not upside to it even though the President said, 'I'll take pride in shutting down the government.' "

"I don't think he's going to take pride in shutting it down again," she said.

Pelosi's comments come just 15 days before government funds expire on December 20, with the final sprint to avoid a shutdown overlapping with the House's high-profile impeachment inquiry of President Donald Trump. Earlier Thursday, Pelosi announced the House was proceeding with articles of impeachment, a historic step that is likely to make Trump the third President in US history to be impeached.

"Today, I am asking our chairmen to proceed with articles of impeachment," Pelosi said in a brief address outside her office.

"The President leaves us no choice but to act because he is trying to corrupt once again the election for his own benefit."

Still, Pelosi asserted Thursday night "we're on a good path" to avoid a shutdown and said Congress could produce a continuing resolution to keep the government funded through Christmas if longer-term spending discussions fall apart.

"But I hope we don't have to do that," she said. "But I don't think anybody wants to see a shutdown."

Trump previously presided over a record 35-day partial government shutdown before conceding to mounting pressure to reopen the government in January without funding for his campaign promise of building a wall on the US southern border.

Democrats maintained throughout the shutdown fight that they support border security measures, but not new funding for a border wall.

When the government closes, an average of about $275 million in compensation to federal employees is delayed per day, according to an analysis of agency staffing and pay data by CNN.