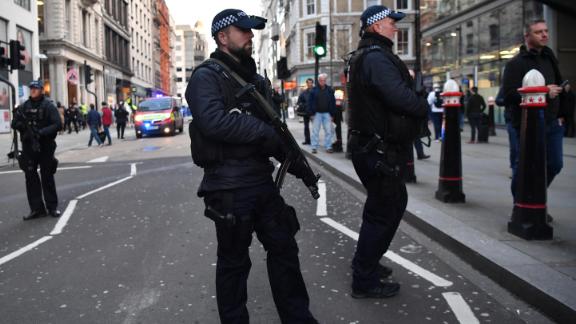 At least two people were killed in a stabbing attack on London Bridge. Police say that the suspect, who was shot dead, had a hoax explosive device strapped to him.

The terrorist attack in London on Friday -- in which two people were killed by what appears to be a lone suspect, according to British authorities -- is bound to raise questions about the UK Home Office's decision earlier this month to lower the terrorism threat level from "severe" to "substantial," the lowest point since August 2014.

The Joint Terrorism Analysis Centre, which works closely with UK intelligence services, made the recommendation to lower the threat based on an evaluation of available intelligence along with an analysis of terrorist capabilities and intentions, according to the Home Office.

Surely the destruction of ISIS's physical caliphate in Syria and Iraq, the last vestiges of which were expunged in March, played a role in the assessment.

Indeed ISIS has seen a dramatic decline in the recruitment of "foreign fighters." In 2017, the US military said as many as 40,000 people from 120 countries including the UK had joined ISIS in Iraq and Syria.

Today, that number has slowed to a trickle. Very few want to join the losing team.

But even when the UK Home Office announced it was lowering the terrorism threat level, it issued a warning that there were "around 800 live" counterterrorism investigations across the nation and that 24 terrorist plots had been thwarted since March 2017.

So far, the British police has declared Friday's attack on London Bridge "a terrorist incident." The suspect, who wore a fake suicide vest, stabbed several victims on London Bridge before he was killed by police. Authorities have not ascribed a specific motivation to the suspect. But the incident bears a close resemblance to an attack in 2017. ISIS-inspired terrorists wearing fake suicide vests plowed a van into pedestrians on London Bridge before launching a knife attack at the neighboring Borough Market, killing eight people before they were shot dead by police.

On Friday evening, UK Prime Minister Boris Johnson said the incident has been contained "to the best of our knowledge," suggesting that the terrorist involved was not part of a larger group.

Friday's attack highlights the persistent threat of "lone actor" terrorists who are often radicalized online by ISIS or other militant groups. But their capabilities for lethal action generally do not match those of trained terrorists, like the ones behind the 2015 attacks in Paris, who killed 130 people after training in Syria.

ISIS' territorial defeat earlier this year marks a significant victory given its role as a training ground for terrorists to carry out attacks in the West. What remains are "lone actors" who are often radicalized online. Given what we saw in London on Friday, they too can be lethal -- and in many ways, much harder to detect.