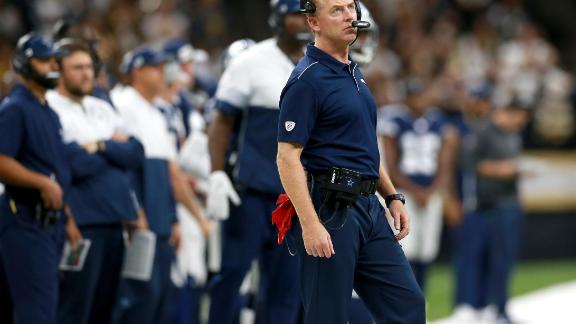 Dallas Cowboys owner Jerry Jones, off the back of a disappointing loss to the New England Patriots, gives his backing to Jason Garrett.

Since 1966, NFL fans have become accustomed to watching the Dallas Cowboys play on Thanksgiving.

Along with the Detroit Lions, "America's Team" are one of the two teams who play on the national holiday every year.

And in 2019, following an inconsistent season, Cowboys head coach Jason Garrett might be more thankful than most to be involved in their game against the Buffalo Bills.

But long-time owner Jerry Jones, off the back of a disappointing loss to the New England Patriots and with speculation swirling about the future of the coaching staff, remains firmly behind Garrett.

"The guy who has the final say on who's coaching this team at any position, is my decision," Jones told CNN Sport's Coy Wire.

"And so, if I am critiquing any part of this football team, it's a critique of me as well. No, we're not satisfied with having lost that game. No one ever is.

"But we want to be at our very best. As far as the coaches themselves, I stand with anybody and defy. I am a Jason Garrett man. I'm known for that."

Garrett has been head coach of the Cowboys since 2011. Garrett was the Cowboys' backup quarterback for their two Superbowl wins in 1993 and 1996.

The Cowboys' 6-5 record has them sitting atop the AFC East and in prime position for a playoff spot.

But ahead of Thursday's showdown against the 8-3 Bills, the 77-year-old Jones says there is always room for improvement.

"I want to win the football games, just as he and everybody else does. So, anything that I am frustrated about, should be interpreted as a way to get a little better edge and maybe do something about it."

While the Cowboys are looking to improve, one team that is seemingly playing at the peak of their powers is the Baltimore Ravens.

The East Coast side have won their last seven games, steamrollering opponents and are quarterbacked by the MVP-frontrunner Lamar Jackson.

And for veteran safety Earl Thomas, it is now a case of who they will be facing in the Superbowl rather than if they will make it.

"You think the 49ers are going to the Super Bowl? It could be, let's see," Thomas told reporters.

"We'll just go out there and try to play the best football we can possibly do. And when the Super Bowl comes, whoever we play, they're going to be in trouble."

And when Jones watches Jackson, he sees a player that has "worked hard."

"We had a bird-seye view of him about a year ago and he wasn't this good," Jones said.

"He has worked and his coaches have worked and it's just a shining example that God can give you all the gifts but if you don't the led to it, if you don't put the action to it, and the study and the hard work to it, it never comes out.

"He's a product of hard work. It looks so natural and easy but that's when you've been working the hardest. I really admire how far he's come in the past year."