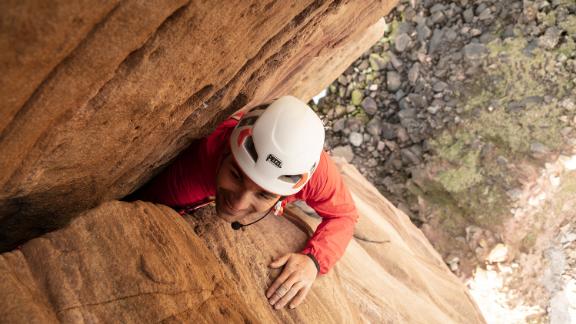 Climbing the 449-foot high Old Man of Hoy sea stack, in the Orkney archipelago off the north coast of Scotland is difficult enough, so imagine trying to do it with less than 1% of your vision.

Climbing a huge rock tower above crashing waves off a remote Scottish island is difficult enough, but imagine trying to do it if you're blind.

Briton Jesse Dufton has just 1% of his vision but he became the first blind person to lead a climb up the formidable Old Man of Hoy sea stack in the Orkney Islands.

Legendary mountaineer Chris Bonington was the first to scale the column in 1966, and a number of blind climbers have since followed sighted partners on the famous route.

Although many people might find an ascent like this daunting even in normal circumstances, Dufton finds the tactile nature of climbing "meditative."

"When you're climbing, especially when you're leading, you can't be thinking about anything else," he told CNN.

"You're not worrying about what was going on in the office on Friday or whatever. You just don't have the mental bandwidth to do that.

"You're worrying about how long it was since you last placed your last piece of gear and whether or not you're going to be able to stick this next move."

His scaling of the Old Man of Hoy has since been celebrated in the documentary "Climbing Blind," which is touring the UK as part of the Brit Rock Film Tour.

Dufton suffers from rod-cone dystrophy -- a genetic condition leading to damage of the light sensitive area in the eyes -- as well as astigmatism and cataracts.

He was born with 20% of his central vision, but his sight deteriorated from an early age. Now aged 33, light perception is about all he has left.

"I can't distinguish anything anymore. I can tell where lights are. I'm holding my hand a foot in front of my face now, and I'm wiggling my fingers and I can't see it."

Dufton's father introduced him to climbing when he was two years old. Despite his worsening vision, he continued to play rugby and jujitsu until he was 16.

Now climbing is his sole sporting focus. He's traveled all around the world, from a month-long self-organized expedition to Greenland to climbing in Chamonix, France and sport climbing in Greece and Spain.

In 2017, he was selected for Great Britain's Paraclimbing team -- he came fourth at the World Championships in July, something he'd like to "improve" upon.

Dufton admits that while the ascents in Greenland were slightly easier than the Old Man of Hoy, the "difficulty comes in the remoteness."

A patent engineer for a technology company by day, Dufton shot to prominence with his ascent of the Orkney Islands cliff. The complexity of the climb was one of the main reasons he chose the sea stack.

"I didn't particularly say, 'I want to be the first to do that.' This is quite arrogant, basically I'm the first blind person to do almost all the climbs," he said. "Above a certain difficulty, I don't think there's anyone else who's leading the stuff that I'm leading.

"They're in cool places and you've got some extra logistical challenges, in that when you get to the top you can't just walk off.

"Normally when you go climbing, there's an easy way down, you can walk around the side of the cliff. Obviously, that's not the case for the sea stack.

"And also, there's an added appeal that there's no other way to get to the top. At a crag like Stanage [in the UK's Peak District], you could just walk round and there's all the punters walking along the track at the top. Whereas at the sea stack you can't get there unless you climb."

For climbers, the eyes are one of their most important tools, allowing them to decide exactly where to place their hands and feet.

To get around that issue, Dufton is guided by Thompson, through voice commands given through a headset.

The pair have been climbing together since 2004 and through years of practice, they have honed the skill, logging more than 1,300 routes together.

Due to the often complex nature of climbing routes, there are points during a climb where Thompson can lose sight of Dufton.

In these moments, Dufton must fend for himself, and over the years, has developed a "sixth sense" for finding his way.

"It happens reasonably frequently that she can't see either the good bit or around the corner," Dufton explains.

"And I don't really have a particularly good explanation of how I do it. Just years of practice, I think. I have a few tactile clues if I've gone off route.

"I'm not getting any directions, so I've just got to feel around with my hands and my feet to try and find the holes.

"I also remember the route description. (Before the climb) she'll describe what's written in the book to me. It'll be something like: 'Traverse along the ledge for three meters and then climb a cleft to a small overhand pullover rightwards.' And I'll remember that, and I'll be looking for those features."

High winds meant they couldn't get started until 3 p.m., and after a mammoth climb, they reached the summit at 10.10 p.m.

"Getting to the top is only halfway, you've still got to get back down again. So I think when I topped out, mostly it was relief that I've done it cleanly," he said.

"There was satisfaction, but you couldn't properly relax yet, because it was about to get dark -- which doesn't make that much difference to me -- but it still makes stuff harder."

Training at a variety of different locations, Dufton has learned to overcome wide-ranging challenges. But while he's improved physically, it is in his head where the real struggles are taking place given he can't see what he's doing. Dufton believes "keeping the fear under control" is key.

"I do get scared, but I think I'm quite good at keeping it bottled up and not letting it get to you," he explained.

"Often when you're climbing, such as on a lead and the gear is below you, you'll start getting nervous because you know what's going to happen if you fall off and you know that that last piece of gear might not stay there.

"Then you get what climbers call 'disco leg' or 'Elvis leg' where you start to shake because you're nervous. Trying to keep that under control and stay relaxed, I think is probably the mental battle that I'm going through."

Ice climbing in Norway and climbing a selection of the sandstone buttes in Monument Valley, Utah are next on Dufton's bucket list.

He also hopes his success will highlight to parents that disabled children don't need to be mollycoddled.

"I think it's a message to let the parents of other disabled kids (know) that you don't necessarily need to wrap them up in cotton wool," Dufton said. "They need to be set challenges and you need to accept that they can take risks.

"And if they don't, that's going to be more detrimental to them in the long term. Everyone's got to try something."