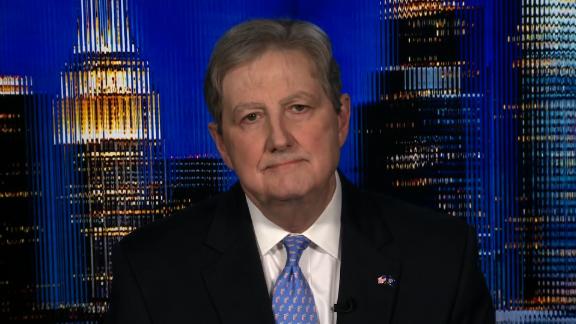 Sen. John Kennedy (R-LA) backtracked on claims he made on Fox News that no one can be sure it was only Russia who tried to interfere in the 2016 presidential election, saying he misunderstood the question and that he sees no evidence that Ukraine hacked the DNC server.

Sen. John Kennedy is the exception that proves the rule. Kennedy backed away from the absurd Trumpworld fantasy that has claimed the minds of so many of his Republican colleagues. Now, as he told CNN's Chris Cuomo, the senator from Louisiana accepts the truth that it was Russia that interfered in America's 2016 election.

"I was wrong," said Kennedy. "The only evidence I have, and I think it's overwhelming, is that it was Russia who tried to hack the DNC ... I've seen no indication that Ukraine tried to do it."

The reversal may indicate that Kennedy has a moral sensibility or is smart enough to see that his previous statement to Fox's Chris Wallace -- that no one knows who did the crime -- made him look ridiculous. Then again, his first claim was sure to reach (and please) the President's core supporters. Fox News viewers who nodded along aren't likely to learn of his new position, stated on CNN. Thus, the senator can have it both ways.

Kennedy's Russia-Ukraine dance reflects the larger closing of Republican minds to the damage wreaked by the President's campaign to destroy fact-based politics and public morality. One by one, many formerly respectable politicians have joined a cult devoted to Trump's conspiracy theories and self-serving claims.

The spectacle has become more pronounced of late, with the most craven example coming from former Texas governor and current secretary of energy Rick Perry, who called Trump "the chosen one" and explained that he's part of "God's plan for the people who rule and judge over us on this planet in our government."

Perry once knew better when it came to the nature of Donald Trump. "He offers a barking carnival act that can be best described as Trumpism: a toxic mix of demagoguery, mean-spiritedness and nonsense that will lead the Republican Party to perdition if pursued," said Perry in 2015 as he called for Trump's defeat in the 2016 primaries.

What changed between 2015 and today?

In Perry can we see a man who apparently recognized the grip Trump had on the GOP base, joined the cabinet and became ever-more co-opted? By the spring of 2019, according to testimony given in the impeachment inquiry hearings, he became a witting or unwitting part of the President's scheme to force Ukraine to gin-up an investigation of Democratic presidential rival Joe Biden in order to receive desperately needed aid in its war with Russia. Perry has denied being part of any conversation in which the Bidens came up.

As the world surely knows by now, Perry's experience reflects a pattern for those who dare to enter Trump's orbit. As insiders, they witness the power of Trump's ability to demonize those who stand against him, rally voters to his side and deflect efforts to get at the truth.

Only those with the strongest moral and intellectual code -- think former Secretary of Defense James Mattis -- can avoid being compromised and, as Mattis showed when he resigned, no one can maintain the struggle indefinitely.

Sadly, few in the top ranks of the administration or among Republicans on Capitol Hill show Mattis-style strength. The worst offender is Sen. Lindsey Graham of South Carolina, who claimed a close friendship with John McCain, deceased war hero and senator, but has now been rebuked by McCain's daughter for failing to stand against the President. Once capable of criticizing Trump as "religious bigot," Graham now functions as an abject apologist and craven enabler.

Most recently, he has given Trump what he sought from Ukrainian President Volodymyr Zelensky by opening a Senate investigation into the Bidens. His abuse of power, as chairman of the Senate Judiciary Committee, seeks to advance Trump's lie-based smear of a political opponent. "That's the way it works in politics," he said, defending the Biden investigation.

Others in the camp of the craven now include Rep. Will Hurd of Texas who, though he is resigning and once stood as a critic of the White House, listened to extensive testimony regarding Trump's alleged bribery and extortion efforts and announced, "I have not heard evidence proving the President committed bribery or extortion."

Others who seem unable to hear, or reason, include former United Nations ambassador Nikki Haley, who now agrees that Trump is heaven sent, and Sen. Rand Paul, who went from Trump critic to bromantic partner. The president has said, "Rand Paul is a very special guy as far as I'm concerned. He's never let me down."

Trump's statement about Paul was both a dominance display and an endorsement the senator can present to voters who follow Trump's lead. By seeking the President's praise, Paul complied with the dynamic of capitulation that seems to overwhelm Republicans in Washington.

Too weak to resist, they see survival in joining the cult that degrades the nation a little bit more every day. What they don't seem to realize is that there will be an America and a Republican Party after Trump, but the damage they are doing now will make it much harder for both to recover.

Students deal with stress and anxiety through fun activities