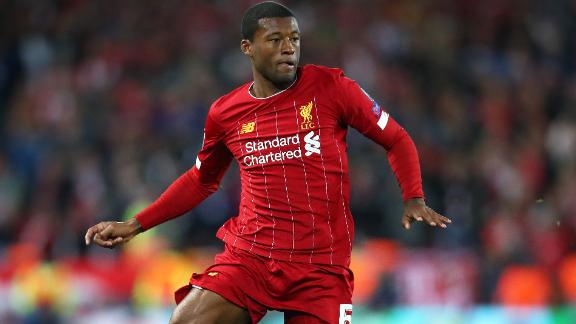 Liverpool and Holland star Georginio Wijnaldum tells CNN he will walk off the field if he suffers racist abuse, even if it means leaving the pitch during a Champions League or Euro final.

Liverpool and Holland star Georginio Wijnaldum says he would walk off the pitch if he experienced racist abuse, even if it was in the Champions League or the Euro 2020 final.

The 29-year-old says he has been deeply affected by the number of racist incidents that have marred European football in recent months and passionately believes that leaving the field of play is the best way for players to combat such discrimination.

"Why should I play in that case?" he told CNN Sport when asked whether he would play on if subjected to racist chants from supporters.

"I think everyone should do it [walk off]. I think that's the way you support another person, because why should you go on? If you play on, it will never stop."

'They don't feel the pain'

Wijnaldum won the Champions League with Liverpool in June and has been a key part of the Dutch team that has qualified for Euro 2020. Last week he scored a hat-trick in Holland's 5-0 win over Estonia.

The midfielder says playing on through racist abuse does not send the right message to fans and does not protect those players on the receiving end.

"What I think now is that they use the players to just entertain other people," added Wijnaldum, who is keen to use his platform as one of Europe's leading players to highlight the issues facing black players in the current environment.

"Who defends the players? You basically defend other people because you want the game to go on."

A number of professional players, including the English Premier League's Wilfried Zaha, have announced their own readiness to walk off and Wijnaldum says teammates should support players should they decide on that particular action.

Earlier in November, Italian striker Mario Balotelli was persuaded not to walk off the pitch amid racist chants during a Serie A match between Brescia and Hellas Verona.

"It frustrates me a lot to see that because you don't know what he's feeling. Why don't you support him and just walk with him from the pitch?," Wijnaldum said passionately.

"They don't feel the pain like the person who gets racial abuse."

Wijnaldum was among a number of Dutch footballers to condemn what happened to Moreira and took to Twitter to say "enough is enough."

During the game against Estonia, Wijnaldum celebrated a goal by pointing to his skin, while at the weekend soccer players in Holland temporarily halted games to protest against racism.

"A lot of people don't understand the kind of pain you feel as a black player if you get abused. I felt it a lot, even what happened with the player of Excelsior," Wijnaldum said.

"Even I felt it and I was sitting in my room at a hotel, so can you imagine how much pain there is for the player who really feels that problem?"

READ: Gareth Southgate says England squad is like a 'family'

'Everyone can solve this problem'

Wijnaldum also said he agreed with former Manchester City captain Vincent Kompany that wider diversity in UEFA could lead to a better understanding of the issues facing black players.

European football's governing body has been criticized in recent months for handing out meaningless fines and measly punishments.

"It might be good if a black person or a few black people are in the position because they know how it feels when you get abused," said Wijnaldum.

UEFA did not immediately respond to CNN's request for comment.

Hi: 80° Lo: 48°
Feels Like: 45°
More Weather
High pressure will continue to dominate our weather forecast for this weekend. This will keep our area filled with plenty of sunshine. However, there will be some changes next week in our weahter forecast as low pressure brings back some chances for showers and thunderstorms.

What are some local stores doing since the new CDC recommendation?

Road work of HWY 45 soon to be done

Pet of the Week - Kamala