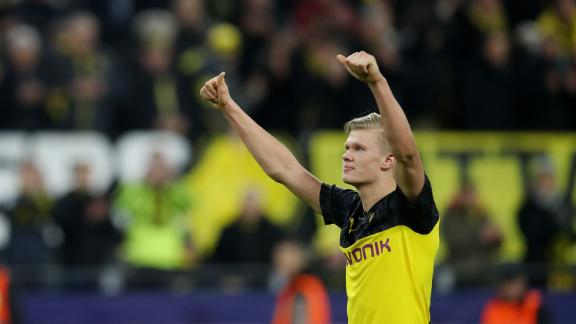 Red Bull Salzburg head coach Jesse Marsch tells CNN why Erling Braut Håland is such an incredible talent and why he's a perfect fit for Salzburg.

Perhaps we shouldn't be surprised anymore, given the frequency with which he does it.

But for somebody so young and relatively inexperienced, Erling Braut Haaland's goalscoring record continues to boggle the mind.

It's not just the goals but the way he scores them, too, and the way he contributes to the team as a whole.

His latest victim was Paris Saint-Germain as two more goals -- the second of which would have made a rocket look sluggish -- gave Borussia Dortmund a deserved 2-1 win on home soil in the round of 16 first leg.

Most had expected goals, goals, goals in this match but at half-time a stale encounter had barely provided even a clear-cut chance, much less troubled the scoreboard.

Jadon Sancho was the star of the opening 45 minutes, turning PSG defenders inside and out with some dazzling footwork, but Haaland stole the show in the second period.

After some slick build up play Dortmund, Raphael Guerreiro's shot in the box was deflected and Haaland reacted quicker than four PSG defenders and goalkeeper Keylor Navas to prod the loose ball into the roof of the net.

All of a sudden, the noise inside Signal Iduna Park, which had just started to bubble with frustrated groans, exploded as Dortmund got the goal its efforts in the opening 69 minutes truly deserved.

But the atmosphere remained at fever pitch for a mere six minutes as the two most expensive players in football history combined to give PSG an equalizer from nothing.

Kylian Mbappe's searing pace left Dortmund's defenders in a crumpled heap on the floor behind him and his ball into the box allowed Neymar a simple tap in.

At that moment, the $457 million PSG had spent on the two players was looking worth every cent.

However, just two minutes after the PSG pair had left Signal Iduna Park in stunned silence, the roof almost lifted off as Dortmund regained the lead once again.

It was another teenage sensation who created the goal, 17-year-old Giovanni Reyna -- son of former USMNT international Claudio Reyna -- spinning on the ball in midfield and driving towards goal.

Haaland took one touch to control Reyna's pass before rifling a thunderous effort into the roof of the net.

Such was the power with which he hit the ball, Navas didn't even bother stretching out his arms to attempt a save; he knew it was unstoppable.

Today's brace means Haaland has now scored 11 goals in his first seven games for Borussia Dortmund since his January transfer.

The Norwegian wonderkid also rewrites the Champions League history books by becoming the fastest player to reach 10 goals in the competition, taking just seven games to reach the milestone.

"He's a great, great footballer, he scores really well -- and he's also a great guy and a little bit crazy, he's funny," a beaming Emre Can told BT Sport after the match. "Hopefully he will continue like that."

PSG defenders, conversely, will be hoping he doesn't.