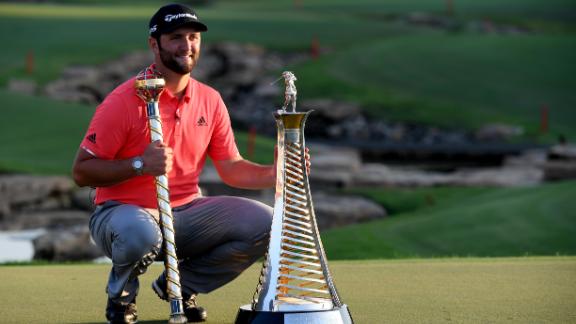 Golf's season-ending DP World Tour Championship takes place at Dubai's Jumeirah Golf Estates, but how did the course get built in the middle of the desert?

Jon Rahm birdied the last hole as he held off Tommy Fleetwood's late surge to win the DP World Tour Championship by one shot and clinch the Race to Dubai title on Sunday.

The 25-year-old Spaniard's double success earned him $5 million in total, with Rahm taking home $3 million for winning the World Tour Championship and $2 million for the Race to Dubai's top prize.

The Race to Dubai is a season-long competition to determine the European Tour's No. 1 player. Based on prize money won across 47 tournaments, points are accumulated, with the top five ranked players splitting a $5 million bonus pool.

The late Seve Ballesteros is the only other Spaniard to have clinched the European Tour's top spot -- and that was back in 1991.

"It's really so hard to believe that some of the greatest champions in European golf and Spanish golf haven't been able to accomplish what I have in just three years," Rahm told the European Tour website after his win at the Jumeirah Golf Estates in Dubai.

"So many great players throughout the history of Spain that have had a chance and they didn't get it done. It's just hard to put that in perspective to know that since Seve, I'm the next one to get it done. I can put the words but it just doesn't feel like it's true. It's hard to believe.

"Seve wasn't the calmest out there, he had some passion. So did Ollie, they both do and there's nothing wrong with that.

"Some of the greatest champions in all sports are passionate people that show frustration when they have it and they show their happiness when they do have it, as well. I don't think it's a bad thing.

"In fact, I believe it's a good thing because that's what got me through today on the last few holes."

But Rahm went one better than that, sinking a birdie putt after a super bunker shot to finish at 19-under par and 269 for the tournament.

ICC lights up for emergency workers