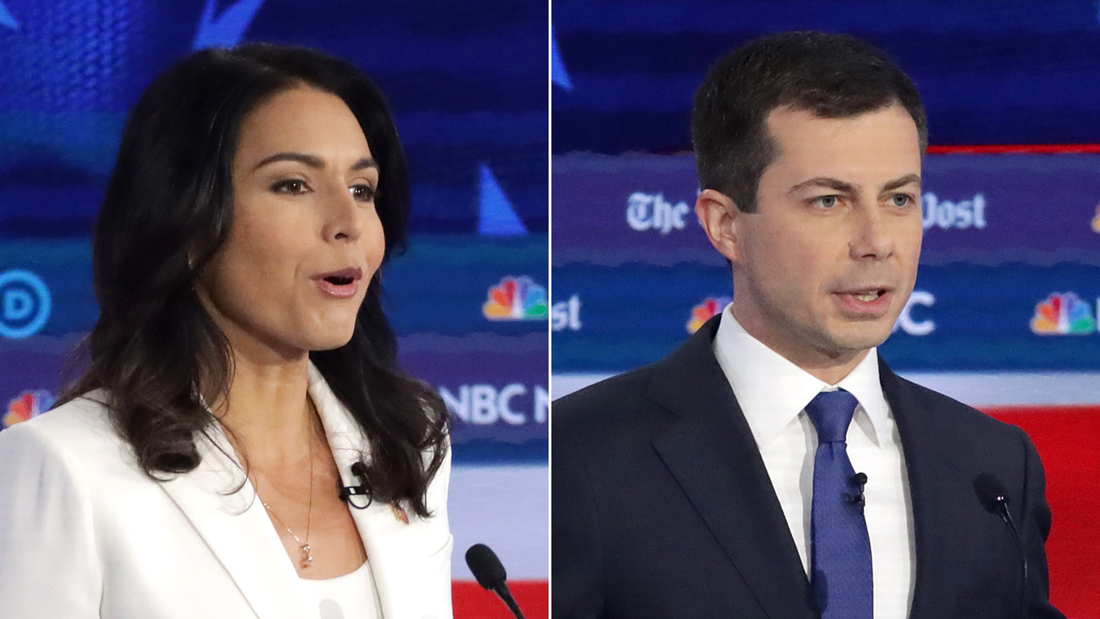 In my career, I've never been accused of grade inflation but I found Wednesday evening's debate to be the best overall this season -- so my grade book runneth over. My two As really were a tie at the top.

Mayor Pete demonstrated some sweet debating techniques that I teach, yet rarely see deployed as well as he did last night. He pivoted questions to keep his answers on topic, but still unique from the other candidates -- and by doing so he provided himself with an advantage.

Buttigieg struck on one key point that, as he noted, has been largely swept under the rug: "The President had to confess in writing, in court, to illegally diverting charitable contributions that were supposed to go to veterans." Many Democrats will agree that the country needed to hear somebody on a national stage emphasize that important point.

But Buttigieg was not a one-trick pony. Far from it. Let's examine his defense. He smoothly reframed the attacks that were leveled at him so that they played to his advantage. For instance, he was asked why he's a candidate worth backing, given that he lost his only statewide election. He replied that, while he may not have "traditional establishment Washington experience," that's not necessarily what the country needs. And when Senator Amy Klobuchar raised the point again, he shot back, saying, "There's more than 100 years of Washington experience on this stage, and where are we right now as a country?"

Buttigieg made it clear that he isn't going to roll over for anybody, especially Donald Trump. Voters needed to see well-harnessed assertiveness, and Buttigieg's tone and demeanor were just right this time.

I don't grade on a lack of speaking time, since it's not the candidate's fault. I coach my teams to make fewer arguments than our competitors, but to make sure the positions we take are thorough and well-grounded.

That said, I dare you to find a bad answer from Andrew Yang in last night's debate. Hint: You won't. He scored an A from me every single time he spoke. I've never witnessed that before.

While it was well into the debate before Yang spoke, his answers about some of the threats to American society once again, brought new ideas to the debate stage. Artificial intelligence, which he's mentioned in previous debates, is a future threat that must be taken seriously. And setting up something like a WTO (World Trade Organization) for data? His ingenuity was astounding. Bold ideas suit Yang well -- and, when well thought out and pragmatic, they get high points in a debate.

She's a master at criticizing others without coming across as a jerk. She called out Tulsi Gabbard for spending "four years full time on Fox News criticizing President Obama" before going on to admonish her efforts to be chummy with Trump and Steve Bannon, and her criticism of the Democratic party. It was a horrible look for Gabbard.

Sanders has found his groove in the last two debates. But he wasn't perfect. For example, he should have given a more direct answer to the question about whether chants of "locking him up" (referring to Donald Trump) should be discouraged.

He did have strong moments, however. In a clever pivot, when asked to defend how Medicare for All is a "revolution," Sanders pointed to the "cruel" and "dysfunctional" health care system before backing his answer up with statistics on how many Americans go bankrupt over medical bills.

Sanders was also excellent on answers about the need to work now to fix climate change and his willingness to deal with controversial adversaries from the Taliban to Saudi Arabia and Iran.

Even better was when she articulated her three-year plan for Medicare for All, and it answered many questions that have been posed in the past. She needs to continue adding this to her answer. She also had a sharp explanation about the fact that we subsidize white, but not black wealth through housing. I lowered her score a bit due to her response that the number of people who serve in the military should be higher; while she gave a heartfelt answer about the benefit of service to the country, she didn't clarify whether she believes the military could use a larger number of troops.

Logical flaws are not an issue with the senator. Booker had an interesting answer on abortion by linking it to voter suppression. He also spoke intelligently about homeownership and gentrification.

But in some areas, he came up short. His best criticism of Biden was off-topic. Booker was asked an important question about Trump's border wall, but he gave a two-line response before turning to a discussion of race and marijuana, and using it as an opportunity to attack Biden.

If candidates chose to ignore the question and pivot to that they think are their best positions instead, what are the moderators for?

I teach my debaters the importance of every single word. You can lose a debate by simply saying the wrong word at the wrong time. Enter Joe Biden.

Yes, he made a couple of big gaffes. You don't use the word "punching" when emphasizing a talking point about domestic violence. And it matters. You don't refer to the "only African-American woman that's ever been elected to the United States Senate." (Another one was standing on stage with you, Joe.) His defense was that he thought he said "first," but he didn't. He said "only." And it matters. These small mistakes might have not been a huge setback for any other candidate, but they are magnified because of Biden's history of slip-ups.

I'm predicting pundits will focus on those two incidents and lose track of the bigger picture, which is that Biden was having his best debate yet. His "only" mistake overshadowed a great response to Booker's attack about legalizing marijuana. Decriminalize it, and let out those who are jailed because of it.

Apart from the mess-ups, Biden was on a roll. Plus, his critique of Tom Steyer for having invested in the coal industry hit home.

If there's one thing we know about Amy Klobuchar, it's that she loves a good canned line. Actually, I enjoyed one too — her quip about receiving $17k for her campaign from her ex-boyfriends was kind of funny, for a change.

Klobuchar had many thoughtful answers on everything from voter suppression to women being held to a higher standard, to abortion. Her biggest error was criticizing Buttigieg's lack of experience, and she ended up getting the worst of the exchange when Buttigieg responded with a sharp answer.

He still needs a public speaking coach. His eye contact with the moderators was better at first, but by the end of the debate, they were again fixated on the camera.

It didn't help his grade that Biden accused him of ties to the coal industry prior to his turn to politics, while others were fighting for the environment.

Guilt is a weird motivator. And Steyer had no good answer to this criticism.

On a positive note, he had a good answer about addressing homelessness.

She was called out by both Harris and Buttigieg -- effectively.

Gabbard had a good answer on the reform needed in the criminal justice system, but then mistakenly pivoted from it to preaching about treating people with respect. She should have stayed on topic.

She could have given a thoughtful answer about climate change but she instead said it was not a Democrat or Republican issue. This is coming from a candidate who has appeared on conservative television and radio, where climate change is used as a wedge issue between the scientific community and the public. Voters (and debate coaches) will at best see this as an insincere attempt to preach unity and at worst see it as deeply hypocritical.

By car, by foot, by horse: Search ongoing for on-the-run kangaroo in Alabama

6 Dr. Seuss books won't be published anymore because they portray people in 'hurtful and wrong' ways

2A and 5A Basketball Semifinals