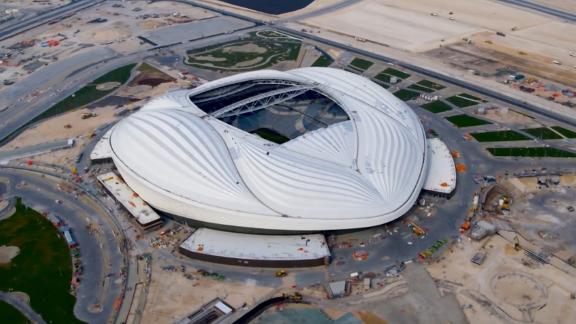 Like a glistening pearl on a sandy ocean floor, the Al Janoub Stadium stands out from the desert landscape of Al Wakrah in Qatar.

It is one of the first of eight stadiums completed for the 2022 World Cup in the small Gulf State and is equipped to deal with the unique challenges facing this edition of football's showpiece.

Temperatures in Qatar can reach around 43 degrees Celsius (109 Fahrenheit) in June when World Cups have traditionally taken place. With this in mind, the tournament will instead kick off 21 November and conclude 18 December.

But winter in Qatar is a relative term with the mercury rising to as high as 30 degrees. To combat the heat, stadiums will be equipped with high-tech cooling systems which in turn raises concerns over the environmental impact of such an undertaking. How will the stadiums keep fans and players cool while avoiding flames from eco-conscious critics?

"You can see the big volume of this stadium, we don't even cool one tenth of that big volume," Saud Abdul Ghani, a professor at the College of Engineering at Qatar University, who has led the project since 2009, told CNN's Amanda Davies inside the Al Janoub Stadium. "We only cool about two meters where the (fans) are and about three meters where the people play."

Staying cool despite heat from critics

This technology has been used in a variety of areas from fishing to farming and is considered one of the more ecologically friendly means of cooling air. It minimizes water waste and uses existing hot air to power the process.

It's not just the air temperature that has made FIFA, world football's governing body, and the local organizing committee hot under the collar. Eyebrows were raised when Qatar was controversially awarded the World Cup in 2010 amid allegations of bribery and corruption.

Visit our football page for more news and videos

There have also been allegations of human rights violations against workers with concerns raised over possible mistreatment of traveling LGBTQI+ fans in the majority Muslim country.

"Was Qatar treated unfairly? Yes, in my opinion, very much so," Nasser Al Khater, chief executive of the World Cup organizing committee, told CNN. "I believe that Qatar has been judged by the court of perception very early on."