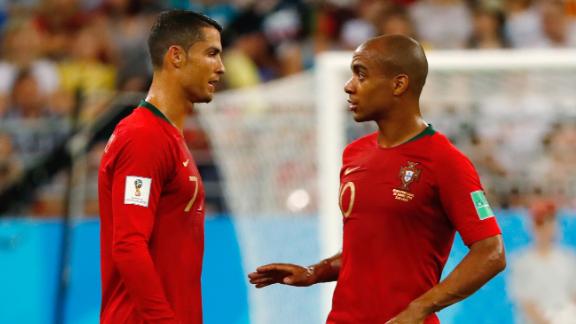 Lokomotiv Moscow and Portugal midfielder Joao Mario speaks to Alex Thomas about racism in football and his relationship with superstar Cristiano Ronaldo.

Serie A's disciplinary tribunal on Tuesday ordered the club to close the Poltrona Est Stand, the section of its stadium where the abuse was heard in Sunday's game, for its next home fixture against Fiorentina on November 24.

Balotelli, born in Italy to Ghanaian parents, threatened to leave the pitch during his side's 2-1 loss, picking up the ball in the second half near the corner flag and kicking it towards the fans that were abusing him with monkey chants.

He was stopped by teammates and Verona players, who consoled the 29-year-old. The game did continue and Balotelli scored a stunning goal in the 85th minute.

Verona also confirmed earlier on Tuesday that it had banned the head of the club's Ultras Supporters Group, Luca Castellini, from its matches until June 30, 2030 for "considerations and expressions [...] utterly contrary to the ethical principles and values of this club."

In an interview with Radio Cafe on Monday, Castellini said that Verona fans were merely being "irreverent" and that Balotelli could never be considered completely Italian.

Italy international Balotelli responded to Castellini in an Instagram story on Monday saying his comments had "nothing to do with football."

"You are getting into social and historical situations that are bigger than you, you small-minded people," he added.

Balotelli also took to Instagram after Sunday's game, thanking his "colleagues on and off the pitch" while also condemning the offenders.

"Thanks to all the colleagues on the pitch and outside of it for the solidarity shown towards me and all the messages received from you fans. You have proven to be real men, unlike those who deny the facts," he said.

The 'curva' often alludes to the part of the stadium where a club's hard core spectators or 'ultras' sit.

The incident is the latest in a series of events that have marred Italian football.

A day earlier, a game between Roma and Napoli was briefly suspended after Napoli's highly-rated Senegalese defender, Kalidou Koulibaly, was racially abused by a section of Roma fans in the Italian capital.

In September, Inter's striker Romelu Lukaku was subjected to monkey chants as he took a penalty at Cagliari in September.

Like Balotelli, it wasn't the first time it happened to him in Italy.

When Balotelli, who has also played for Manchester City, Liverpool, Milan and Inter, referred to people denying the facts, he might have been thinking of Verona manager Ivan Juric and club president Maurizio Setti. They both insisted nothing happened.

"Balotelli's reaction? I'm not afraid to say it: Today there was nothing," said Juric. "Lots of whistling and teasing against a great player, but there was nothing else. I have also taken so many insults over the years, I know what it means, but today there has been nothing.

"On the reason of the reaction you have to ask him. When there are racist choirs, I will have no problem saying this because they suck even if they come from my fans, but today I haven't heard a single one. We don't create a case where there isn't, it would be a lie!"

However, a report in Italian sports newspaper Gazzetta dello Sport said a monitor from Italy's football federation was at the game and heard the abuse coming from around 15 fans.

Verona club president Setti said in a statement that he apologized to Balotelli "in case someone might have said something to him.

"I can confirm that we didn't hear anything," he said. "I arrived in Verona eight years ago and I could immediately see how the Verona fans are ironic, yes, but absolutely not racists,

"When there are episodes of racism we are the first to condemn them, we have always done it, but it's wrong to generalize it, speaking of racist chants and fans, if out of 20,000 people a few might have said something.

"Those two or three people, if there are, we are ready to take them and punish them because I strongly condemn such incidents.

"But talking of Verona if we were stuck 30 years ago is wrong: We're a club and fans that has only sport in its DNA. There are many black guys who wear yellow-blue from Youth to the First Team, racism is a discourse that for us does not exist and Verona is not the right place for such generalizations."

But Brescia backed Balotelli and took issue with Verona's stance of attempting to "deny or minimize the gravity of the incident.

"What happened in the affected area of the pitch was not only heard by Brescia's players, but also by the opponents, and presumable by the referee, considering televised images that show teammates, opponents, and referees repeatedly trying to convince Balotelli not to leave the pitch."

A stadium announcement was made saying both teams would leave the field if the abuse didn't stop as the match was halted for a few minutes.

"Brescia football club expresses all its indignation to the fact that, even today, episodes of this kind and of such gravity can occur: this afternoon it happened to one of our players but it could have happened to anyone else, of any team, and the sentence should be as equally firm and determined," added the Brescia statement.

The Italian football federation didn't immediately respond to an email seeking comment about the weekend's events. European governing body UEFA, however, said in an email sent to CNN that the "fight to eliminate racism, discrimination and intolerance from football is a major priority" but added it wasn't within its jurisdiction to deal with incidents in Serie A.

"UEFA can only open disciplinary proceedings for matches which take place within its competitions. For cases of possible discrimination which occur in domestic matches, the relevant national association is the competent body."

Visit our football page for more news and videos

Brescia, meanwhile, sacked manager Eugenio Corini after the loss to Verona due to a string of poor results. Brescia sits third-last in Serie A.