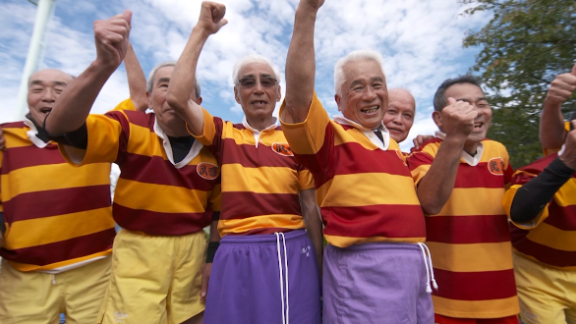 The Rugby World Cup has seen rugby fever sweep across Japan as a whole new generation of Japanese rugby fans have been inspired by the incredible exploits of the country's national team, the Brave Blossoms.

Age is a just a number to 75-year-old winger Isao Tsulabayashi, who is a member of Tokyo's Buwaku Rugby Club.

"For me rugby is a tough sport," Tsulabayashi told CNN Sport's Christine Macfarlane. "I train myself to harden my body for rugby."

Buwaku is one of 150 clubs across Japan that offers full contact rugby to players over the age of 40.

Watching from the sidelines, the pensioners engage in crunching collisions and perform intricate attacking moves preceded by coded lineout calls.

Players wear different colored shorts to identify their age -- red for the 60-year-olds, yellow for the 70-year-olds, purple for the 80-year-olds and, for the particularly evergreen, gold for the 90-year-olds still sidestepping their way around the park.

"Rugby really is fun, I have nothing to say other than that, there is no other reason to love it," said the 79-year-old Seiji Mura, who plays hooker and wears yellow shorts. "Other than I want to be popular with the girls."

Japan's national rugby side, the Brave Blossoms, have defied expectations at this World Cup. Triumphs over the more established European nations Ireland and Scotland helped the host top its group and secure passage to the quarterfinals for the first time in history.

A 26-3 defeat to South Africa spelled the end for Japan, but its dynamic style of play captivated fans around the world.

"I'm dreaming that some day we will be able to play like them in future," said Mura, who has seen Japan progress from minnows of the rugby world to a genuine heavyweight worthy of its place at the elite table of the sport.

Japan has the oldest population in the world with 28% of its citizens older than 65 according to the World Bank. In addition, the country also has the second highest life expectancy in the world at just under 88-years-old.

"This is how to live in the ageing society," explained 80-year-old flanker Kenji Miteki, as he reflected on the importance of staying active. "Everyone dies someday. It would be better to have a plan for the end of life."

But what of the health risks given the physical intensity of rugby? Mura remains unperturbed.