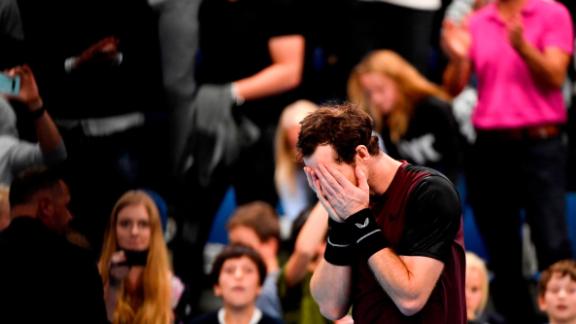 Former world No. 1 Andy Murray says he "never expected" to be winning titles so soon after recovering from a second hip surgery in as many years.

There was a time not long ago when Andy Murray never thought he'd be able to play tennis again, let alone win titles.

But nine months after his second round of hip surgery, the former world No. 1 says his recovery has exceeded expectations after he defeated Stan Wawrinka to win the European Open, his first ATP title in over two years.

"I never expected this, certainly not this soon," 32-year-old Murray told CNN's Don Riddell after his victory in Antwerp, Belgium.

"I saw that there was potential for me to come back and do well probably five, six months after I had the operation but back in January I never expected this."

Murray lost the first set and was down a break in the second against Wawrinka but rallied to win 3-6 6-4 6-4, lifting his first title since the Dubai Tennis Championships in March 2017.

The three-time grand slam champion had hinted at retirement after getting knocked out in the first round of the Australian Open at the start of the year, but opted instead to undergo hip resurfacing surgery in a bid to resurrect his career.

He started playing ATP Tour events again in August and has since risen 116 places through the rankings with Sunday's win taking Murray to No. 127 in the world.

The Scot broke down in tears at the side of the court after defeating Wawrinka, something that he says was caused by a "build-up of emotions that I've had over the last couple of years.

"I was unhappy for the last couple of years because I was in constant pain," he added. "I was struggling to sleep, just walking around was difficult.

"I just wanted to have the operation in January to be pain-free, it didn't matter whether I played tennis again ... deep down I always wanted to try and get back to playing, I just never knew if it was going to be possible or not."

"I feel like I'll be able to compete hopefully with the best players next year," he said.

"In terms of putting targets on it, I'm going to play a lighter schedule than I would have done previously. So ranking is not going to be at the forefront of my thinking.

"I want to try and get back to competing at grand slams and hopefully having good runs there. I don't know exactly how far I'll get."