Nancy Pelosi isn't all women, but for a moment she was 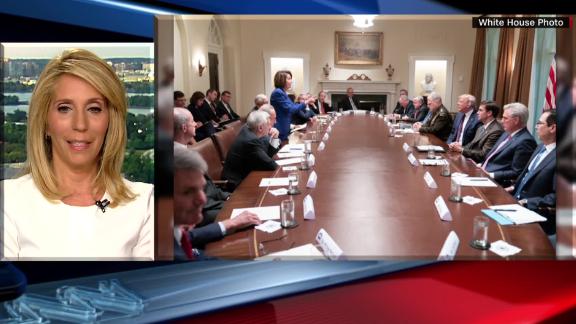 CNN's Dana Bash talks about the symbolism and political context of the photo showing House Speaker Nancy Pelosi standing up at the table with President Donald Trump.

We see you, Nancy Pelosi.

Demanding answers, demanding to be heard. We see you, Madam Speaker -- the highest-ranking woman in Washington -- standing up to the world's most powerful man, President Donald Trump. You are standing alone around a table filled with men, extending your finger, refusing to back down.

And we cannot look away from that photo, cannot stop sharing it across social media, or, thinking about what it means for us -- all the women who have found themselves in a similar position in workplaces across America. We too have confronted the wall of white men of privilege who have tried to demean and dismiss us, as President Trump did to you.

In that White House meeting on Syria on Wednesday -- held shortly after Republicans and Democrats in the House voted overwhelmingly to pass a resolution condemning the Trump administration's military withdrawal -- Pelosi said she wanted "a clear plan for how Americans will be protected from ISIS, which has been further unleashed." Trump hastily withdrew American troops from Syria last week. Pelosi didn't like the answers she got at the meeting with Trump and his advisers.

But this time, the joke's on Trump.

He thought America would see weakness in Pelosi. He tried to promote the stereotype that women are "too emotional" to lead -- a laughable idea, especially coming from Trump, with his seemingly daily public rants, usually delivered on Twitter, over the past two years.

But while many women are celebrating the photo as a testament to the power of women leaders (Pelosi herself even made the photo her Twitter cover shot) black and brown women like myself have little cause to cheer.

We see the racism in rooms full of decision-makers with few or no faces of color. We see the absence of ourselves, our voices, our communities at the highest levels of government. The image is a painful reminder of the privilege that white men, and, yes, white women, lord over all of us in the workplace.

Black and brown working women are so often disconnected from even the Nancy Pelosis of the world, though that doesn't diminish the respect we have for her successes.

We are angry that, in our fight for workplace equality, "diversity" often means having one or two white women in top positions, often women who seem little concerned with fighting for our equal footing. And many of us are tired of this reoccurring corporate practice.

According to the Fortune 500 list reported in June of this year, there were 33 female CEOs leading the nation's highest-grossing companies, which means women held 6.6% of all the CEO positions at those firms. At the time, just two of these women were black -- Starbucks COO Rosalind Brewer and Ursula Burns at the telecom giant VEON. Since the report was published, Burns has been replaced by a white male, leaving one black woman on the list.

Pitiful, yet those numbers are considered progress by some, because they were an all-time high for women CEOs, an increase from the 4.8% (24) of women CEOs in 2018.

It's frustrating, especially up close. The systemic, seemingly normalized, racism and sexism I experienced in the media industry is one of the main reasons I decided to leave corporate America and launch my own business -- a decision made by many women of color today. My time spent in far too many meetings that mirrored the Nancy Pelosi meeting photo, and the empty promises of racial and gender inclusion that I watched play out over decades, were, sadly, enough to make me lose hope that anything would ever change.

It is not lost on me that Thursday we lost another justice fighter in Congress. The passing of US Congressman Elijah Cummings, D-Maryland, one of America's leading voices in the fight for civil rights, justice and equality, leaves many in the black community afraid that we've lost our biggest champion in Washington. Cummings, chairman of the powerful House Oversight Committee, will be dearly missed.

Pelosi choked up when she spoke of her colleague and friend at her press conference Thursday. She and Cummings fought many battles together on Capitol Hill, and Pelosi lovingly summed up the life of the man America grieves today:

"Chairman Cummings' story was the story of America: a sharecroppers' son who dedicated his life to advancing justice, respecting human dignity and ending discrimination. He believed in the promise of America because he had lived it, and he dedicated his life to advancing the values that safeguard our republic: justice, equality, liberty, fairness."

Great leaders like Elijah Cummings and Nancy Pelosi remind us that justice, equality and dignity are always worth the fight.