Boxer Patrick Day dies four days after being knocked out 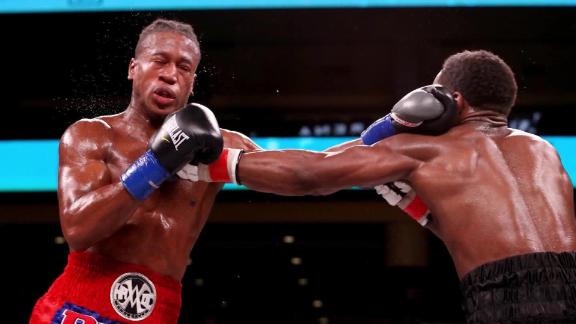 Boxer Patrick Day died four days after he was knocked out during a fight with Charles Conwell in Chicago.

Boxer Patrick Day died Wednesday, four days after he was knocked out during his bout with Charles Conwell on Saturday night in Chicago.

Day, 27, succumbed to a traumatic brain injury he suffered that night, according to a statement from his promoter, Lou DiBella of DiBella Entertainment.

"He was surrounded by his family, close friends and members of his boxing team, including his mentor, friend and trainer Joe Higgins," DiBella said in a statement. "On behalf of Patrick's family, team, and those closest to him, we are grateful for the prayers, expressions of support and outpouring of love for Pat that have been so obvious since his injury."

In a Twitter post addressed to Day on Tuesday, Conwell wrote he "never meant this to happen to you."

"All I wanted to do was win. If I could take it all back, I would," Conwell wrote. "No one deserves this to happen to them. I replay the fight over and over in my head thinking what if this never happened and why did it happen to you."

After Conwell, a 2016 Olympic boxer, knocked Day out in the 10th round, Day appeared to be down for several minutes as a medical team rushed in to assess his injuries. Eventually he was taken out of the ring on a stretcher, and transported to Northwestern Memorial Hospital.

DiBella said that Day didn't need to box as he came from a good family, was educated and could have made a living in some other way.

"He chose to box, knowing the inherent risks that every fighter faces when he or she walks into a boxing ring," DiBella said. "Boxing is what Pat loved to do. It's how he inspired people and it was something that made him feel alive."

Conwell was in control of the fight in Wintrust Arena from the beginning, according to ESPN.

Before he became a professional fighter, Day was a highly decorated amateur. He won two Nationals titles, the New York Golden Gloves tournament and was an Olympic Team alternate, all in 2012.

Dibella said it is "very difficult to explain away or justify the dangers of boxing at a time like this."

"While we don't have the answers, we certainly know many of the questions, have the means to answer them, and have the opportunity to respond responsibly and accordingly and make boxing safer for all who participate," DiBella Entertainment said.

"This is a way we can honor the legacy of Pat Day."

CORRECTION: A previous version of this story misidentified Patrick Day's promoter. His name is Lou DiBella.