Debate coach: A star emerged from the Democratic debate 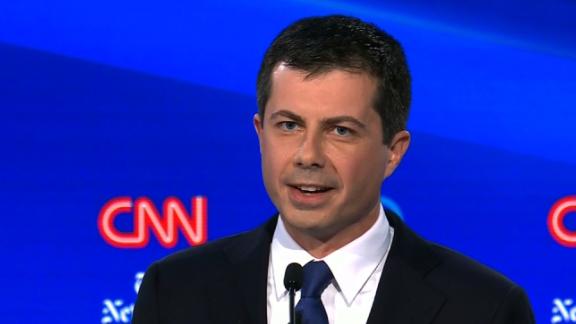 During the latest Democratic presidential debate, Mayor Pete Buttigieg criticized Senator Elizabeth Warren (D-MA) for refusing to give a "yes-or-no answer" to questions about the costs of her "Medicare for All" health care plan.

In Tuesday night's Democratic presidential debate, I'm afraid most of the candidates blended into the stage for me at some point. But that doesn't mean there wasn't a star among them. Here's how each candidate performed:

Throughout the three-hour event, Sen. Sanders was consistently sharper than normal, and he outperformed the others, especially Elizabeth Warren, when explaining the financials of his healthcare plan. I liked his attitude about his health: we can judge it by watching him take the campaign by storm. He was the star of the evening.

Sanders remained firm and defiant when it was called for, asserting that nobody can trust our foreign policy because President Donald Trump is unpredictable. And when Joe Biden heated up toward the end of the debate, saying,"I'm the only one on this stage that has gotten anything really big done," Sanders was ready to put things in perspective by replying: "You got the disastrous war in Iraq done. You got a bankruptcy bill, which is hurting middle-class families all over this country. You got trade agreements, like NAFTA (The North American Free Trade Agreement) and PNTR (Permanent Normal Trade Relations), with China done, which have cost us 4 million jobs."

Overall, Sanders' nonverbal communication -- typically hyper with lots of hand-waving -- was reined in, and that served him well. His animation was kept to a minimum, which was smart and effective.

Sen. Harris flourished by doing the opposite of Sanders. Rather than being restrained, she brought a bit more energy to her debate performance, which she needed.

On the topic of abortion, nobody was more powerful than Harris, who declared: "Women are the majority of the population in this country. People need to keep their hands off of women's bodies and let women make the decisions about their own lives." And Harris got the better of Elizabeth Warren when asking Warren to support the suspension of President Trump's Twitter account.

But a couple of stories didn't land. For instance, when debating a tax credit to close the income gap, Harris told a childhood anecdote about her mom sitting at the kitchen table wondering how to "make it all work." In the past, Harris has hit home runs with these personal stories, but this time around, she had none that were especially memorable.

Mayor Pete was pretty effective in policy arguments. He provided several options for depoliticizing the Supreme Court, and more than held his own on health care and gun control. Buttigieg also won most of the direct skirmishes he entered with other candidates. He got the best of Tulsi Gabbard when discussing Syria and keeping our military commitments. He called out Elizabeth Warren when she failed to satisfactorily explain how she'd pay for Medicare for All.

But then he slipped up when he made a back-and-forth about gun control with Beto O'Rourke needlessly personal. After O'Rourke remarked that policymakers should "lead and not be limited by the polls and the consultants and the focus groups," Buttigieg retorted: "I don't need lessons from you on courage, political or personal." The remark seemed to come from left field. Mayor Pete responded as if he was called a coward, but that simply wasn't the case.

Phantom attacks like these happen often in competitive debates when expectations of an opponent's arguments don't always match the reality of what has been said. It was an unfortunate miscalculation by Buttigieg.

Sen. Booker had a good tone throughout the evening. He was conversational, which is what I teach my students to strive for. Booker was also solid on content, consistently taking arguments one step further, like when he mentioned how anti-abortion laws disproportionately affect low-income women and the need to talk about child poverty when discussing tax systems.

On the downside, Booker focused too much energy on chastising everyone else over their tones and argument style when talking to one another (he was right, but then he overplayed his hand and his criticism seemed canned). Speaking of canned, what was the joke about Bernie Sanders being a fan of medical marijuana? Round peg, meet square hole.

Bold ideas suit him well. While Yang's defense of his Freedom Dividend (a universal basic income of $1,000 a month) was lacking in support in this debate, he made up for it by defending other unconventional ideas. Yang floated the idea of decriminalizing opioids, which impressively got support from O'Rourke. Yang was smart to point out that Elizabeth Warren's plan to implement a wealth tax has been tried. "The problem is that it's been tried in Germany, France, Denmark, Sweden, and all those countries ended up repealing it, because it had massive implementation problems and did not generate the revenue that they'd projected," Yang said.

There were a few arguments where Yang was less successful. Booker overshadowed him on the topic of breaking up large tech companies. While Yang expressed skepticism over some benefits of breaking them up, Booker pointed out that the issue is not just competition, but that these large monopolies "undermine our democracy."

Yang also could use a bit more practice finishing his arguments. While he made a good point that our data should be treated as our property, his analysis was incomplete. Yang needed to more fully explain what having control of our data would mean for Americans.

He all but disappeared in parts of the debate, so it was difficult for him to climb the grading scale. However, Castro had some on-point analysis when discussing why communities don't want cops coming to their house under the guise of confiscating assault weapons. This approach was bold but risky. It could work against him if his criticism of weapon confiscation is interpreted as anti-police.

Sen. Warren needs to answer the questions. She is simply too smart to ignore the topic she is being asked to address -- especially when she's asked the same thing multiple times. Should Trump's Twitter account be suspended? I personally don't know -- and neither, it seems, does Warren. How is she planning to pay for Medicare for all? Again, she left us wondering,

Warren also came across as petty by implying it was not Biden but President Obama who should be credited with helping some of her bills become laws during the Obama administration.

While I found her delivery to be less than optimal at times, Klobuchar had some good points. She spoke thoughtfully on Roe v. Wade, taking on Big Pharma and income inequality.

Unfortunately, Klobuchar got caught in an awkward nonverbal moment when Castro was speaking on the topic of monopolies and the camera panned over to her. Her blank expression reminded me of when I catch a student on a cell phone during class. It's a good reminder to look engaged at all times -- you never know when you'll be in the spotlight.

If I could give her one piece of advice it would be to please stop using the scripted jokes. No one is laughing.

O'Rourke was simply average the entire time. He argued better than he did during the first debate, but was an expected let-down from his last debate. Unfortunately, the issue of guns, which he has made a central point of his campaign, was probably the worst part of his performance on Tuesday. O'Rourke needed more evidence to support his belief that owners of AR-15s and AK-47s will voluntarily give up their weapons under an assault rifle ban.

The best part of former Vice President Joe Biden's debate came toward the end when he highlighted his accomplishments. While still not as smooth as it could have been, he made a convincing argument: "I'm the only one on this stage that has gotten anything really big done, from the Violence Against Women Act to making sure that we pass the Affordable Care Act to being in a position where we, in fact, took almost a $90 billion act that kept us from going into a depression..."

Unfortunately, this came a bit late in the night. And for every good answer, Biden had multiple slipups. Examples include whatever this means: "And lastly, and I apologize for going on, but lastly, what is happening in Iraq is going to -- I mean, excuse me, in Afghanistan, as well as all the way over to Syria, we have ISIS that's going to come here ..." Once you've fumbled that much, you've lost the audience.

Biden needs to take his own advice and eliminate some of the clutter in his mind when he's answering questions. As he said in the debate, "And this is one of the reasons why these debates are kind of crazy, because everybody tries to squeeze everything into every answer that is given." Exactly.

Congresswoman Gabbard probably put off a lot of people with her responses. Drawing from the Republican playbook, she complained about the mainstream media and pointed out that she disagreed with Hillary Clinton on many issues. At the end of the night, when candidates were asked to explain a surprising friendship, Gabbard talked about her relationship with Republican Trey Gowdy. The same Trey Gowdy that Trump tried to hire for his impeachment defense team.

However, my favorite part of the whole debate was when apparently Gabbard tried to take over the moderators' jobs and pose a question to the other candidates. She was quickly shut down when moderator Erin Burnett jumped in and announced a commercial break.

This was Steyer's first debate, and I had no problem with any of his answers, so in that regard, it was a success. But on public speaking 101, he failed. Have you ever met a person who never breaks eye contact until you feel uncomfortable? Steyer's nonstop eye contact with the camera made me feel the need to look away. It looked totally unnatural. We can only hope that he watches himself back and makes a note to blink in the next debate.

Hi: 76° Lo: 47°
Feels Like: 52°
More Weather
High pressure will continue to dominate our weather forecast for this weekend. This will keep our area filled with plenty of sunshine. However, there will be some changes next week in our weahter forecast as low pressure brings back some chances for showers and thunderstorms.

What are some local stores doing since the new CDC recommendation?

Road work of HWY 45 soon to be done

Pet of the Week - Kamala