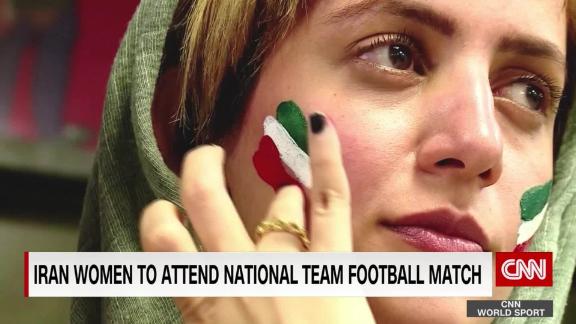 The author and journalist James Montague is a Middle East football expert. He spoke to CNN World Sport's Don Riddell about why it's taken so long for Iraq to get back home, as well as Iranian women being able to officially enter a football stadium for the first time in decades

For Iraqi soccer fans, the waiting is almost over.

After an eight-year hiatus, the Iraq men's national team will play its first competitive fixture on home soil when it faces Hong Kong in a World Cup qualifying match in Basra on Thursday.

Now, with the hope of reaching the 2022 World Cup in Qatar, Iraq is gearing up to play in front of its own fans -- the first time it has done so in a competitive match since the 2-0 defeat by Jordan in Erbil in 2011.

"This is a huge deal because pretty much since 1980 it has been very difficult to host a competitive international football match in Iraq," football writer and author James Montague told CNN.

"First there was the Iran-Iraq war, there was the first Gulf War, the second Gulf War, then sanctions, general instability. Every time football has tried to return to Iraq there's been another catastrophe that has meant it has been impossible to take place.

"But over the past few years as Iraq has moved back towards something approaching normality, there's still big problems, there's huge protests in Baghdad right now, football is slowly beginning to return."

Excitement has grown since the decision to allow Iraq to resume hosting competitive matches was made by FIFA in March 2018.

While Iraq has hosted a number of friendly games in recent times, competitive games have been played in Iran, Jordan and Kuwait.

After Hong Kong, it will welcome Iran and Bahrain in World Cup qualifying games next month as it seeks to qualify for the tournament for the first time since 1986.

Three cities -- Basra, Erbil and Kabala -- have been cleared to host competitive fixtures by FIFA,. The nation's capital, Baghdad, where anti-government protests have been taking place over the past week, is yet to receive permission.

"We've waited so long for this historic moment," defender Saad Natiq told FIFA.com ahead of the match.

"Personally, I can't find the words to express how I feel. It's a huge accomplishment for the Iraqi people.

"This match will have a special place in the history of Iraqi football, as it's been many years since we played in our own country. This will be a big incentive for us to make our fans happy. Our dream now is to secure World Cup qualification for Iraq on home soil."

Defender Ahmad Ibrahim, who is hoping to win his 93rd cap for Iraq on Thursday, says the players are desperate to be part of history.

All the players want to take part in this match as it will go down in the history of Iraqi football," he told FIFA.com. "We'll be playing in our country and in front of our home crowd.

"We have a huge responsibility playing in front of our supporters as we have one of biggest and most football-crazy fan bases in West Asia. This will definitely help the players, and I hope we live up to expectations in what we expect to be a completely sold-out arena.

"Playing at home is always an advantage for a national team, and it's something we've missed dearly in recent years."