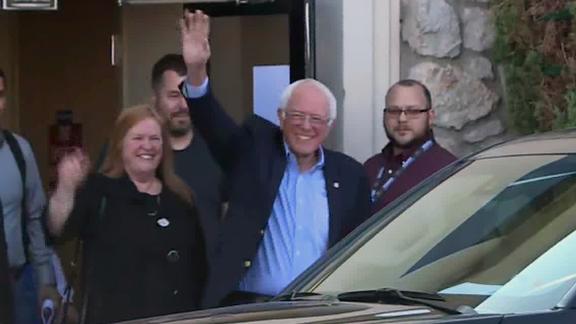 We've recently learned two things about Bernie Sanders: that he had a heart attack, and that he was not immediately forthcoming with the news. I wouldn't go so far to call this a "cover-up," not in the Age of Trump, where an entire presidency is a cover-up. But it's dismaying, as it feels like political "business as usual" for Bernie to lack transparency, even for a few days, and even under these vulnerable conditions.

Bernie is my senator, a fellow Vermonter. (Like most people around here, I call him Bernie.) I've been a supporter since he ran for mayor in Burlington some 30 years ago. In my view, no American politician has done more to advance progressive causes in the United States, pushing the Democrats from terrified middle-of-the-road positions on health care and economic inequality to a place we never dreamed we'd see in this lifetime.

He has spoken loudly for the poor, the disenfranchised. He was an early opponent of the Iraq War, unlike Joe Biden. He has a strong grasp of the existential threat posed by climate change.

But the heart attack is now a political problem — for him and the Democrats. It may not be possible for Bernie to continue pushing himself in the way he'd have to push himself to be nominated and to beat Donald Trump.

And beating Trump has become a national emergency. As recent weeks have shown, Trump is dangerously out of touch with reality, with no understanding of the constitutional separation of powers. Trump's behavior with regard to Ukraine (which is likely the tip of a proverbial iceberg) — and more blatantly, his invitation to China to interfere in America's election — makes it clear that he is willing to upend the democratic process itself, OUR democratic process, using his vast authority solely for his own, personal benefit.

It goes without saying that he should be removed from office, but the Republican propaganda machine is working overtime, and millions of people seem happy to yield their fundamental rights as Americans to this one man.

Trump needs a strong Democratic opponent, one who is up to a blistering task. I wish to God Bernie were 68 and not 78, and that his health was better.

I write this having spent a day this week at the hospital, undergoing an angiogram myself because a sibling had a heart attack a few weeks ago, and I've had a worrying breathlessness. The details are unimportant to anyone outside my immediate circle of family and friends, but let's just say I have a renewed sense of human vulnerability. The cardiologist came into the antechamber to the operating room before my procedure and said, "You have two things going against you. You're male, and you're over 70."

I admit to both. (My angiogram, for the record, showed clear arteries.) But I must admit to my own sense of fragility as a human being. I may well continue to work and live well for another couple of decades. And I hope very much that Bernie Sanders recovers well and continues to speak up for the disadvantaged for decades to come. We've seen US senators who have continued into their 80s and 90s to provide useful wisdom and perspective. As a nation, we really must learn to treasure our experience. As we read in Psalm 90:12: "Teach us to number our days, so that we may apply our hearts to wisdom."

But youth — even relative youth — is precious, and whoever is president of this country after Trump's disastrous years will have unbelievable demands on his or her body and soul. Trump, by the way is 73. Joe Biden is 76.

Elizabeth Warren turned 70 a few months ago, with the inherent advantage my doctor spoke of: she's a woman.

I personally hope that Bernie has the wisdom to accept that he has already won. His arguments are now central planks in the Democratic debates, and there is a vast progressive movement that he has fathered. May he get well and continue for years to be a force for change.

Yet it may be time for Bernie to say, with nobility and generosity: "I now support Elizabeth Warren. She is a warrior for good, and she's in better health than I am. Together we can make America truly great in ways previously unimaginable."

Hi: 96° Lo: 73°
Feels Like: 100°
More Weather
Friday we will see the hottest and most humid day of the week. We will see many areas top off in the 105 to 115 degree heat index. Some areas will approach 120. Very little chances for some isolated showers and thunderstorms for the late portion of the afternoon.

MHP: Second wreck on I-22 in Lee County

18-Wheeler turnover on I-22 in Itawamba County

Chelsea's Thursday morning forecast: Once again we are seeing a lot of heat today