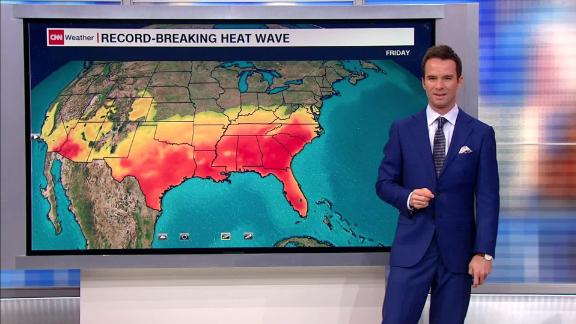 Today is the final day of record heat for much of the southeast. CNN meteorologist Derek Van Dam has the latest and who will see an end to the summer temperatures.

Today we'll get a look at the September jobs report. Experts say the job market should look strong, even with a dip in job creation compared to last year. But trade anxieties and fears of future economic instability could make for some worrying trends.

The revelations keep coming in the impeachment inquiry into President Trump's relationship with Ukraine. Trump's former special envoy to Ukraine, Kurt Volker, yesterday released text messages exchanged with a Ukrainian aide to President Volodymyr Zelensky. The text messages, sent before the July 25 call at the center of the impeachment inquiry, provide a tangible link between the call and Trump's request that Ukraine investigate his political interests.

Trump doubled down on his actions, saying in a tweet that he has the "absolute right" as president to ask other countries to investigate "corruption." He also told reporters at the White House that China should also launch in investigation into Joe and Hunter Biden (the subjects of Trump's interest in Ukraine communications); there is no evidence of wrongdoing by the Bidens. Meanwhile, a satirical video about the Bidens that Trump tweeted out has been removed from Twitter after a copyright complaint. The video featured a long-running internet joke involving a song by Canadian rock band Nickelback.

Four people were killed yesterday in a knife attack at the Paris police headquarters. Three officers and an administrative worker were killed by a fellow staff member, a 45-year-old man who had been an employee since 2003 at the police station, which is on the same small island as Notre Dame Cathedral. The attacker was shot dead by police. Authorities don't have a motive yet, but the man's wife was taken into custody, and it's unclear if she was present at the scene. A lockdown has since been lifted in the area of the attack, but the incident has left the city shaken. French President Emmanuel Macron and Paris Mayor Anne Hidalgo both extended condolences, and Hidalgo says the victims will be formally honored soon.

A humanitarian crisis is growing in Haiti as anti-government gatherings have shut down schools and resulted in fuel shortages and lack of safe water. Today, protesters are calling for a large gathering in the city's capital of Port-au-Prince to demand the resignation of President Jovenel Moise. Haitians have been calling for Moise to resign for several months over a long list of complaints, including soaring inflation and alleged corruption, but recent demonstrations have caused a different kind of crisis. The United Nations this week said its humanitarian efforts have been impacted by the protests, affecting access to medical care and choking off fuel and water supplies. The UN also said some schools have been closed for the past two weeks, leaving about 2 million children without access to education.

US Sen. Bernie Sanders says he's planning to leave the hospital this weekend and will be back in action in time for the next Democratic primary debate. The 78-year-old presidential contender had an unscheduled heart procedure this week after doctors discovered a blockage in one artery, and his campaign said he would be off the trail for a bit to recover. There is no word yet on when exactly Sanders will return to his busy 2020 schedule, but campaign surrogates will fan out across the country this weekend, headlining events in Iowa, New Hampshire and South Carolina. According to one aide, the mood inside Sanders' campaign headquarters is "business as usual."

A rare, mosquito-borne virus continues to threaten parts of the northeastern US. A fourth person has died in Michigan after contracting Eastern Equine Encephalitis, bringing the nationwide total to 11 deaths. That's an unusual uptick: On average, the country sees five to 10 cases of the virus in an entire year, and 30% of those cases are typically fatal. Connecticut's Lt. Gov. Susan Bysiewicz has attributed the spread of the virus to climate change, citing the number of infections in nearby states and their timing so late in the year. The CDC says people in impacted areas should use insect repellant and avoid the outdoors after dark to lessen their risk.

Microsoft has released a strange-looking competitor to Apple's coveted AirPods

Why have these little earbuds become such a big status symbol?

A $124,000 reward is being offered for the return of a solid gold toilet stolen from Winston Churchill's birthplace

One headline, SO many questions.

Ah, the drive-thru: where a minute feels like an hour.

The world' best bar for 2019 is revealed

Unless it serves uncomplicated, reasonably priced drinks in a quiet environment, we'll pass.

"Warner Bros. -- and artists in general -- certainly have a right to make the kind of art they want to make, but the argument that we make is that with that right comes a great deal of responsibility."

Igor Volsky, of gun control advocacy group Guns Down America, who helped draft a letter from families of Aurora, Colorado, theater shooting victims to Warner Bros. to encourage them to combat gun violence with their creative choices. The studio's movie, "Joker," hits theaters this weekend. The villain origin film has been criticized for its violent imagery, and some cities have even taken extra security measures to prepare for its release.

That's how many obese children there will be in the world by 2030, according to a report from the World Obesity Federation. The report says children in developing countries in Africa, Asia and Latin America are particularly at risk due to changing lifestyles and the growing popularity and aggressive marketing of junk food. There are now about 158 million obese children worldwide.

Which state passed a law this week allowing college athletes to get paid for their image and likeness?

In the future, robots will probably rule us all. Even tiny, incredibly quick, little robot mice? That remains to be seen. (Click here to view.)

Pets of the Week - Sugar & Spice

Minor injuries reported in train versus vehicle collision in Sherman