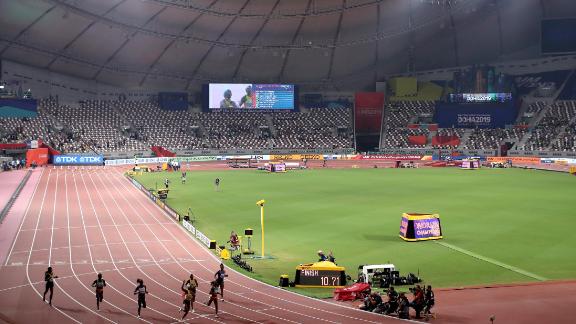 One of the biggest storylines from the World Athletics Championships in Doha, Qatar have been the small crowds watching the action unfold.

Athletics has been crying out for the next Usain Bolt and Noah Lyles, the sprinter with the silver hair, proved he might just be the heir apparent to the fastest man of all time.

On Tuesday, Lyles delivered on his pre-IAAF World Athletic Championships promise to win 200-meter gold -- and then some in Doha, Qatar.

The 22-year-old American, who models his hair on Goku, a character from the Japanese anime series Dragon Ball-Z, took gold in a time of 19.83 seconds.

Bolt's world record of 19.19 remained comfortably intact but Lyles has already pledged to lower the Jamaican's seemingly impossible marks for both the 100m and 200m come Tokyo next year.

As he crossed the line in first place, Lyles said: "It's been a long season but I'm still out there and I'm still having fun, and I still have many goals to achieve."

In a sport and a World Championships bedevilled by negative headlines -- from Alberto Salazar's four-year doping ban to collapsed marathon runners in the searing heat and empty stands in Doha -- the event and athletics as a sport desperately needs stars like Lyles.

IAAF president Seb Coe has talked of crowning the sport's new stars and the American is happy to be more than just fast, unlike his more understated teammate Christian Coleman -- the 100m champion in Qatar.

On the start line, Lyles looked to the heavens and roared -- akin to the sort of histrionics of Bolt before his retirement in 2017. And like the Jamaican, the American delivered in style.

In the build-up to the World Championships, Lyles had sounded a confident note, writing on Instagram that he was starting "the biggest journey of my life and, with God's plan I will come out victorious."

At only Lyles' first major global championships, it is perhaps premature to talk about a legacy, although the 22-year-old has only to look at Bolt to see how it's done.

Tuesday's victory means Lyles has not lost at a meeting since finishing fourth at the 2016 US Olympics trials and that was when he was still a high-school student.

His American teammate in Qatar, Justin Gatlin, described him as "a rock star -- he likes to put on a show." And inside the Khalifa International Stadium, Lyles did just that, at an event much maligned for its lack of atmosphere, the noise from the crowd befitting of a new champion.

Off the track, Lyles knows how to play the game. He might not yet be a household name like Bolt but he has already strutted his stuff on the catwalk at Paris Fashion Week and produced his own hip-hop album, which he described as a mix between Kendrick Lemar, Kanye West and Jaden Smith.

However, behind the effervescent smile, there is a story of hardships that has toughened him up on and off track.

He describes himself as a loner, suffering from asthma as an infant and a series of allergies as well as being diagnosed with attention deficit disorder. He has also spoken openly about a battle with depression.

The one Bolt meeting

Born in Florida, the family relocated to Virginia. Lyles' parents were both accomplished sprinters without quite setting alight the athletics world like their son.

Lyles does not lack for confidence. He has the word ICON tattooed on his side and, when he ran a personal best of 19.50 seconds for the 200m in Paris earlier this year -- the fourth fastest time in history -- he posted the message "Bolt who?" on social media.

Despite the bravado, Lyles is also wary of the comparison with Bolt. But with the 2019 season now nearly over, the man that would be king is making a good start as sprinting's new global force.

He has already achieved something Bolt never did, in fact no man has, winning the Diamond League 100m and 200m titles in the same season.

As for eclipsing Bolt's records and times, the multiple-Olympic champion Michael Johnson tweeted earlier in the summer: "Lyles is the only American I've seen that I believe can surpass 19.32 [Johnson's previous 200m world record]. However, he's probably more appropriately focusing on 19.19!!!"