'They need the cool factor': Tony Hawk on skateboarding at Tokyo 2020 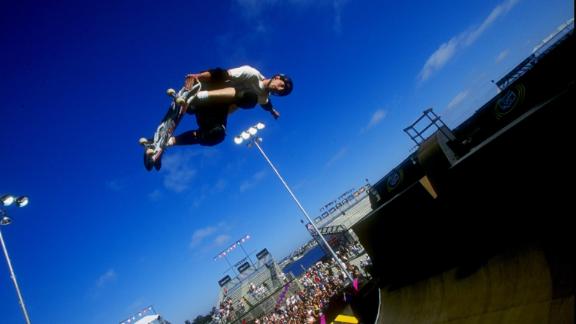 Skateboarding legend Tony Hawk talks to Patrick Snell about the cultural and philosophical of the sport.

That is the message from skateboarding legend Tony Hawk who told CNN Sport's Patrick Snell, "They need the cool factor."

Hawk cemented his status as an icon in the sport when he became the first skater to complete a 900 degree flip -- at the time a seemingly insurmountable challenge --- at the 1999 X-Games in San Francisco.

Soon after he launched the video game "Tony Hawk Pro Skater," which established one of the most popular franchises in the medium, generating more than $1.4 billion in sales.

Hawk likened skateboarding's potential impact on the Summer Games to snowboarding in the Winter edition.

"The viewership is not getting any younger and it feels a bit stagnant," he said of the global event that takes place every four years.

"They need this to get the excitement level that we have at skateboard events. I don't think we need their validation because we're already validated. And I mean really, how many more swimming events can you watch?"

READ: Breakdancing moves one step closer to making the 2024 Olympics the raddest yet

Skateboarding is one of four sports debuting at Tokyo 2020.

Alongside karate, surfing and sport climbing, skateboarding has been included for the first time, a clear indication that the International Olympic Committee has recognized the need for more adrenaline fueled, high octane events that will capture the imaginations of a younger audience.

"Skating has really infiltrated mainstream culture," said Hawk, who is currently the live broadcast commentator for the Vans Park Series.

"It's come on exponentially in terms of acceptance and participation and global awareness.

"There are skate scenes in Afghanistan, Cambodia, Thailand and parts of Africa. I never expected any of that when I started skating. It was pretty much in southern California and that was about it."

Hawk is proud of the strong sense of community that is fostered in skate parks around the world.

"It's very supportive and very creative," he said. "You go to a skate park and see a kid trying something and suddenly all the other skaters rally around him and encourage him. It is a collective effort for everyone to get better. The community embraces you."

But with four gold medals up for grabs -- 'park' and 'street' events for both women and men -- Hawk is under no illusions that the best skaters in the world will bring a sharp competitive edge to the Games.

The threat of controversy looms, however. Like figure skating or diving, winners and losers will be determined by the subjective opinions of a panel of judges. Is Hawk concerned by prospect of contentious decisions?

"I don't think so," Hawk said. "Skating is a little bit looser in terms of how you judge creativity and technicality. I have faith."