Women's marathon to go ahead at World Championships despite heat fears ... at midnight 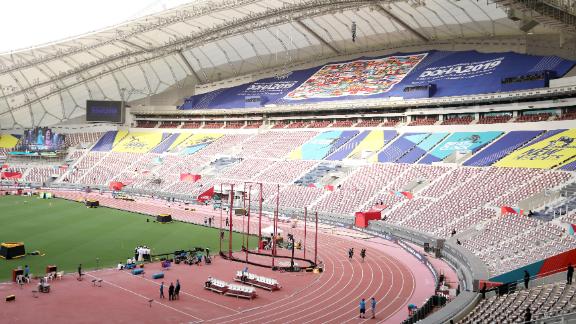 Amanda Davies reports from the Khalifa International Stadium in Doha to preview the 2019 World Athletics Championships.

Despite expected temperatures of nearly 30 degrees Celsius, the women's marathon at the World Athletics Championships in Doha, Qatar will go ahead as planned on Friday, organizers say.

Sixty nine women are on the start list with the race scheduled to start a minute before midnight (local time).

In a statement, organizers said that the temperature at the start time would be at or below 30 degrees Celsius (86 degrees Fahrenheit).

"This is within the range (28 to 30.9 degrees) that has been predicted and planned for in the past six months," said the International Association of Athletics Federation (IAAF) -- track and field's governing body -- in a statement.

In a meeting on Thursday, team leaders and doctors were given a briefing about race conditions.

READ: 'I don't see this as a personal issue,' says Seb Coe on Caster Semenya case

"Any decision to alter the starting time of the event will be made by 10.30 p.m., on the recommendation of the IAAF Medical Delegate, who also has the authority to withdraw any athlete before or during the event if he believes the athlete is experiencing any type of severe distress," added the IAAF statement.

Organizers have increased refreshment points along the course and recruited "leading experts" as part of the medical team to minimize potential heat-related risks.

Unfortunately for the marathon runners, the state of the art cooling systems inside the Khalifa International Stadium -- which will help keep the scorching heat at bay during the championships -- will not come to their aid on the outdoor route.

The World Championships run between September 27 and October 6.