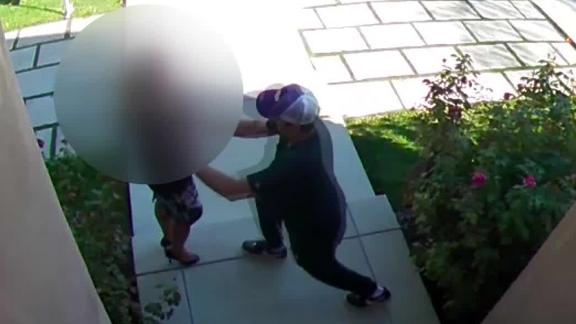 A California real estate agent was attacked during an open house by a man she said had been to her showing before. CNN affiliate KCAL/KCBS reports.

In the hours after a Los Angeles-area man was arrested for allegedly assaulting a California real estate agent during an open house, more people have reported attacks to authorities, police said Wednesday.

Alen Karaboghosian, 45, was booked early Wednesday for assault with a deadly weapon and was held on $130,000 bail, according to Lt. Chris Ramirez of the Los Angeles Police Department. Police say he is shown on surveillance video attacking a 51-year-old real estate agent on Sunday.

The suspect was also arrested for multiple counts of sexual battery related to additional crimes already being investigated, a police spokesman said.

It was not immediately clear whether Karaboghosian, a resident of Encino, has a lawyer. He has not yet appeared in court.

The Los Angeles County District Attorney's office does not yet have the case, according to spokesman Ricardo Santiago.

The real estate agent was at an open house Sunday in Encino when the suspect approached her, police said in a news release.

Surveillance footage shows the two talking outside the front door. The man's face can be seen as he removes his hat and looks into the camera. Then, after shaking her hand, the video shows the man pushing her to the ground and running to stand over her.

The video does not show what he did when she was on the ground. The woman said the man fled the scene.

The woman sustained minor injuries to her leg, but she told CNN affiliate KCAL she might have suffered much worse if not for her screaming.

The agent said she had seen the man before.

She told KCAL he had come to an open house she hosted and that something in her gut warned her that he was dangerous.

"I had a feeling from Day One that this person can hurt me," she said.

Because of that feeling, she asked a friend to stay with her during Sunday's open house. But once that friend left, the man arrived, KCAL reported.

Feeling uncomfortable, she directed her conversation with him to the porch, the station reported. She said the man asked her to show him the closets, to get him a water and to use the bathroom, but she declined to go in the house with him.

She says she does not know if she will continue to work as a real estate after the attack. CNN does not publish the names of sexual assault victims who request anonymity.

The real estate agent was injured with bruises and cuts during the incident but is OK, her manager, Bob Siegmeth from Keller Williams Realty in Porter Ranch, said.

It's been traumatic for her, Siegmeth added.

CNN has contacted the real estate agent but she said she was not ready to comment.

After video of the attack was shown on television, several people have come forward to report being the victim of a physical or sexual assault by the same man, police said.