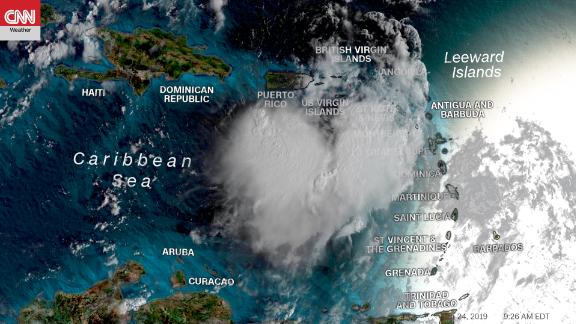 Karen regains tropical storm status and heads for Puerto Rico, which was rattled by a 6.0 magnitude earthquake overnight. Karen is expected to bring heavy rain to Puerto Rico and the US Virgin Islands, before possibly heading to the US mainland. CNN's Chad Myers has the latest.

As Puerto Rico still recovers from Hurricane Maria, Tropical Storm Karen is taking aim at the US territory.

The center of the storm on Tuesday "will pass near or over Puerto Rico and the Virgin Islands," the National Hurricane Center said.

The heavy rain and tropical-storm-force winds could be treacherous.

"This could be enough to bring down trees, and the infrastructure for power is still weak after Maria, so I anticipate power outages," CNN meteorologist Michael Guy said.

"Strong rip currents will also be a danger for the next few days -- (Tuesday) for the southern shores of the islands, and northern shores through Thursday."

As of late Tuesday morning, Karen was spinning about 65 miles south-southeast of San Juan. The storm was hurling 40-mph winds.

"Slow strengthening is expected during the next couple of days," the National Hurricane Center said.

Karen will likely dump up to 4 inches of rain across the islands, with some isolated areas getting up to 8 inches.

"These rains may cause flash flooding and mudslides, especially in mountainous areas," the hurricane center said.

Even as the center of the storm moves away, rainfall and threats of flooding will continue through Wednesday, it said.

"We emphasize to the citizens to prepare with caution and evaluate if they need to go to a shelter," she tweeted.

The governor announced she was suspending classes and work for government employees on Tuesday.

Puerto Rico's Department of Education said it was also "taking the necessary measures" to guarantee security during the storm.