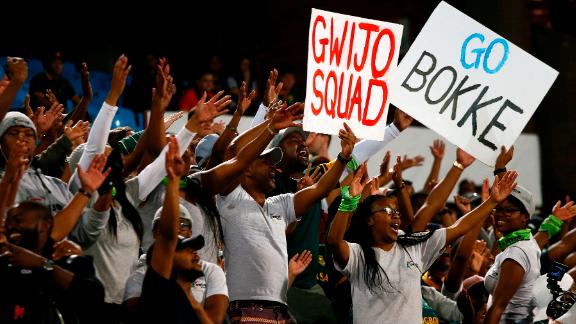 The final whistle rings out around Ellis Park stadium in Johannesburg. It's June 9, 2018 and the South Africans have resurrected a lost cause against England, overturning a 24-3 deficit to secure a dramatic and try-laden 42-39 victory.

But the result is almost immaterial. The match will forever be remembered as a turning point in the history of South African sport. It was the first time a black African -- Siya Kolisi -- captained the Springboks, the national rugby team named after the leaping antelope on its crest that for so many people in South Africa is still an emblem of apartheid.

Kolisi has the No. 6 on his back. It is the same number worn by former president Nelson Mandela when he handed captain Francois Pienaar -- also wearing No. 6 -- the Webb Ellis Trophy after South Africa beat New Zealand in the 1995 Rugby World Cup final. It was hard to ignore the poignancy of the occasion.

After completing his post-match media responsibilities, Kolisi skipped the lap of honor his teammates were undertaking and instead made a beeline to a cluster of fans gathered on the opposite side of the field.

"He came straight to us," Chulumanco Macingwane, 35, told CNN Sport. "It was mind-blowing. He came over and it was in that extraordinary moment that we knew we had started something special.

Macingwane was surrounded by 77 other people who had arrived at one of world rugby's great stadiums with a single purpose — to sing traditional and spiritually significant African songs known as igwijo -- as part of the newly formed Gwijo Squad.

"These are songs that speak to our African roots and reach deep into our ancestral past," explained Sibusiso Mjikeliso, South African journalist, broadcaster and author of "Being a Black Springbok: The Thando Manana Story."

"They are songs that have been sung for generations at coming-of-age initiation rites, weddings, funerals and at times of celebration and struggle. They are songs of love, of mourning, of challenge and ritual."

But they were never heard in rugby stadiums, at least not with this much confidence and so many voices. Apartheid might have fallen when Mandela's African National Congress swept to power in the country's first democratic election on 27 April 1994, but racial divisions have endured.

According to a 2018 report from the World Bank, South Africa is the most economically unequal country in the world with the gap between rich and poor widening.

The promise of a new dawn 25 years ago proved to be false. Despite economic policies that have attempted to distribute the country's resources, the white minority population is more likely to enjoy a privileged lifestyle while the majority of black and mixed-race people remain confined to the lower rungs of the socio-economic ladder, as shown by research conducted by the South African Human Rights Commission.

READ: How Wales created a home-away-from-home ahead of the Rugby World Cup

"I have friends who have been told to 'go watch soccer,'" said Macingwane, alluding to the widely held perception that rugby is a sport for white people and soccer is the pastime of the black majority.

"I've had funny looks in stadiums and I know people who live in Pretoria who love rugby, who played rugby, who know more about the sport than most, but who would never set foot in Loftus Versfeld out of fear of being a target," Macingwane explained, referencing the stadium in the heart of the city that would have been off limits to black people during apartheid.

"This is something that all black rugby fans have had to put up with and many have sadly turned their back on the sport."

What pains Macingwane most of all is that rugby in South Africa is anything but a white man's game.

The sport was first played in the Cape colony around 1862 before spreading along the coastal regions where British imperial forces and their families settled.

Speaking to ESPN in 2015, Hendrik Snyders, a historian and the heritage manager of the South African Rugby Union, said the South African Coloured Rugby Football Board was formed in 1897, demonstrating a strong culture of rugby outside of white communities.

Snyders said his research showed "four of the oldest clubs in the country were formed in non-white communities."

"We wanted to bring that to the rugby stadiums that for so long were unwelcoming spaces and show we were not guests or intruders," Macingwane said. "For too long a cognitive dissonance existed in South African rugby fandom. We're out to change that."

Macingwane probably wasn't thinking too much about social change back in June 2017 when he was watching a match between the University of Fort Hare -- an esteemed institution in the Eastern Cape and alma mater of prominent African leaders, including Mandela -- and Wits University.

READ: Japan set to host a 'special' World Cup as rugby steps into the unknown

With Wits in a commanding position, the stadium announcer began leading the Fort Hare fans in gwijo songs which prompted an immediate response from their players. Though time ran out on a remarkable comeback, the effect of the songs stuck with Macingwane.

"What if we could turn an entire stadium into something authentically African?" Macingwane mused. "What if the English or the Australians felt every kilometre they'd traveled from home and knew that they had arrived somewhere intimidating?"

They started small. The Gwijo Squad debuted with 35 members attending a match between the French Barbarians and South Africa "A" at Orlando Stadium in Soweto.

For 80 minutes they brought an energy never felt beyond the rolling hills of the Eastern Cape or the handful of racially diverse clubs dotted around South Africa's eight other provinces.

The seeds were planted and with England's three Test tour scheduled for June 2018, the Gwijo Squad kicked into gear.

Macingwane set up a WhatsApp group and encouraged his friends to spread the message. "I circled the first Test at Ellis Park in my diary and promised to make it work one way or another," he explained.

A bank account was opened with members contributing roughly R120 ($8.20) a month in order to cover the cost of a ticket close to the action. When new coach Rassie Erasmus announced that Kolisi would be the man leading the Springboks on the pitch, interest in attending the historic clash surged.

Some still had concerns. "A few people wanted to know if they'd be safe," Macingwane said. "For some, even the hardcore rugby fans, it was their first trip to watch the Boks."

"We were actually prepared for a hostile reception and even had contingency plans in case things turned violent. We have some big guys in our group, tough rugby players, but we just didn't know if we would be a welcome addition or not."

Those fears dissipated by the time Handre Pollard kicked off. Throughout the see-sawing encounter, the Gwijo Squad sang the songs of their ancestors. When the final whistle sounded, when Kolisi made that beeline towards them, the Gwijo Squad knew that South African rugby would never be the same again.

"I woke up that morning without any mapped out agenda and went to bed feeling like we now had a duty to take this as far as it could go," Macingwane said.

Macingwane continued: "We also want to offer existing Springbok fans something fresh. We are more than just an ordinary fan group."

As their numbers began to swell so too did their presence in local newspapers, on radio stations and across social media where they now have more than 11,000 followers.

Ahead of South Africa's match against Argentina in Mendoza last year, Kolisi sang igwijo songs in the tunnel, underlining this new brand of Springbok culture. After the match against Australia at Ellis Park in July, Kolisi requested a specific song and sang it in unison with several other players on the touchline.

But not everyone has been as quick to adapt to the shifting tides.

Stadiums around the country still blare out-dated chart toppers from decades ago. "We're often drowned out by songs played over the loud speakers," Macingwane said. "But we just carry on as soon as the song finishes. We out-last them. We endure."

Loftus Versfeld Stadium still plays songs by Afrikaans singer Steve Hofmeyr who once tweeted, "blacks are the architects of apartheid" and heralded the late Afrikaans nationalist Eugene Terre'Blanche as a "proud cultural icon."

Speaking to CNN World Rugby, the stadium's operation's manager Hugo Kemp defended the playing of Hofmeyr's songs. "We make it a good experience for all our supporters," he said. "We try not to get involved [in politics]."

It is worth noting that as of last year, Hofmeyr's song Blou Bul (Blue Bull) is no longer the official song of the club team the Blue Bulls when the players first run on to the field, though it is still played as part of a playlist during matches.

"These stadiums continue to get it wrong and it's costing them money," journalist Sibusiso Mjikeliso said. "Crowd attendances are dwindling and that is directly connected to a lack of understanding of the changing markets. Stadium entertainment still panders to a minority of the country and is a turn-off for fans who would like to see this change.

"Over 90% of the country is either black or mixed-race and those numbers are only increasing. It makes commercial sense to appeal to this demographic.

"We are not here to replace Afrikaans people. We are simply here to become something we were always meant to be —part of the fabric of this proud rugby nation."

The Gwijo Squad has now become a staple at Springbok events. They welcomed the team back from Argentina when Kolisi and co returned with the nation's first Rugby Championship title in 10 years.

They congratulated the 31 players selected for the Rugby World Cup and they bid them farewell at OR Tambo International as the squad departed for Japan with growing optimism that Kolisi could be the one to lift the title in Yokohama on November 2.

Except the Gwijo Squad won't be in Japan. "A major hurdle," as Macingwane put it, scuppered their plans to be there, though he doesn't elaborate.

But they will be watching and singing in fan parks and pubs and living rooms around South Africa. More members will mean more revenue to spread their message. They have produced instructional videos to help in this regard and encourage non-members to approach them at games and sing along.

Speaking to CNN World Rugby earlier this year, Kolisi encapsulated his remarkable journey. "When I was a kid there is no ways I would have dreamt of being a Springbok captain," he said. "But now there is a little kid who maybe had the same background as me that can sit there and say, "I had the same past as Siya, maybe I can also be captain."

For those not blessed with the speed and size and ability of the Springbok skipper, there is now a fan group ready to welcome them.

"We're here to stay," Macingwane declared. "Rugby in South Africa will never be the same again."