'I don't see this as a personal issue,' says Seb Coe on Caster Semenya case 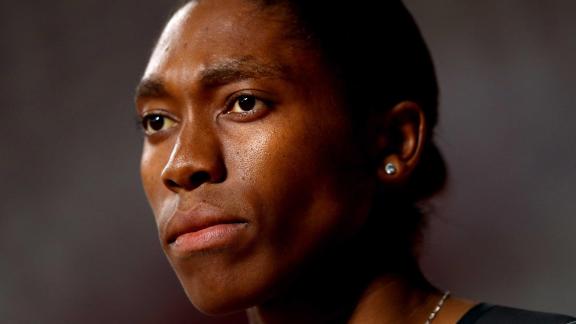 He was a double Olympic gold medalist, but Sebastian Coe's legacy in athletics will perhaps be defined by his handling of the two great modern issues in the sport -- the case involving Caster Semenya and doping.

As president of the International Association of Athletics Federations (IAAF), Coe's actions and those of the organization could have long-lasting effects on generations of athletes, including Semenya.

The 28-year-old South African has been barred from defending her world 800-meter title in Doha this month for refusing an IAAF ruling to take testosterone-reducing medication.

The two-time Olympic champion, who is hyperandrogenous and has increased levels of testosterone for a woman, has become the center of a storm around athletes with a difference in sex development and human rights.

However, Coe admitted to CNN World Sport's Amanda Davies that despite the high profile nature of the case he hadn't spoken to Semenya directly.

"Have you spoken directly to Caster Semenya?" Davies asked Coe.

"No," the IAAF president replied. "And I haven't because this is not about an individual athlete.

But does he have any sympathy for Semenya, an athlete who has not been convicted of doping but who has been denied the freedom to compete because of a rare genetic condition?

"I have clearly a sympathy for the efforts we are trying to make," said Coe. "I hope she does come back on to the track and I do hope that the athletes with that condition to take the medical direction that allows them to do that."

The issue of doping has also been on the agenda of the IAAF recently after 23 year-old American sprinter Christian Coleman missed three drug tests in the space of a year, but has avoided suspension under the World Anti-Doping code, and will compete in Doha.

Coe was asked if missing three tests in 11 months was acceptable.

"Well, look, look," Coe said before calling the whereabouts rule -- which stipulates athletes must provide their anti-doping organization with details of where they can be found for one hour every day for potential testing -- a "really important part of the landscape in that no athlete should be cavalier or coy about."

"The one thing I'm very proud about in our sport is we don't shirk the difficult issues," Coe explained. "Very few big organizations wanted to take the lead role in the challenges around around DSD (disorders of sex development).

"Transgender is going to be a massive issue. I want athletics to always be at the forefront of thought leadership. That isn't an easy position to be in, but it is the right position to be in. I'm happy that our sport is brave enough to want to challenge these issues and take them head on."

While Semenya won't be on the track in Doha. Coleman will be and is the bookies' favorite to claim the men's 100m title, ahead of convicted doper Justin Gatlin.

The two American sprinters are standout figures in a field lacking in household names. Usain Bolt ran his last race in 2017 and Wayde van Niekerk -- reigning 400m world champion -- continues to miss out with a recurring knee injury.

In the women's sprints Shelly-Ann Fraser-Pryce and Dina Asher-Smith willl attract attention, but is a lack of star-quality elsewhere a concern for Coe?

"In my lifetime, I don't remember being more excited about the current batch [of young athletes] that are coming through," said Coe.

"If you take all our disciplines, the top 10 in those disciples, a quarter of them are under the age of 22 to 23. That's a fantastic position to be in and we will have some amazing names emerging."

Coe continued: "We've got a new generation coming through that are communicating well. They're good at this and our sport is in much better shape.

"I cannot think of a time when I've been more optimistic about the future of my sport because of their quality and their confidence that we're in their corner. That we're putting systems in place that are going to protect them."

The IAAF didn't provide details of what level of protection or what duty of care, each individual athlete will receive.

Coe also spoke on the importance of filling stadiums, on keeping sponsors on board, on attracting a new fan base and reaching a new audience through innovative technologies.

He added that he was excited to do "some of the fun stuff now," having laid down the "foundation stones" during his first period as president.

But as new challenges arise -- the reintroduction of Russia after allegations of state sponsored doping that saw 67 athletes banned by the IAAF in 2016, as well as the the organization's role in combating climate change, to name but two -- Coe will appreciate that his organization still has much to do

The World Championships begin on September 27. For 10 days, Coe will hope that conversations stay on the track and a clutch of new fan favorites usher in a new era.