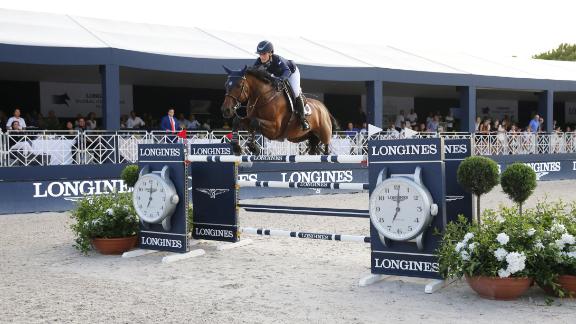 Jessica Springsteen claimed the biggest win of her equestrian career Saturday after riding to victory in the Saint-Tropez leg of the Longines Global Champions Tour (LGCT).

She managed to fend off stiff competition from the current overall leader Pieter Devos, beating the Belgian into first place by just over a second in a thrilling climax.

"I'm still in shock, (RMF Zecilie) jumped so amazing and I'm so happy. She was with me every step of the way," said a beaming Springsteen after her first LGCT win.

"I really can't believe it, I'm so excited."

Despite finishing runner-up, Devos has overtaken Ben Maher in the overall rankings with just one more event to go before the season finale in November.

He laid down the gauntlet in the jump-off with a time of 36.40 seconds which was only eclipsed by Springsteen. Frenchman Simon Delestre also came within a whisker of toppling Devos but he eventually finished third with a time of 36.88 seconds.

Briton Maher did not qualify for Saturday's event which took place next to the famous Pampelonne Beach near the glamorous French Riviera resort.

Guests donned their finest outfits as they watched the action unfold to a backdrop of the Mediterranean.

However, attention has already turned to the New York leg of the tour, held between September 27-29.

Springsteen is particularly looking forward to returning to where she grew up with her father Bruce and mother Patti.

"It's my home town, my whole family are coming. I think it is going to be unbelievable -- I'm so looking forward to it," she said.

It was the team's second win of the season but younger rider Maikel said he is already focused on the New York leg in two weeks.

"New York is the last leg of the season and with this victory we'll move up the ranking," he said.

"It's important we do well in New York to finish the season very well. All the riders are really looking forward to the (GC Prague) Playoffs as it was a wonderful event -- but our goal is to go for it!"