Andrew Yang is right on the 'SNL' racism controversy 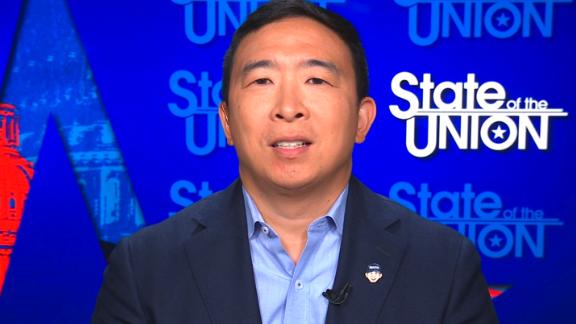 In an interview with CNN's Jake Tapper, Democratic presidential candidate Andrew Yang said racial epithets hurt, but in the case of comedians, words should be taken in a different light. This comes after Yang jumped into controversy on Twitter by responding to Shane Gillis', a new cast member on "Saturday Night Live," past racial remarks on a podcast.

But I'm glad he did. Yang, a former tech executive who is Taiwanese American, has proven to be an unconventional candidate from his plan to give Americans a universal basic income to his refusal to wear a tie to the Democratic debates. And instead of serving up the typical knee-jerk reaction that Gillis should be fired for calling people in Chinatown "f---ing ch--ks" among other things, Yang urged a more nuanced approach that offered the hope that people like Gillis can evolve.

Saturday, Yang responded to Gillis on Twitter and wrote, "Shane -- I prefer comedy that makes people think and doesn't take cheap shots. But I'm happy to sit down and talk with you if you'd like." Yang also wrote, "We would benefit from being more forgiving rather than punitive."

Now to be clear, Yang didn't defend Gillis' remarks. In fact, Yang appeared on CNN's "State of the Union" and said, "I've experienced a lot of anti-Asian racism throughout my upbringing. And it hurts."

But Yang gave the comedian the benefit of the doubt when he tweeted, "I took the time to watch and listen to Shane's work. He does not strike me as malignant or evil. He strikes me as a still-forming comedian from central Pennsylvania who made some terrible and insensitive jokes and comments."

Yang is onto something, and I say that as as a Muslim American. Gillis also made despicable comments about Islam on his podcast. According to Variety, Gillis said the only way to get to "Muslim heaven" was to "spill blood, you gotta praise Allah by spilling blood."

In his apology, Gillis claims "he is a comedian who pushes boundaries." But there was no attempt at comedy there by Gillis -- he was just sharing his misunderstanding of my faith. This is who Gillis is, at least a year ago when he uttered these words. In another podcast, he adopted a Chinese accent, referred to women who disguised themselves to fight in the Civil War as "flat-chested f---ing b----es," and used the word "f---ot" and made other homophobic comments.

Like Yang, there is no way I am defending Gillis' bigoted remarks. But I'd like to call for a nuanced approach and ask if there a way we can reach this person. Is this a person we can help overcome their ignorance and evolve into a better person? Or is the person too far gone in terms of subscribing and peddling hate that such an effort would be a waste of time?

Sometimes we can tell when someone is being intentionally bigoted as opposed to attempting playfulness. That, too, should go into the mix of how we react. Donald Trump, for example, has repeatedly referred to an "invasion" of immigrants while casting migrants as rapists, drug dealers and other criminals. These are just a few examples of Trump's bigotry. It seems unlikely that the 73-year-old Trump will evolve for the better.

When I look at Gillis' comments, it's impossible to believe they are one-offs. But there may still be a chance that as a young person trying find his place, he can change for the better.

And as someone who worked on the "SNL" production staff from 1999 to 2006, I can tell you firsthand that if Gillis were to make comments there like he did on his podcast, he could find himself out of a job -- it's one thing to say those things before you are hired but quite another to utter them in the workplace. At the very least, it's likely he would find himself isolated from others on the show. (On "SNL," if you don't have creative allies, it's almost impossible to get yourself on air -- especially as a new cast member -- given how competitive it is to write and pitch sketches that are selected.)

Ultimately, it's NBC and "SNL's" call on Gillis. (How they didn't vet Gillis and listen to his podcast from 2018 is beyond me.) The words he said may have already made him too toxic for the iconic late-night show. But regardless of what happens, the hope is that people like Gillis can be encouraged to learn and evolve. Of course, the person needs to be willing to do the work for that to happen.

But simply firing and ostracizing anyone who makes any offensive comments without first examining the context, as well as the person's willingness to change, means our society will be worse off in the long run. We should encourage and incentivize people to improve, instead of ensuring that they remain ignorant and hateful.