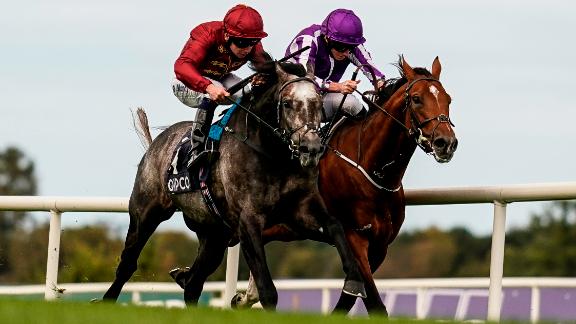 There are few things the Irish love more than horse racing.

From producing some of the world's very best jockeys to some of the greatest thoroughbreds in history, the sport of kings has been entwined with the country's culture for generations.

And if horse racing runs through the veins of the Emerald Isle then the historic Curragh race course is the heartbeat of the operation.

Situated in County Kildare, just a short trip from Dublin, the ancient grounds stretch for thousands of acres beyond the track and are home to the thundering hooves of Ireland's very best horses.

Every day for centuries -- since the very first race meeting at the Curragh dating back to 1727 -- groups of racehorses have galloped through the morning mist to prepare for some of the biggest races around the world.

This weekend, it co-hosts the showpiece Longines Irish Champions Weekend with nearby Leopardstown, a two-day festival that invites some of the world's best talent to this spiritual home of horse racing.

'It's a beautiful sight'

There is evidence of training on the Curragh dating back to long before the birth of thoroughbred racing.

It is thought that chariot races were held in the third century, on the very same 4,870-acre grounds on which about 60 trainers now work their horses.

The name itself is an indicator of just how closely this place is associated with horses. The word "Curragh" comes from "Cuirreach" -- the Gaelic word for "place of the running horse."

"It's a beautiful sight," added Weld, who has trained winners all around the world.

Weld says it's the "flora and fauna" that makes the Curragh such a special place to train horses and credits the ancient ground for producing such an array of talent.

A dazzling array of some of racing's most esteemed horses honed their talent at the Curragh, including the John Oxx-trained Sea The Stars, a dual Derby and Prix de l'Arc de Triomphe winner, who is considered by many as one of the greatest race horses of all time.

Despite being steeped in history, the Curragh Racecourse and surrounding gallops have undergone development in recent years.

They now boast world-class facilities that allow trainers to get the most out of their horses all year round.

During the Irish Champions Weekend, racing fans can also visit a number of leading yards, stud farms and equine hospitals for a behind-the-scenes look at Ireland's racing industry. The Irish National Stud is also situated nearby.

READ: Meet the trainer to royals, rulers and billionaires

The first ever Irish Derby was run at the Curragh in 1866, two years before an act of parliament officially declared it a horse racing and training facility.

The Irish Champions Weekend now brings the curtain down on the Classic season with Irish St. Leger at the Curragh Sunday. The highlight of Saturday's action at Leopardstown is the prized Irish Champion Stakes.

The two-day meeting celebrates not only world-class race horses, but elegant fashion, gourmet food and drink, and other entertainment.

Guests are encouraged to dress up for the occasion, with the best outfits being rewarded with style prizes.

"It's an excellent concept and it's developing all the time and each year it gets better," added Weld.

READ: Royal Ascot -- A day in the life

Having initially trained as a veterinarian, Weld found a passion for training horses and has worked from the Curragh his entire life.

He has gone on to win some of the biggest races around the world including the Belmont Stakes in the US in 1990, two Melbourne Cups with Vintage Crop and Media Puzzle and the prestigious Epsom Derby with Harzand in 2016. He has been named Ireland's champion trainer on 21 occasions.

Like many in Ireland, his passion for horses has been passed down through the generations, as has the knowledge of how to train and breed a champion.

It's this hereditary knowledge and "human history" that Weld says makes the small country such a force on the world stage.

"There's been a great family association with the training and breeding horses for centuries in this country," he said.

"My late father was a highly successful trainer before me and my grandparents were involved in the breeding of horses.

"I think there's a love of the horse in Ireland and it's been a big industry for our country for generations and we know we're good at it."

More scattered showers and thunderstorms in the forecast