Leaving John Bolton out of key Trump meetings is strange 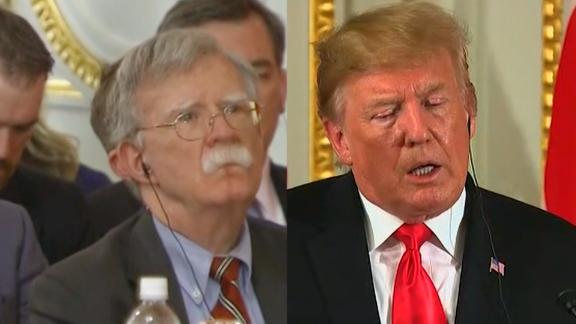 Historically, our country's national security decisions have been made after careful deliberation. Past presidents have relied heavily on their national security advisers to coordinate those critical discussions among members of their National Security Council and then advise on the full range of options.

Afghanistan has been no exception. President Donald Trump's predecessors have weighed how to size our civilian and military presence, how to coordinate with allies and how heavily to invest in a diplomatic track, after consulting with their national security advisers.

Trump, however, has taken a dangerously different tack. And his decision-making process, which involves the sidelining of his national security adviser, forebodes spontaneous and ill-informed policy announcements that could have dire consequences.

According to the Washington Post, national security adviser John Bolton has been shut out of sensitive discussions on Afghanistan due to fears that he may leak information and clash with the President. This follows separate reports that Bolton was not at Trump's recent meeting with Kim Jong Un nor at Trump's 2018 meeting with a senior North Korean official.

The daylight between Bolton and Trump's positions on key issues is well known. Bolton advocated for preemptive military strikes against North Korea before becoming national security adviser and said he was "appalled" by the diplomatic track with Pyongyang. He angered the North Koreans -- and was later undercut by Trump -- when he referred to a Libya model (Libya gave up its nuclear weapons and its leader Moammar Gadhafi was overthrown and killed) of denuclearization for North Korea.

And then there's Syria. Bolton said we'd stay until Iranian proxies were eliminated, and while he hasn't fully implemented it, Trump announced a planned withdrawal a few months later. Meanwhile, Trump's willingness to meet with Iranian President Hassan Rouhani is at odds with Bolton's past calls for regime change in Iran.

On Afghanistan, Bolton and Trump have also clashed. Bolton -- and other critics of engaging with the Taliban -- have questioned whether the Taliban can truly be trusted, and more broadly Bolton has been in favor of military responses to foreign policy problems rather than political ones.

It appears Trump does not share Bolton's same concerns on the US-Taliban peace talks. But, have no doubt, his continued dismissal of Bolton will affect other members of the US national security team. While censoring content from Trump is nothing new, shutting out Bolton because he has a different viewpoint could lead other officials to keep their complete analyses and opinions from the President for fear of being similarly sidelined. And, if the President isn't presented with the full range of analysis and opinions on Afghanistan, he may make decisions that are based on a distorted view of reality or political priorities.

Externally, Bolton's banishment signals to global counterparts that he may not be worth engaging with. This could lead US counterparts to go directly to Trump, rather than work through established channels that have built in vetting and discussion to determine viability.

But the truth is Trump was ignoring Bolton and much of his national security team even before the issue of Afghanistan became front and center. Despite consulting with the National Security Council, Trump has made key national security decisions which are at odds with their advice, including drawing down troops in Syria.

But that idea quickly became a fantasy when Trump announced on Fox News Radio last week that the US will be drawing down troops in Afghanistan. Trump said this while the special envoy for Afghan reconciliation is deep in negotiations with the Taliban.

The Taliban wants all US troops to leave Afghanistan, and the President committing to drawing down may have caught his own team by surprise and reduced the ability to use that drawdown as leverage to get something from the Taliban.

As the national security adviser, Bolton's responsibilities should include tracking whether the President's decisions match up with his stated strategy on a particular issue. While Trump called for a withdrawal from Afghanistan before coming President, he reversed course once in office and decided to send more troops to Afghanistan. At the time, Trump said that conditions on the ground, rather than arbitrary timetables, would determine any American drawdown timelines.

But when Trump announced this week that he would draw down US forces, it was unclear how the conditions in Afghanistan have improved.

Multiple terrorist threat streams remain active in Afghanistan including the Taliban and ISIS. Meanwhile, Afghan security forces are in their worst state in years and lack the ability to hold recaptured territory.

To complicate matters, Trump said he could end the war in Afghanistan in a week and wipe the country off the face of the earth (but wouldn't want to kill 10 million people). One of the first steps in addressing a threat is understanding it, and when Trump makes statements like this, he is signaling his own ignorance with regard to who we are actually fighting in Afghanistan. Afghanistan is an ally of the United States, and part of our mission there is to protect the Afghan people.

In short, Trump does not seem to grasp the complexity of what is required in Afghanistan, which calls for a careful calibrated policy process. His sidelining of Bolton -- and misuse of his National Security Council -- broadcasts that he is just focused on getting out of Afghanistan, no matter the consequences.

Hi: 90° Lo: 63°
Feels Like: 79°
More Weather
We continue to monitor a tropical disturbance in the Gulf of Mexico. This will be in heavy rainfall two locations across the southeast over the course of the weekend, and flooding rainfall could be in tow as well. Things are looking better for Father’s Day itself, thankfully.

Aberdeen Park and Rec building reopening after over a year

The Houston Board of Aldermen Appoints City's First Police Chief

Pet of the Week - Gary