'Details make a big difference': Olivier Philippaerts on secrets of his success 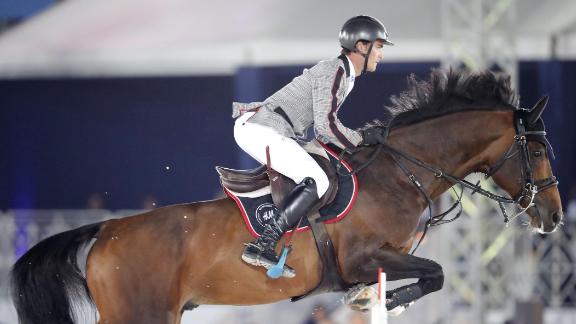 Belgian Olivier Philippaerts comes from a great showjumping family, so he really knows what it takes to succeed on the biggest stage.

The Belgian rider is the latest in a line of sportsmen to emerge from a family dynasty with a true pedigree in the sport.

It's a foundation which has let the 26-year-old flourish in showjumping's elite competition, where he has earned more than $140,000 this season alone.

But what are the secrets of his success?

READ: "It's about mutual give and take: "Jessica Springsteen's secrets of success

READ: "We're both feisty, we fight for each other:" Danielle Goldstein's secrets of success

Philippaerts is aware that having such a sporty family has given him a leg up into the world of equestrian.

The years spent watching his father compete on the world's biggest stage prepared both him and his brother for life in the saddle.

"I've been lucky to have my dad," he told CNN Sport's EQ show.

"[He] has been involved in sport all his life so I got a huge advantage because of that. My brother and I are thankful to have him by our side."

But family can only get you so far and Philippaerts has had to spend years refining his craft to become one of the biggest prospects in the showjumping world.

In 2012, the Belgian became the youngest winner of the Calgary Grand Prix event in Canada and has continued to rise up the rankings ever since.

"Some people want to get very, very nervous before and I just want to be relaxed and do my own thing," he said, speaking about his preparation for the LGCT.

Despite his promise, Philippaerts knows he can't do it all himself.

In addition to his father, he relies on a support network of professionals who look after the horses and manage his schedule.

"You have to make sure you have the right people around you. A good trainer is very, very important," he said, in a message to young riders.

Watch the video at the top to see Olivier Philippaerts reveal the secrets of his success.