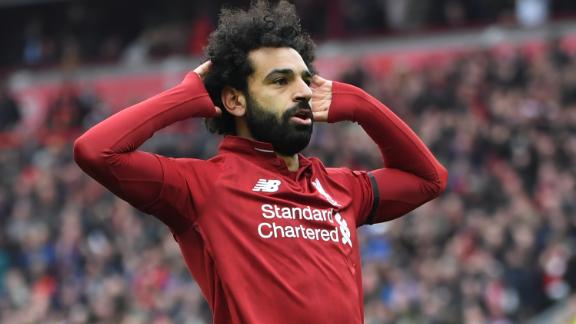 Ahead of Saturday's late Premier League kick-off, Arsenal boss Unai Emery has likely been waking up in cold sweats at the prospect of returning to Anfield to face Liverpool.

Last season's clash -- which started so promisingly with Arsenal taking the lead after 11 minutes -- ended in one of the most humiliating defeats of the season, as Liverpool humbled its opponent 5-1.

Emery joked last weekend that he doesn't "want to play against Liverpool ever" but insisted his team is "motivated" to avenge that defeat.

Arsenal has started this campaign in solid -- if not spectacular -- style, recording narrow wins over Newcastle and Burnley to secure the club's best start to a Premier League season for a decade.

"It's a big challenge," the Spaniard said in Thursday's press conference. "The idea is to continue creating in our way and style. For Saturday we are in good spirits and our players are ready to play with big ambition to do something important.

"We really are in a very good position but we only played two matches in the Premier League. We are going to play 38 in total, so really to be in this moment with the possibility on Saturday to achieve first position is amazing and a really big possibility.

"We know it's only the beginning but we can be positive and optimistic for that match and wishing to show our (best) moment against them, but knowing that it is going to be difficult -- it is a very big challenge and a very big opportunity for us to do something."

READ: Mohamed Salah is 'happy at Liverpool'; less so with the Egyptian FA

Liverpool is the only other team with a 100% start to the season and tops the table on goal difference ahead of Saturday's opponent and Klopp's side has scored at least three goals against Arsenal in each of the Gunners' last four Premier League visits to Anfield.

Liverpool's attacking trio of Mo Salah, Sadio Mane and Roberto Firmino had a field day in this fixture last season, with the Brazilian netting an impressive hat-trick.

However, Emery is adamant that Arsenal's poor recent record at Anfield will have no bearing on Saturday's result.

"Each match, each moment, each season is different," he said. "We can use last year, two years ago, three years ago, four years ago. But really it's about our moment and this moment.

"Anfield is a big atmosphere with their supporters, they are a very good team. In Anfield they have one step more in feeling strong but it's not for us, it's for all.

"We need to take our best performance and to go there with a good feeling and also thinking we can achieve that performance individually and collectively to be strong and to have our chances. We are looking forward to going there and showing that."

READ: Can anyone stop Juventus' march to a ninth successive title?

READ: Mo Salah on women's rights in the Middle East and the Amr Warda controversy

The solid Liverpool defense we had grown accustomed to last season has started to show cracks this term, perhaps largely down to the absence of goalkeeper Alisson who sustained a calf injury in the opening game of the season.

His replacement, Spaniard Adrian, was the hero in the UEFA Super Cup penalty shootout but it was his error that allowed Southampton back into the game last weekend.

This fixture has produced several high-scoring encounters in recent years -- six of the last seven fixtures have seen four goals or more -- and you have to go back to August 2015 for the last 0-0 draw, the only goalless match since 1999.

"We did well against them last year, especially at home, and we'll be looking to do the same kind of thing," defender Trent Alexander-Arnold told Liverpool.com.

"I think over the last few seasons, especially at Anfield, we've always had high-scoring games. That's the way both teams play, in an attacking style of football, so I'm sure both teams will want to win the game and it'll be tough for both sides."