Trump adds Jews to his hit parade of hatred 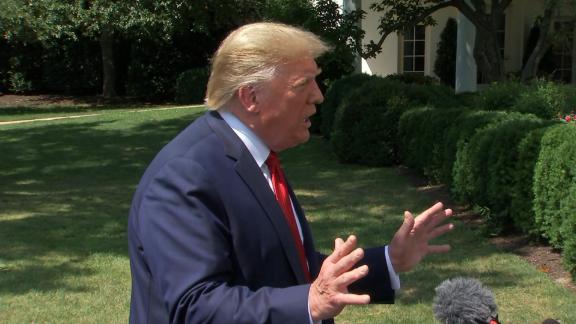 President Donald Trump referred to himself as the "chosen one" while speaking on his role in the ongoing trade war between the US and China.

Seemingly devoted to making our country into the Divided States of America, the President who smeared and offended Muslims and Latinos is now doing the same for Jews. Speaking in the Oval Office, Donald Trump accused Jews who vote for Democrats of having "either a total lack of knowledge or great disloyalty."

With those nine evil words, he deployed a vague but potent trope about Jewish patriotism. Accusations of "disloyalty" were flung at Jews in Nazi Germany and have been used to smear Jews around the world. Trump wasn't specific about the loyalty Jewish Democrats were violating. To Israel? To Judaism? To America? To Trump? He subsequently explained to reporters Wednesday that he had meant that those who support Democrats are disloyal to "Jewish people" and to Israel. He did not explain why he should be considered a proper judge of Jewish Americans' obligations.

The uproar over Trump's remarks drew press attention away from rising evidence that the US is headed for an economic meltdown. The economy has been his main claim to presidential success. On the very day he shouted-out to anti-Semites, Trump also admitted that more tax cuts are being considered as a way to halt the slide into recession.

Confusing and outrageous statements are key to Trump's style of attention-seeking, which he refined over decades of manipulating the tabloid press in New York City. Back then he would make outrageous statements about his own wealth, plant stories about the famous women pursuing him for romance, and jump into controversies like the attack on a jogger in Central Park, which he exploited with signed advertisements calling for New York state to reinstate the death penalty.

In the jogger case, Trump wasn't so bold as to say the youngsters arrested for the crime should be executed, but the implication was obvious. (It should be noted that they were eventually exonerated of the crime.) The wording meant that Trump could exploit the dangerous anger people felt about the attack, but in an indirect way.

By the time he began his 2016 campaign for president, Trump had perfected his method of attaching escape-hatch-caveats to inflammatory words about groups of people. So it was that he said that a few "good people" were among the immigrants from Mexico whom he described as rapists and people bringing drugs.

With his "lack of knowledge" and "great disloyalty" smear, Trump again picked up his favorite playthings -- dangerous words -- and threw them around recklessly. Those who identify with neo-Nazis chanting "Jews will not replace us" during the awful white nationalist demonstrations in Charlottesville would find in Trump's comment confirmation that he is with them. He expressed a similar sentiment during the Charlottesville crisis when he noted there were "very fine people" among those who carried torches and shouted the Nazi slogan "blood and soil"

Trump's comments are of a piece with the white identity strategy he seems to be employing in his bid for reelection. With his brutal approach to immigration, references to "shithole" countries in Africa, and his consistent attacks on black and brown members of Congress -- like his recent, and repeated, public disparagement of Muslim-American Congresswomen Ilhan Omar and Rashida Tlaib -- Trump plays on white anxieties about a future when they are no longer part of a racial or ethnic majority.

The big problem with Trump's callous and destructive abuse of his office is that it requires regular renewal, intensification and amplification. Renewal comes when he simply repeats an ugly claim to remind us where he stands. Intensification comes when he raises the stakes to make sure he gets the attention he wants. Amplification comes when he adds a new group -- in this case American Jews -- to his hit parade of hatred. With three techniques he keeps drawing attention to himself, and away from serious problems.

It's difficult to say where all this will lead. The only certainty is that Trump will continue along this line. Proof came less than 24 hours after his Oval Office disgrace when he retweeted a notorious conspiracy theorist's claim that Israelis regard Trump as "the second coming of God."

Jews do not believe in a concept like the "second coming," but conservative evangelicals who largely support Trump do. The statement exploits their religious and emotional attachment to Israel in the crudest possible way. Of course, Trump endorsed it.

Hi: 85° Lo: 47°
Feels Like: 46°
More Weather
Clouds increase a bit more on Tuesday, though there will still be plenty of sunshine at times. Temperatures will remain very warm. An isolated sprinkle or shower is possible later in the day, though rain chances are much more likely into Wednesday as a cold front passes.

CVS is one place you can get a coronavirus vaccination