'Have a game plan': Martin Fuchs on the secrets of his success 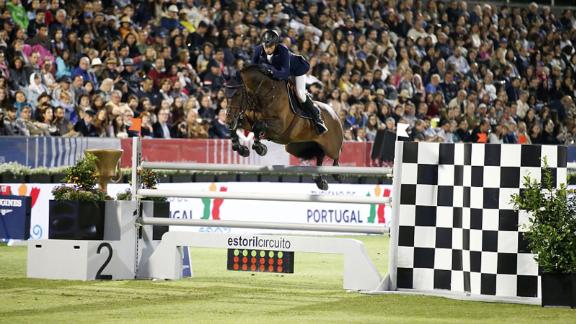 After watching both his father and uncle represent their country at the Olympic Games, it's perhaps no wonder that world-class equestrian rider Martin Fuchs started riding so early.

He was only five-years-old when he saddled up for the first time and he hasn't looked back since, winning mixed-team gold for Switzerland at the Youth Olympics in 2010 and taking part in show-jumping's elite competition.

The 27-year-old has now earned over $1 million competing in the Longines Global Champions Tour (LGCT) and has enjoyed yet another successful season, storming to victory in both the Madrid and Cascais legs of the tour.

But what are the secrets of his success?

READ: Global Champions 2019: Schedule and results
READ: The 'lifetime learner' on juggling her love of horses with academic life

Having started so young, Fuchs already has a wealth of experience and is able to fall back on it during challenging moments.

He also knows that remaining confident and being mentally resilient is equally important.

"A good rider has to stay cool in his head, needs to have a game plan when he goes into the ring and be able to pull it off," he told CNN Sport's EQ equestrian show.

'Willing to work with the rider'

However, showjumping is as much about the horse than it is about the rider and Fuchs is fully aware that forming a bond with his ride can make all the difference.

"The best ones have a big heart and are real fighters," Fuchs continued.

"It's not just about the scope and capability, a lot of it is in their brain and that they are willing to work with the rider."

Fortunately, Fuchs struck lucky with his favorite horse Clooney, even if they did get off to a uncertain start. The pair have won major championships in the past and continue to form a formidable team.

"The first time I rode him [Clooney] at home, I fell," admitted Fuchs. "But ever since then, we've bonded really well."

Watch the video at the top of the page to see Martin Fuchs reveal the secrets of his success.

Some hefty thunderstorms possible at times this week