Serena Williams pulls out of Cincinnati Masters with back injury 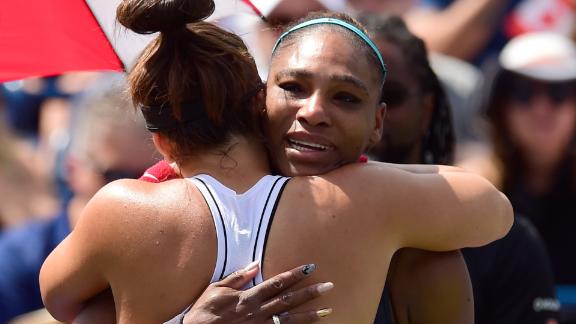 19-year-old Canadian tennis player Bianca Andreescu comforted legendary athlete Serena Williams when she had to forfeit due to an injury during the Roger Cup tennis finals.

Serena Williams has withdrawn from the Cincinnati Masters with a back injury.

The 23-time grand slam champion and two-time winner of the Cincinatti tournament failed to complete her match against Canadian Bianca Andreescu in Saturday's Rogers Cup final, citing the same injury.

"I am so sad to withdraw from the Western & Southern Open as it truly is one of the tournaments I most love to play," said the 37-year-old Williams.

"I came to Mason on Sunday and have tried everything to be ready to play tonight, and was still hopeful after my practice this morning. But unfortunately my back is still not right and I know I should not take to the court."

The world No. 8 continued: "I really want to thank the tournament director Andre Silva and the WTA for giving me every chance to play and I also want to thank all the amazing fans here in the Cincinnati area for their support -- it means so much. I promise I'll do my best to back here next year."

In July, Serena was defeated in straight sets by Simona Halep in the final at Wimbledon while in January she was knocked out at the quarterfinals in the Australian Open.

This latest injury setback comes just two weeks before the US Open starts on August 26 in New York.

She will be hoping for a full recovery in time for the start of the tournament she has won six times, the last triumph coming in 2014.

If Williams wins the US Open she will tie Margaret Court's all-time record of 24 majors.

In last year's US Open final, Williams lost to Naomi Osaka, a match that was overshadowed by the US star's controversial spat with umpire Carlos Ramos.