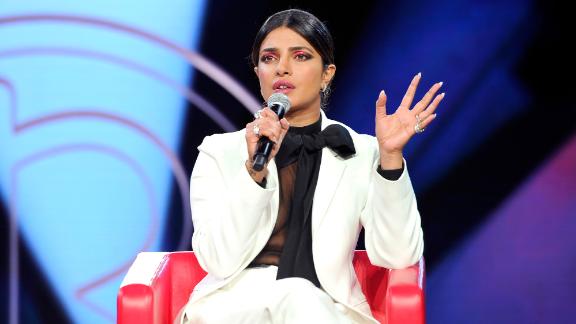 A woman confronted Priyanka Chopra at a beauty event in Los Angeles, criticizing the Indian actress and UNICEF Goodwill Ambassador for a tweet she posted in February during a serious escalation of the conflict between India and Pakistan.

Malik's accusation referenced an incident from late February, when India and Pakistan, both nuclear powers, teetered on the brink of war following the Indian bombing of a Pakistani village. "Jai Hind #IndianArmedForces" (Hail India and its Armed Forces), Chopra had tweeted then.

The confrontation happened in the most unlikely place: the BeautyCon summit held in Los Angeles.

But, significantly, the exchange between an Indian actress and a Pakistani questioner also happened at a time when India and Pakistan seem to be once again at the brink of war.

On August 5, Prime Minister Narendra Modi's Bharatiya Janata Party, which has long wanted to make India a Hindu nation, announced the sudden abrogation of Article 370 and 35A of the Indian Constitution. These provisions (put in place when India and Pakistan were partitioned in 1947) had long granted autonomy to the disputed regions of Jammu and Kashmir, which straddle the border between the two countries. With their repeal, the restive region is now directly under the thumb of the BJP, which has also recently grabbed for itself the unilateral power to declare any individual a "terrorist" without any sort of due process.

"War is not something I am really fond of, but I am patriotic," Chopra went on to say to Malik.

But there should be a line drawn between being patriotic and showing sympathy for the Kashmir predicament. Chopra, between her tweet, the condescending way she began her response to Malik, and the fact that she even welcomed Modi to her wedding to Nick Jonas, shows that she has no sympathy for suffering Kashmiris.

This emerging interpretation of "patriotism" as a justified turning away from the plight of suffering Kashmiris, or Muslims or anyone whom Modi doesn't like is emblematic of what political scientist Kapil Komireddi calls the "cult of Modi."

In Bollywood, this "cult of Modi," with its fervent Hindu zealotry, has set itself to the task of producing films that support the BJP agenda, serving almost as an unofficial propaganda arm of the ruling party. Unsurprisingly, then, even as thousands of troops were marching into Jammu and Kashmir and eight million Kashmiris were aghast at being isolated and silenced, Bollywood film producers had already registered Kashmir-related film titles that they wanted to get under production. These include: "Kashmir is Ours", "The Tricolor (Indian flag) in Kashmir" and "Article 370." In the words of the producer of the Modi biopic who has also registered some of them, "I wanted to explore why one state was granted such privileges. But after the historic redrawing of our map by our Prime Minister Narendra Modi, I have just found the perfect ending for my film. From a film based on history, it is now going to be a historic film."

Since the constitutional abrogation on August 5, the eight million residents of Kashmir have been isolated from the world, with, according to the New York Times, nearly all communications to the outside world, from internet to cell phones and land lines, completely cut off. Curfews keep one and all indoors most of the day. Reports from the few journalists that have been permitted access "found a population that felt besieged, confused, frightened and furious at the seismic events of the week," according to the New York Times. Inhabitants have to beg one or another of the nearly 40,000 soldiers deployed to the region for permission to purchase necessities like milk; baby food is said to be running out in the Valley, and at every break in the curfew hundreds line up for a chance to use one of the landlines that the soldiers have permitted to remain connected.

There is one man who could halt the drumbeat of war in South Asia and he is neither Indian nor Pakistani but American. On July 22, 2019, American President Donald J. Trump played host to Pakistani Prime Minister Imran Khan. At the press conference that followed the meeting, the Pakistani Prime Minister noted that "only the most powerful state in the world, headed by President Donald Trump" could bring the countries together. For his part, Trump agreed, adding that Prime Minister Modi had also made a similar request. "I think they'd like to see it resolved and I think you'd like to see it resolved," Trump said in July. "If I could help, I would love to be a mediator." According to the Indian Government, Modi did not make the request, a fact they emphasized precisely because Trump's intervention would bring India's power-grab more squarely in the international spotlight.

It is precisely for this last reason that President Trump should act on his offer to mediate.

As the Indian reaction to his offer, and even Priyanka Chopra's dismissive condescension toward the questioning of her own and India's position, demonstrates a callous lack of empathy by a UNICEF Goodwill Ambassador. Ironically it also seems to imply that this goodwill ambassador (like the Indian Government) would prefer that the international community continues to ignore the situation. Too deeply immersed in the cult of Modi, many Indians are not interested in saving Kashmiris, and so others must keep their commitments and step up to the plate.

By car, by foot, by horse: Search ongoing for on-the-run kangaroo in Alabama

6 Dr. Seuss books won't be published anymore because they portray people in 'hurtful and wrong' ways

2A and 5A Basketball Semifinals