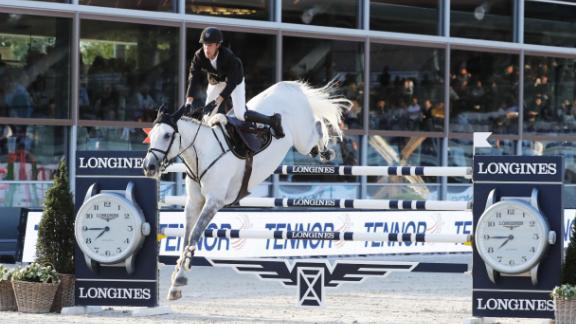 Showjumper Maikel van der Vleuten delighted the Dutch crowds as he clinched a home victory at the 2019 LGCT Grand Prix in Valkenswaard.

Maikel van der Vleuten delighted the Dutch crowds as he clinched a home victory at the Longines Global Champions Tour for the world's top show jumpers in Valkenswaard, Netherlands.

The 31-year-old Dutchman and his horse Dana Blue triumphed in a jump-off for eight riders at the sprawling Tops International Arena, in the southern part of the Netherlands.

Belgian rider Olivier Philippaerts and H&M Legend of Love finished second at more than half a second back, while Kevin Staut of France and For Joy van't Zorgvliet HDC were third, 0.64 seconds behind van der Vleuten.

After a close second-place finish in Madrid in May with Dana Blue, van der Vleuten clinched the title in Monaco in June with another horse, Beauville Z.

He was full of praise for Dana Blue, an 11-year-old gray Dutch Warmblood van der Vleuten has been riding since she was 6.

"She is a great mare, she always fights for me," he said. "It's a careful horse and she is a natural, very fast horse, and that's what you need these days. If you see how many good riders there were in the jump-off, it's not easy to make the difference, so Dana Blue is a horse that can help me a lot with this."

READ: Edwina Tops-Alexander on the secrets of her success

READ: Jennifer Gates: The 'lifetime learner' on juggling her love of horses with academic life

After Philippaerts took the lead at the start of the jump-off with a clear round aboard H&M Legend of Love in a time of 37.34 seconds, van der Vleuten knew he had to go for it as there were still four riders left to go after him.

Tied with Philippaerts for most of his ride, the Dutchman would overtake the Belgian with an angled approach to the penultimate fence, to finish in a lightning-fast time of 36.80 seconds.

But he admitted he was feeling anxious as he watched the remaining riders try to beat his time from the warmup arena.

"You can't do so much anymore after your own round," said van der Vleuten. "These days, you haven't won before the last rider comes through the finish line."

Three riders came and went, but no one was able to come close to van der Vleuten.

Was the final rider, France's Julien Epaillard, about to spoil the Oranje party?

The Frenchman put down a solid ride, until Virtuose Champeix struck down to fences close to the finish line.

A loud roar rolled through the packed arena, while van der Vleuten and his father shared a hug after it became clear the event would have a Dutch winner for the second straight year.

His home win moved van der Vleuten into fourth place on the overall LGCT leaderboard, with 237 points. With three more events to go, Belgium's Pieter Devos remains the overall leader, with 266 points. Britain's Ben Maher, the defending champion from Britain, is second with 252 points, while Staut moved up to third place with 239 points.

"I'm very happy to still be in the lead," said Devos, who finished in 11th place in Valkenswaard. "These coming events will decide what's going to happen. So I must be there with a top horse and try to be as good as possible again. I am not going to give it away. Put a bit of pressure on."

Although Philippaerts missed out on the win, his second-place finish earned him a ticket to the season-ending Prague Playoffs, from November 21-24.

"It was a very happy second place, and qualifying for Prague, in the end it was a good day," the Belgian said.

Georgina Bloomberg of the United States became the only owner to win a leg of the Global Champions League for teams as New York Empire triumphed in Valkenswaard.

The New York team produced four clear rounds over two days, and took the win as it finished four seconds ahead of Cannes Stars, who were also on two double clears. The Paris Panthers were third, with four penalties.

"This is a team I really believe in, and I really wanted to pull through, not just for my horse but for my amazing teammates," said Bloomberg, after her team took its first victory of the season.

Her Israeli teammate, Daniel Bluman, agreed, saying Bloomberg "delivered a beautiful round and I knew what time I had to do to be better than the current leaders. I felt the nerves, but it's good to feel those nerves. It's a fantastic feeling and I'm really happy that I'm able to share this with Georgina. She puts in a lot of hard effort for this and for us, and we've been really wanting it so it's great."

On the overall GCL leaderboard, the St Tropez Pirates are now joint leaders with the London Knights, as each team has 272 points. But the Knights are just ahead in the ranking due to their higher number of wins this season, according to the GCL website. The Shanghai Swans are in third with 260 points.

The next leg of the Longines Global Champions tour will be held in Rome from September 5-8.